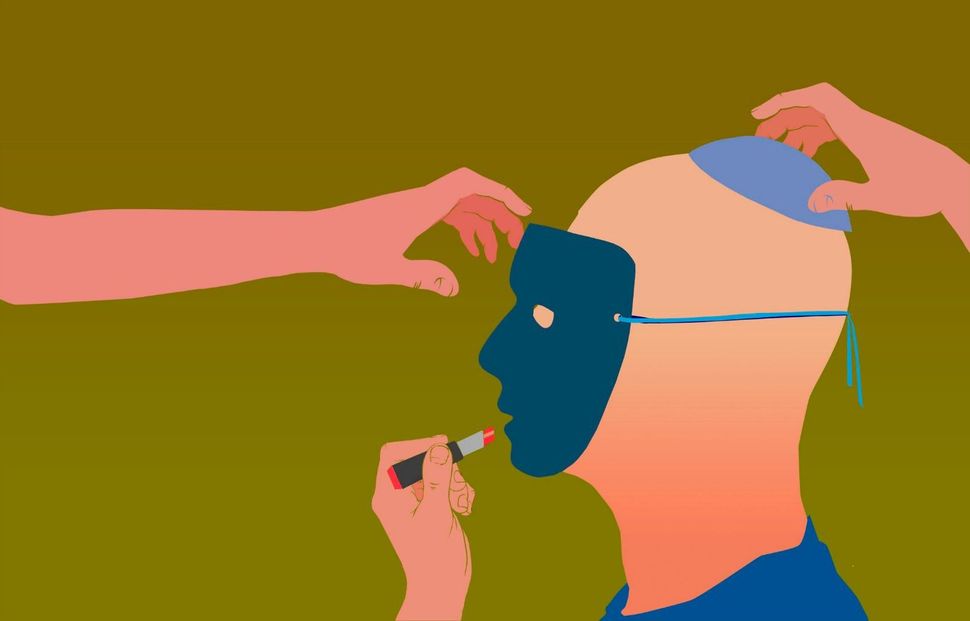 I’ll start with an old joke. Mr. Rosenbaum enjoys cooking a steak on his outdoor barbecue grill every Friday afternoon, for his family’s Sabbath meal. But because he is the only Jew in a very Catholic neighborhood, the smell of the cooking meat drives his neighbors — who are forgoing meat on Fridays during Lent — a little crazy. They ask him to stop.

Instead, he converts to Catholicism. The priest sprinkles some water on him and says “You were a Jew. Now you are a Catholic.”

The next Friday, though, he is at it again, grilling a juicy steak, its meaty scent tantalizing the neighborhood.

A few of the residents stomp over to Mr. Rosenbaum’s backyard to complain that he is violating his new religious edict. And there he is, addressing the grill as he sprinkles it with water: “You were a cow. Now you are a fish.”

As I’ve tried to make sense of the overheated national public conversation about racial and gender identity in the past few weeks, about Caitlyn Jenner and Rachel Dolezal and who gets to choose one’s identity, I realize that what’s missing is this simple verity: a cow does not suddenly become a fish. We don’t overnight become someone else, any more than Mr. Rosenbaum can sprinkle some water, wave his spatula, and magically transform what’s on his Shabbat dinner plate.

This is a time of tremendous social fluidity, when a substantial number of Americans choose their religious affiliations and beliefs rather than inherit them, when gender can be reassigned and race reimagined. But though we rejoice as social barriers fall, we can’t escape the anxiety that comes with such disruption. I know I can’t. I’m of an age when I’m still getting used to hearing “her wife” and “his husband.” It’s a long learning curve.

But I also know that we Jews have centuries of experience with personal transformations. We have laws and traditions about religious conversion. We have fresh, thick memories of immigration. We know what it’s like to reinvent ourselves, individually and communally.

From this, I draw three interlocking values.

Trust. About five years ago, the Rabbinical Assembly of the Conservative movement tried to define what proof is required of a person claiming to be Jewish before recognizing that individual as a Jew and permitting him or her the rights and privileges that come with it. It’s a subtle argument, with a profound foundational aspiration: “We affirm that trust is the default position.”

There are many caveats — these are, remember, Conservative rabbis bound to strike a middle ground between ancient law and modern sensibilities, no matter how mushy that ground might be. But still, they say, unless there is reason to be suspicious, we are not to question another person’s Jewishness.

Or, we can easily extrapolate, another person’s gender. Or race. So much of the sniping, inane questioning and public shaming directed at Jenner, Dolezal and others could be eliminated if only we followed this wise dictum. Individuals get to define themselves — as long as they observe the next verity.

Honesty. I want to be careful when speaking of the uproar about Dolezal’s racial identity — does she get to call herself black? — and the gender transition of Bruce to Caitlyn Jenner in the same sentence. To conflate the two risks equating them. Dolezal is an isolated story of a troubled woman who seemed to invent an identity in a way that offended those she claimed to want to help. Jenner, by contrast, represents a fractional but genuine movement of trans people demanding acceptance, most of whom don’t have access to the media machine that made her coming out a trending phenomenon.

Jenner was a celebration of individual honesty. Dolezal’s story infuriated because it seemed so inauthentic.

The Jewish directive here is honesty. That’s why the ancient rabbis frowned upon those who converted just to marry or for perceived economic benefit. In contemporary terms, this helps to explain — but in no way justify — why the cruel barriers erected by the Israeli rabbinate over conversion are politically palatable. With Jewish identity comes the automatic privilege of Israeli citizenship, and Israel, like just about every desirable nation on the planet, seeks to control and restrict who gets to be a citizen.

Trust. Honesty. Who can object? But there’s a third Jewish value that is more challenging to adopt in contemporary culture.

Community. You can’t become a Jew on your own; conversion rituals must be done in front of three people. Identity entails both an individual choice and a communal response.

As one rabbi told me: “Your own personal sense of identity and $3.75 will get you a no-foam latte. It’s not enough to say ‘I am who I say I am.’ It’s a two-way process. The community must welcome someone in.”

In other words: Mr. Rosenbaum can call his steak whatever he wants, but he and his neighbors need a common language to describe the food in front of them — and to live together with some degree of comity.

This explains the ferocious response to Dolezal’s assertions of blackness and some of the more restrained criticism of Jenner’s provocative coming out photographs. Some in their respective communities didn’t speak the same language. African-Americans challenged whether Dolezal could claim a black inheritance when she was brought up as a white girl, while some feminists decried Jenner’s choice of a sexy bustiere as her womanly ideal.

Identity is not simply a statement of who I am, but a recognition of who I am in relation to others. As the binary choices of the past melt away in favor of a freer, less confined world, it’s all the more important that we are honest, that we trust each other and that we take into account the sensibilities and needs of our community.