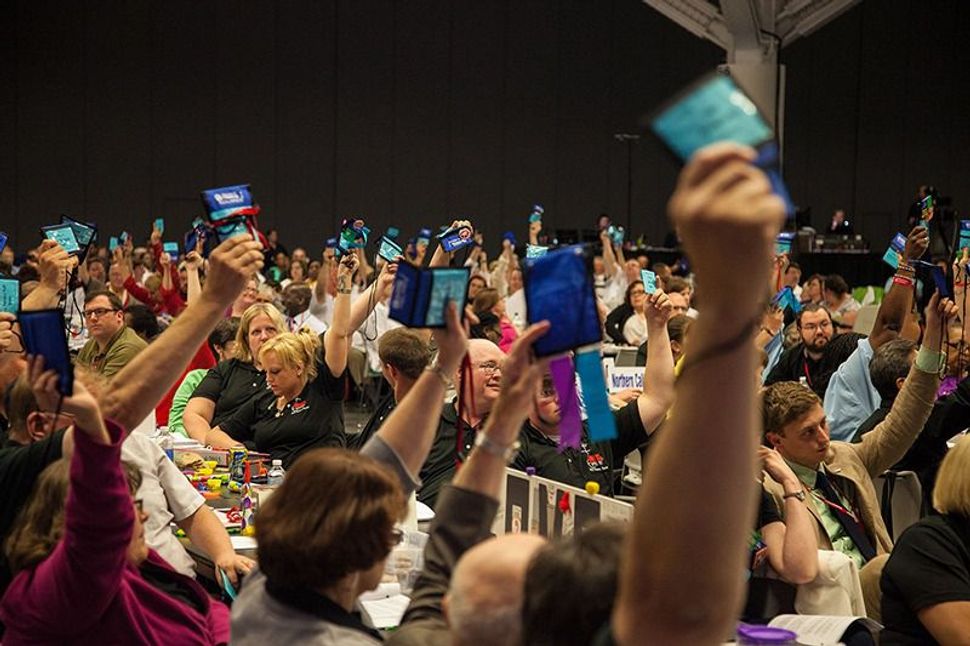 It is an uphill battle for a social movement to bring about change, but once a tipping point is reached in public opinion, the victories come quickly. After decades of activism, the gay rights movement won a historic victory last week with the Supreme Court’s decision that same-sex marriage is a constitutional right. Not very long ago, it seemed inconceivable that the LGBTQ movement could win such victories.

Another movement for equal rights, the Palestinian struggle for justice and freedom from Israeli occupation, is currently facing significant opposition. But as with the LGBTQ movement just a few years ago, the tides seem to be shifting.

The United Church of Christ has just voted to boycott and divest from Israeli occupation, becoming the second mainline U.S. church to take action to end its complicity with Israeli human rights abuses. Last summer, the Presbyterian Church voted to divest, and two more churches, the Episcopal Church and Mennonite Church, are considering similar steps at their conventions this week.

Change did not come easily, but after decades of organizing, the marriage equality movement finally reached a tipping point and victories came from all sides. As a gay Reconstructionist Jew I was proud that my community was a pioneer in ordination of LGBTQ rabbis and recognition of our spiritual unions but it was agonizing to see how slowly other movements in Judaism adapted. Of course, just before things started to change is when our opponents fought the hardest, shouted the loudest and created the most outlandish projections of what would happen if LGBTQ marriages and adoptions become legal. Guess what — none of them came true.

The movement for justice and equality for Palestinians is at a similar place right now. After years of being ignored and minimized, the boycott, divestment and sanctions (BDS) movement is now being fought tooth and nail by those who wish to preserve the status quo of occupation. At the state and federal level, legislation is popping up daily to condemn this movement, hundreds of millions of dollars are being pledged to fight student activists, and Israeli leaders are calling the movement a strategic threat.

Last June I had the honor to attend the General Assembly of the Presbyterian Church as part of a delegation from Jewish Voice for Peace to show our Presbyterian brothers and sisters that many American Jews are critical of Israeli policies. Some of us support divestment, believing that only through external pressure can Israel be persuaded to end the occupation and create full freedom, political and human rights for all residents of Israel and Palestine.

At the Presbyterian GA I had a number of one-on-one conversations in which I explained that my personal support for BDS is based on 10 visits to Israel and Palestine, including many interactions with residents on both sides of the so-called Green Line, where I learned the hard truths about the occupation. After studying the history of anti-Jewish discrimination and migration it is heartbreaking for me that my people have become the oppressors.

I recently addressed a progressive Christian gathering here in Northern Virginia and after my talk a Presbyterian Minister told me that she supported her church’s decision to divest from companies profiting from the occupation but worried that it would affect the strong interfaith relations in her community. Now, almost a year later, she reported that the communities still meet regularly and work together on issues of mutual interest. The church found that making the choice to align their investments with their values did not mean destroying positive relationships with their Jewish neighbors.

As American Jews, we have a particular responsibility to take action to end our complicity with Israeli human rights abuses. The U.S. gives Israel more than $3 billion in military aid each year and shields Israel at the U.N. and elsewhere from the diplomatic consequences of its actions. Divestment is not about singling out Israel; it is about leveraging the special influence and responsibility that we have to make change in Israel.

As a gay man I know the power of public opinion and concerted action to bring change, and as a Jew I believe that I am acting in the best tradition of my people in condemning oppressive Israeli policies and calling on all people of good conscience to join me in working for full rights for all residents of Israel and Palestine.

Seth Morrison, an LGBTQ activist, resigned in 2011 from the Washington, D.C. Board of the Jewish National Fund in protest over repeated evictions of Palestinians from their homes in East Jerusalem.