Hamas, Under Fire from ISIS, Fractures Into Many Dangerous Pieces 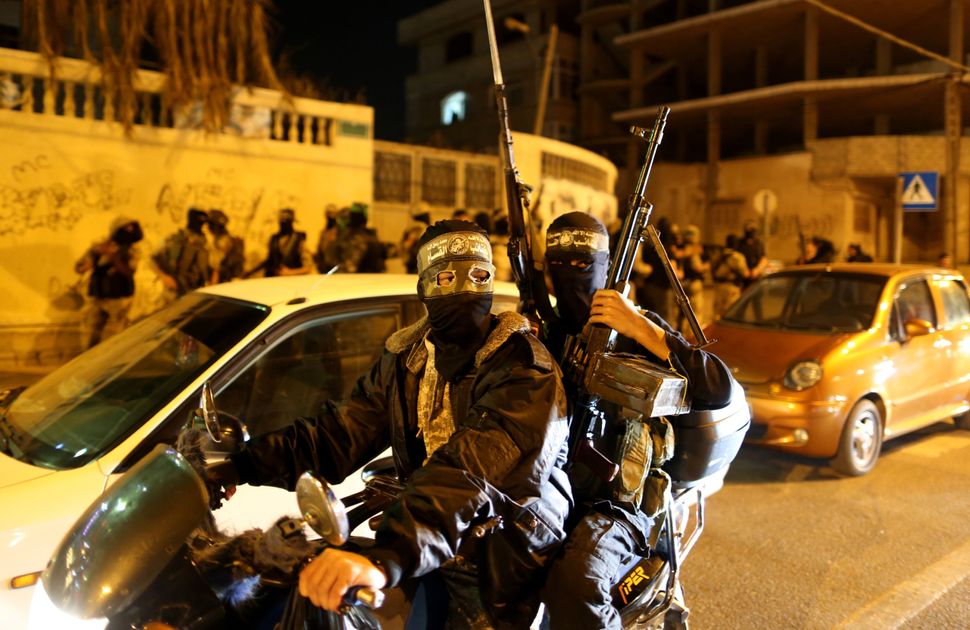 ISIS, the self-styled Islamic State, released a new video on Tuesday in which it threatens to destroy Hamas, accusing it of secularism, of cooperating with Shiite Iran and Hezbollah and of fighting for land and flag rather than for divine Sharia law.

The video also vows to “uproot the Jews’ state,” Israel, and hints that its battles in Iraq are merely a stepping-stone to the greater goal of capturing Jerusalem and “liberating Palestine.” Quoting the deceased founder of what became ISIS, the Jordanian-born Palestinian terrorist Abu Musab al-Zarqawi, the video declares: “We fight in Iraq, but our eyes are lifted toward Jerusalem.”

Coming a day before the massive, multipronged attack on Egyptian military bases across the Sinai peninsula by an ISIS affiliate, the video is a dramatic reminder of the bloodthirsty organization’s determination to upend and remake the existing order in the Middle East, including by declaring war on other Islamist movements.

At the same time, it’s a stark illustration of the contradictory forces acting on Hamas and within Hamas. While the political wing of the Palestinian Islamist party has in recent months been actively seeking rapprochement with Saudi Arabia and Egypt, as well as a rumored effort at détente with Israel, its military wing has been rebuilding its broken ties with Iran, the arch-enemy of all three.

It now appears that at least some elements within the military wing were providing assistance to the massive ISIS terrorist attack on Egypt, including weapons, training, logistics and evacuation of the wounded to hospitals in Hamas-ruled Gaza, which borders Sinai. The attack came, as noted, the day after ISIS publicly declared war on Hamas.

Mordechai has been the point-man for the past half-year in the indirect dialogue that Israel is widely reported to be conducting with Hamas, mostly via Qatari intermediaries, over stabilizing relations between Israel and Hamas-ruled Gaza. Hamas has been aiming for a long-term truce of five to 10 years with Israel, though Israel’s goals were more modest.

It’s not clear how the disclosure of the Hamas link to the ISIS attack will impact the dialogue.

It had seemed clear until now that Israel’s dialogue was with the political wing of Hamas, which is headed by the organization’s secretary general, Khaled Meshaal, based in Qatar, and his deputy, Moussa Abu Marzouk, based in Cairo. The political wing has also been engaged in a more open dialogue with Saudi Arabia and Egypt, aimed at improving the relations with those two countries, which lead the pro-Western bloc of Sunni Arab states. They’re also the main Arab countries pressing for an Israeli-Palestinian peace agreement. A Hamas delegation from Gaza was in Cairo as recently as early June to conduct another round of negotiations toward rehabilitating the soured Hamas-Egypt relationship.

The dialogue with Israel — denied by both parties, but reported too frequently and in too much detail for the denials to be taken seriously — may have been at least partly aimed at appeasing Saudi and Egyptian demands for calm in the region. The Saudis in particular view Iran as their most dangerous enemy and are believed to be eager to put the Palestinian issue behind them.

But while Hamas’s political leadership was trying to move toward Egypt and the Saudis, and perhaps Israel, its military wing has been working to restore ties with Iran, the arch-enemy of both Israel and Saudi Arabia. Iran broke with Hamas in 2011, after Hamas sided with the Sunni rebels fighting the Iran-backed Assad regime in Syria. It’s been assumed that the simultaneous movement of one wing toward Iran and the other toward the pro-Western camp was causing strains between the two wings of Hamas.

The disclosure of an operational link between commanders in Hamas’s military wing, the Izz al-Din al-Qassam Brigades, and the Sinai branch of the fiercely anti-Iranian ISIS calls all those relationships into question. It suggests either a rogue element within the military wing or utter chaos at the organization’s strategic planning level.

There’s also a little-known third wing of Hamas that’s been making itself felt in the past year: the semi-independent military wing in the West Bank. More a loose network of cells than a disciplined military organization, it answers after a fashion to a Hamas office in Ankara, the capital of Turkey. The head of the Turkish office, Saleh Aruri, is one of the 1,027 prisoners freed by the Netanyahu government in exchange for Gilad Shalit in 2011.

It was one of the cells in the Aruri network, the notoriously undisciplined Hebron cell run by the Qawasmeh clan, that kidnapped and murdered three Israeli yeshiva students in June 2014, ultimately dragging Israel and Hamas-Gaza into a war neither of them wanted.

That war ended in an Egyptian-brokered cease-fire last August 26. Since then Hamas-Gaza has been working with varying levels of success to enforce the cease-fire on dozens of small jihadi groups, commonly identified as al-Qaeda-inspired, that sporadically fire rockets into Israel, each hoping to collapse the cease-fire and rekindle the war. Tensions have mounted as Hamas arrested and allegedly tortured jihadis in growing numbers.

In early May relations between Hamas and the jihadis in Gaza turned deadly when a Hamas facility in the southern Gaza city of Khan Younis was shelled by a jihadi group based in Sinai. The jihadi group, originally an Al Qaeda affiliate called Ansar Beit al-Maqdis or Supporters of Jerusalem, had switched its allegiance to ISIS last November and changed its name to Wilayat Sinai, the Sinai Province of the Islamic State. Through May and into June Hamas security and Gaza-based jihadis traded gunfire and assassinations.

The Sinai Province organization is the one responsible for the multi-pronged, military-style attack Wednesday. Terrorists with heavy weaponry attacked 15 Egyptian army and police installations and battled for hours, killing an estimated 70 Egyptian personnel before withdrawing. The Egyptian military pursued them to their bases with fighter jets and helicopters.

For the past week Israel had been furiously debating a recent spike in terrorist attacks against Israelis on the West Bank. A shooting attack on Monday wounded four men, one of whom later died. Jerusalem and the West Bank have seen a spate of lone wolf attacks, including stabbings, Molotov cocktails and automobile rammings. They increased after the Temple Mount furor last fall and continued at a low level. The perpetrators tended to be individuals with no organizational affiliation lashing out. Political leaders surrounding Prime Minister Netanyahu claimed the Palestinian Authority was inciting violence through its anti-Israel rhetoric, though sources close to the intelligence community maintained that much of the increase resulted from popular frustration with the stalling of the peace process and fading hopes for Palestinian independence.

The latest spate of attacks, however, came during the Muslim holy month of Ramadan. Netanyahu and Defense Minister Moshe Yaalon had ordered an easing of some restrictions on West Bank Palestinians in honor of the holiday, including access to Ben-Gurion Airport for visits with families overseas as well as broader access to the Temple Mount for Muslim prayers. This week’s deadly attack sparked protests from the settler community and lawmakers from the Jewish Home party, who claimed the easing of movement had enabled the attacks.

But of the last five attacks during June, three were well-planned operations that featured getaway vehicles and fairly expensive firearms. Shin Bet director Yoram Cohen reported to a Knesset committee on Tuesday that the evidence indicated involvement of Hamas cells on the West Bank. The security service this week arrested 40 members of one cell who were allegedly planning more attacks.

Fingers were thus pointed at Saleh Aruri, the Hamas official in Turkey. He was called on the carpet by Turkish leaders in early June, under American and Israeli pressure, and promised to curb attacks. Either he lied, or he has even less control over his troops than was generally believed.

The 16-minute video released this week by ISIS, snippets of which have been translated into English (here) and Hebrew (here), is believed to have been recorded in the last few days in an ISIS-held sector of Aleppo in Syria. The main speaker is said to be Abu Azzam al-Rizawi, described as a senior commander of ISIS’s Aleppo division.

The reference to Abu Musab Zarqawi is telling. Zarqawi, who was killed in Iraq by American troops in mid-2006, was a Jordanian-born Palestinian who went to Afghanistan in the early 1990s to fight with the mujahidin and ended up forming his own organization, Jamaat a-Tawhid wal-Jihad, the Party of Monotheism and Jihad. As the Forward’s Marc Perelman reported in 2004, Zarqawi relocated to Iraq, exploiting the chaos in the wake of the American invasion in late 2003 and shortly afterward joined forces with Osama bin Laden’s al Qaeda organization, the first of the al Qaeda regional franchises that have since emerged in Yemen, North Africa and elsewhere. He changed his Tawhid wal-Jihad organization’s name to Al Qaeda in Iraq.

Zarqawi was impatient with bin Laden, however, in part because he viewed al Qaeda as insufficiently devoted to attacking Israel and Jews. Bin Laden originally had no interest in the Palestinian issue. He adopted it in his platform in 1998 after merging with Ayman al-Zawahiri’s Egyptian Islamic Jihad, but it continued to be a low priority. For Zarqawi it was a passion.

Shortly before he died, Zarqawi renamed his organization the Islamic State in Iraq. The organization later crossed the border into Syria, exploiting the chaos of the civil war there, and changed its named again to the Islamic State in Iraq and a-Sham. A-Sham is Arabic for Greater Syria, which traditionally includes Lebanon, Jordan and Israel. The area was known in 19th century English as the Levant. Hence the dual acronyms ISIS and ISIL).

Among the video’s pithier quotes:

“We will uproot the state of the Jews by its roots. And you and Fatah, and all of the secularists are nothing and you will be overrun by our creeping multitudes.

“Your corruption will pass before us like froth. And with God’s help the rule of sharia will be implemented in Gaza, in spite of you. We swear that what is happening in the Levant today, and in particular the Yarmouk camp [a Palestinian refugee camp outside Damascus, scene of an ISIS massacre of Hamas members], will happen in Gaza.

“Honor and power do not come from the missiles that they fire at Israel. Truly the jihad will be the establishment of the government of God. The leader Abu-Mussa al-Zarqawi said: By the grace of God we fight in Iraq, but our eyes are lifted toward Jerusalem. We will take genuine steps toward the liberation of Palestine through the arena of Iraq.”

The ISIS video with English subtitles:

Hamas, Under Fire from ISIS, Fractures Into Many Dangerous Pieces