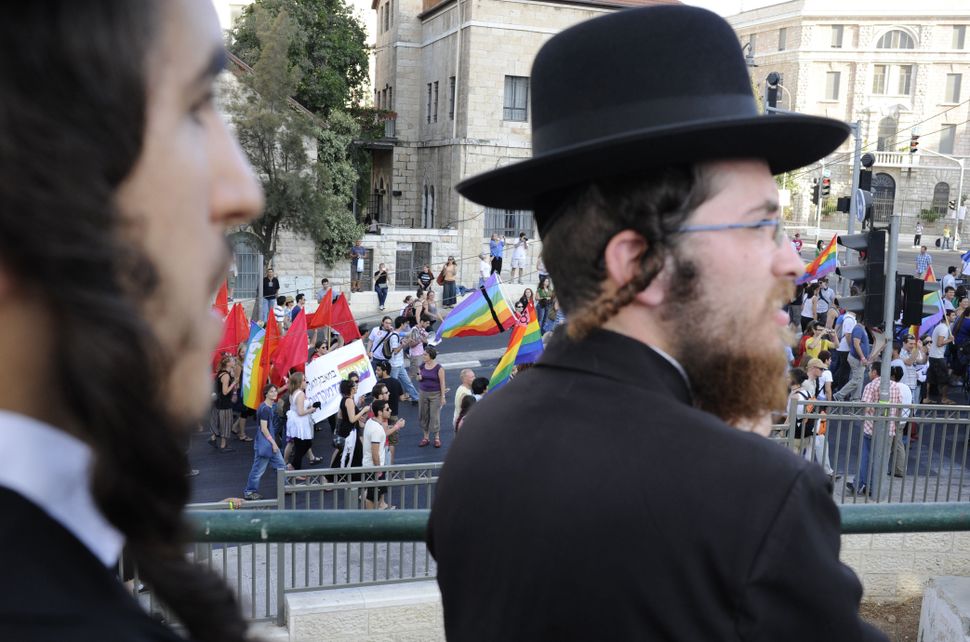 The Orthodox conversation over the Supreme Court’s gay marriage decision reminds me why I am Modern Chassidish and not Modern Orthodox.

There are many differences between these two streams, but the defining distinction is this: their views differ greatly over the role of Halacha (Jewish law) in religious life. The Modern Orthodox Jew experiences the world exclusively through the prism of Halacha, while the Modern Chasid’s view is broader and more encompassing. Halacha is what informs and inspires the Modern Orthodox observer. It is also the exclusive barometer that he or she uses to determine the validity of one’s life and legitimacy of one’s choices.

On the other hand, for the Modern Chasid, Halacha is merely a framework, a way of life that creates an infrastructure in which the religious persona grows and flourishes. The Chasid’s purview encompasses much more than the observance of commandments. He allows for a broader mix of theological considerations to inform his religious stances and attitude towards others.

So far, the Orthodox leadership’s reaction to the Supreme Court’s decision has been exclusively, narrowly halakhisist (legalistic) — very much in line with how the Vilna Gaon would have reacted. The response of Chassidic rebbes who follow the Ba’al Shem Tov would have been very different, in tenor and content. That is the voice sorely missing in our community. While we are blessed with plenty of rabbis opining about the decision and its consequences, we are desperately missing the voice of a rebbe.

The plight of gay people presents a huge challenge to the Orthodox believer. The rabbi and rebbe have very different clerical roles to play in this religious conundrum. The rabbi’s role is to judge; the rebbe’s is to provide pastoral care. The rabbi, guided by the Talmud and codes, opines and adjudicates, while the rebbe, whose halachic thinking is augmented by a spiritualist orientation, shuns judgment in favor of spiritual care.

While the Chassidic theologian draws on many traditional sources, there are two that stand out as distinctly potent. One is an insightful lesson taught by the wife of Rabbi Meir in the Talmud. Advocating a nuanced approach towards sin, she admonished her husband, who mistakenly conflated sin with the sinner. Her understanding of the pastoral task was that the devout can separate the person from his or her behavior, looking past their misdeeds to see the humanity inherent in every human being.

Along these lines there is a Talmudic statement that lauds the criminal who pleads for divine support before committing a crime. This provocative teaching intimates that there can be spiritual significance even in those moments when an individual’s life is not in consonance with Halacha’s religious prescripts.

While the halachisists explore the minutiae of Jewish law to see if Orthodoxy can make room for the gay people in their midst, the rebbes have a different role to play. The rebbes need to be these people’s spiritual chaperones, walking alongside them on the arduous journey of reconciliation between their religious convictions and their inherent sexual predisposition, in the process helping them sanctify this torturous journey.

There’s a story I like about Rabbi Levi Yitzchak of Berditchov. When walking down the street one day he noticed a follower saying his daily prayers while oiling the wheels of his carriage. Instead of reacting with opprobrium, he set aside his legalistic discomfort, turned towards the heavens, and said: “God, look at your wonderful people! They love praying so much that even while they are oiling the wheels they still turn to you in prayer and supplication.” As a Chasid he allowed his pastoral sensitivity to trump his judicial sensibilities. Instead of scolding the Chasid for his legalistic shortcomings, he chose to sanctify that very sin, believing that such a stance will lead to greater spiritual growth.

The legalistic voice has dominated the Orthodox public sphere — but our gay brothers and sisters deserve to have the harshness of moral certitude dulled by the tenderness of spiritually infused pastoral care. History will determine how the journey of Orthodox homosexuality will turn out. The Modern Chasid’s role is to ensure that this journey, which will hopefully lead people towards greater religious observance, is as sacred as it can be. I hope that the important voice of the rebbe will soon be added to the cacophony of religious voices on this issue. Our gay brethren deserve and desperately need it.

I, for one, very much look forward to being part of that team. Although I like studying and practicing Halacha, I leave the legalism of this particular issue for my rabbinic colleagues who find sustenance in this pursuit. My Modern Chassidish soul leads me in a different direction, gravitating more towards the pastoral angle of this complex issue. Here is where I encounter the divinity embedded in every human being, regardless of deed, creed, or sexual orientation.