Mike Huckabee and the Dangers of Hyperbole on Iran 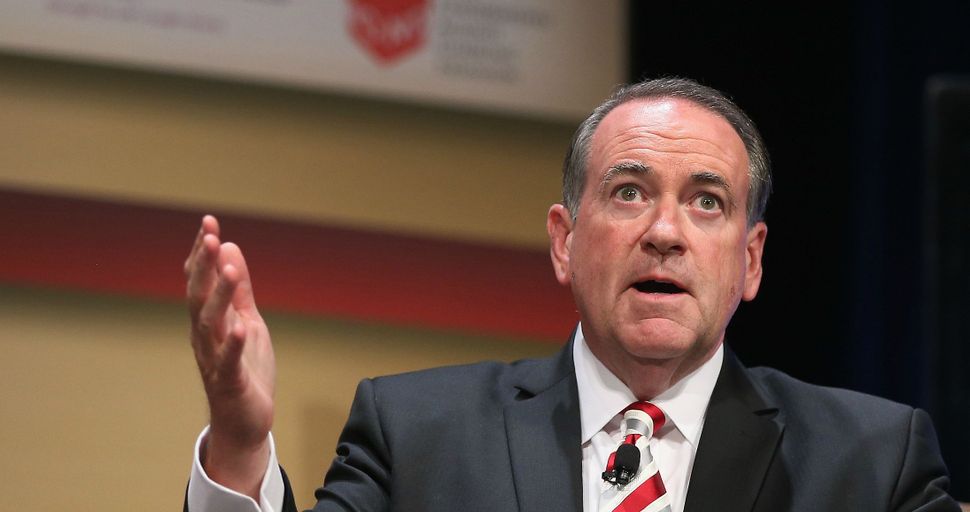 But Mike Huckabee has shown us there are always new depths to plumb. Nothing in the campaign has matched the ugliness of his invoking the Holocaust to malign President Obama’s management of the Iran nuclear negotiations. In a July 25 interview with Breitbart News Saturday on Sirius XM, the former Arkansas governor said the president “is so naïve that he would trust the Iranians and he would take the Israelis and basically march them to the door of the oven.”

In other words, the president is behaving like a Nazi death camp guard.

One could cite many reasons why such talk is beyond the pale. It trivializes the real horrors of the death camps, insulting survivors. It demeans the office of the presidency and aggravates the dangerous polarization of American politics. It frames a critical policy decision as a matter of supporting or opposing absolute evil, which makes reasoned debate impossible at a moment when reason is desperately needed.

Some conservatives have tried to defend Huckabee’s comment by claiming his “implication is not that President Obama is Adolf Hitler,” as Breitbart’s Joel Pollak put it. “Rather, it is that Iran is Nazi Germany and that Obama is leaving Israel vulnerable — just as the U.S. left the Jews of Europe vulnerable to Hitler in the 1930s.”

Well, no. Look at Huckabee’s words. If Obama is marching Israelis to the ovens, he’s doing the job of an SS guard. True, he’s not depicted as Hitler. But he is depicted as a Nazi. That’s the ultimate condemnation in our post-Holocaust world. As Jews and others have argued repeatedly over the years, such analogies ought to be avoided in responsible political debate. They poison the atmosphere. And they’re rarely valid.

Many pundits are pointing to the incident as merely an extreme example of the desperation among Republican contenders as the August 6 GOP debate on Fox News approaches. Fox says it will allow only 10 debaters on the stage out of 15 now running. The selection will be based on standings in an average of five national polls. That puts pressure on candidates to boost their national profiles by generating headlines, by any means possible.

If that’s so, it only reinforces the importance of avoiding Holocaust talk in political debates. The more we’re polarized into hostile red and blue camps, the greater the temptation to use Nazism as a doomsday weapon to silence opponents. If Holocaust references become the norm, the meaning of the historical Nazi experience will be cheapened and eventually lost.

At the same time, let’s acknowledge that the use of Hitler and Nazism as symbolic reference points has been deeply embedded in our culture for decades. In a way we might even view that fact as reassuring. It reminds us that Hitler has come to be seen worldwide as the epitome of evil. In a certain profound sense the lesson of the Holocaust has been learned. Jews should be careful not to fall into a trap of considering Nazism our own “N” word, permissible to us but nobody else.

That’s particularly important right now. It wasn’t Huckabee who introduced the Holocaust into the Iran debate. He’s merely picking up on a theme that entered the discussion years ago. Israel has been warning of the Iran threat since Yitzhak Rabin became prime minister in 1992. When Benjamin Netanyahu took office in 1996 he began escalating the tone in response to an escalating threat.

A turning point came in November 2006 when Netanyahu, then Israel’s opposition leader, told the General Assembly of the Jewish federations in Los Angeles: “It’s 1938, and Iran is Germany.”

He was heavily criticized at home for irresponsible rhetoric, but he stood his ground. If Iran does get nuclear weapons, he insisted, it’s entirely possible they’ll use them to carry out their repeated threat to wipe Israel off the map. It might sound implausible. But Hitler’s Final Solution sounded implausible in 1938. Perhaps it won’t happen. But there’s a chance it will, and that’s a chance that can’t be taken.

Netanyahu is no outlier on this. He and his generals disagree over the best way of tackling the threat, but they agree the threat exists. Indeed, so does the United Nations Security Council. As Netanyahu was delivering his “1938” speech in Los Angeles in late 2006, the council was preparing its first round of sanctions, based on evidence from international inspectors that Iran was violating its commitments not to seek nuclear weaponry. Even Russia and China went along. The debate isn’t whether Iran has sought weapons, but how best to stop it. And sadly, no path is perfect.

Israel’s Ambassador Ron Dermer reiterated that point in an interview with USA Today in which he rejected Huckabee’s statement as inappropriate.

“Look,” he said, “we have a very serious disagreement with the administration on a very serious issue. But what I don’t doubt is the sincerity of the president or his team when they say they believe this deal makes not only America safer but makes Israel safer. Where we disagree is the judgment of actually what this deal is going to do.” It is, he added, “important to conduct this debate in a way that’s befitting of the alliance between our two countries.”

Having said that, Dermer and his boss would do well to take it to heart. If they set a civil tone, others will follow.

Mike Huckabee and the Dangers of Hyperbole on Iran