How Anti-Obama Zealots Went Off Rails on Iran Deal 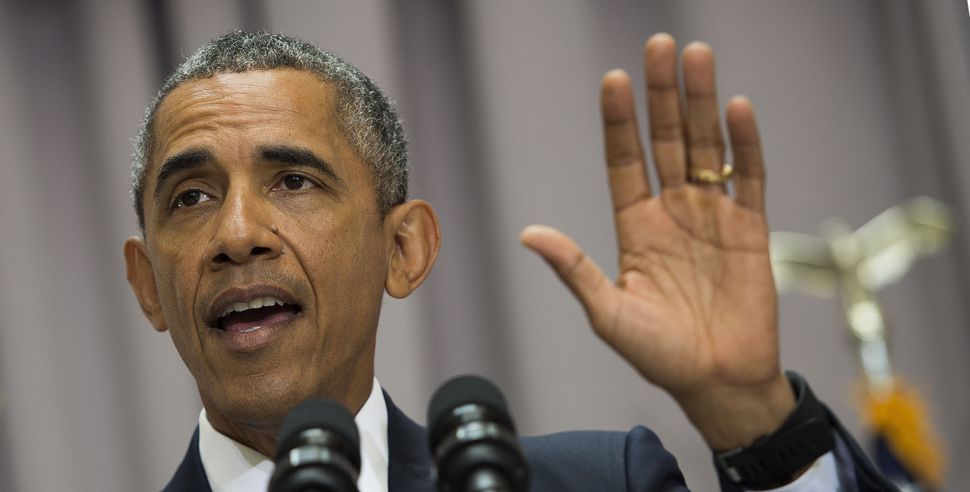 The campaign against President Obama’s Iran nuclear deal tends toward the apocalyptic even when it’s in repose. Right now it’s virtually jumping the rails, plunging into a swamp of anti-Obama conspiracy theory, with a gaggle of conservative pundits openly accusing the president of anti-Semitism.

The charge has been a staple of the extreme far right since Obama first began his White House bid in 2007. Until recent weeks, though, it wasn’t common in the mainstream. Now it’s spreading like a chemical spill in a coal miner’s backyard creek.

As the theory goes, Obama’s recent comment about money and lobbyists mobilizing to stop the deal is actually a veiled reference to Jewish donors and pro-Israel lobbyists. In mentioning them, he’s supposedly trying to silence his opponents by threatening to unleash the anti-Semites.

Not that certain Jewish donors and a brigade of pro-Israel lobbyists aren’t mobilizing to stop the deal. They are, energetically. It’s just that it’s rude to say so. The president is supposed to pretend he doesn’t notice.

Technically, the Jewish community is tangential to the main act. The actual showdown takes place in September on Capitol Hill. The fault line will be partisan, not religious. Until then, though, the theatrics are heavily populated by Jewish activists. Israel’s welfare is Item No. 1 in the debate, at least for much of the opposition.

And lest we forget, the field marshal leading the anti-deal troops is Israel’s prime minister, Benjamin Netanyahu. His deliberate centrality to the drama radically enhances his American Jewish allies’ visibility. In effect, Netanyahu has turned the Iran debate into a global battle of the Jewish people against the great world powers.

Stateside, the Obama-as-anti-Semite theme seems familiar, but it actually surfaced suddenly. It happened July 22, right after the president appeared on “The Daily Show With Jon Stewart.” The president said that if people favoring the deal contacted their representatives, they’d be heard. Indeed, he said, “the same is true on every single issue. If people are engaged, eventually the political system responds. Despite the money, despite the lobbyists, it still responds.”

A neutral observer might read this as a comment on America’s current debate over money in politics and citizens’ feeling of powerlessness in shaping policy. But some Jewish conservatives read it differently.

Lee Smith, right-wing political columnist for the online magazine Tablet, called it a “dog-whistle.” He claimed Obama was “hinting broadly at anti-Semitic conceits — like dual loyalties, moneyed interests, Jewish lobbies — to scare off Democrats tempted to vote against” the deal. He predicted that if any Democrats did oppose it, Obama was “going to tar them as dual loyalists who are willing to send Americans out to make war on behalf of Jewish causes.” That’s a dramatic prediction, based on rather slim evidence. But it’s classic Smith.

Jonathan Tobin, online editor of Commentary, called the “Daily Show” comment a “smear.” When the president predicts that war will result from the deal’s defeat, Tobin wrote, he’s labeling opponents “warmongers.” And since “money and lobbyists” is obviously code for “Jews,” Obama is calling Jews warmongers, ready to send other people’s sons to die.

Tobin further dismissed Obama’s claim that the “only alternative to his appeasement of Iran would be war.” Now, you might think calling Obama’s negotiation “appeasement” is itself a smear, implicitly identifying Obama with Neville Chamberlain, who handed Czechoslovakia to Hitler in 1938. But one man’s smear is another man’s Speaking Truth To Power.

Two days after the “Daily Show” appearance, the hysteria escalated. Secretary of State John Kerry, addressing the Council on Foreign Relations on July 24, fretted that if the Israeli-led opposition campaign successfully sinks the deal, the resulting regional chaos might provoke anger that would leave Israel more “isolated” than ever. That drew a whole new round of hysteria. Kerry’s worry was somehow reinterpreted as a threat. Holocaust polemicist Rafael Medoff, writing in The Weekly Standard, ingeniously combined Kerry’s “threat” with Obama’s “money and lobbyists” to discover that Kerry was threatening American Jews.

As August began, the opponents’ rhetoric boiled over. The president’s August 5 speech at American University, by reasserting American commitment to Israel’s security while noting “temporary friction with a dear friend and ally,” drove them to new heights of fury. Tablet magazine, in an unsigned editorial August 7, said it “can’t stomach” Obama’s “use of Jew-baiting and other blatant and retrograde forms of racial and ethnic prejudice” — a “sickening new development in American political discourse.” The evidence: the “money” and “lobbying” memes from “The Daily Show,” plus some weird new twists. To wit: Obama’s expressed sympathy last January for Democratic senators facing pressure from “donors and others,” transformed into an accusation of “selling their votes to shadowy lobbyists.” Obama arguing the deal was in America’s best interest, reframed as Obama accusing critics “of acting contrary to the best interests of the United States.”

“It’s the kind of dark, nasty stuff we might expect to hear at a white power rally, not from the President of the United States,” Tablet said. Whew.

Not all was gloom and doom. Back at The Weekly Standard, former Bush national security aide Elliott Abrams struck a note of levity, probably unintentional, in an August 8 denunciation of Obama’s supposed flirtation with anti-Semitism. Like Tablet, he revived the January New York Times report about Obama, senators and donors to express shock — shock! — that senators might be doing their donors’ bidding. Like everyone else, he’s in a lather over dual loyalty.

But the laughs don’t stop there. Abrams was perturbed at Obama’s claim at AU that “many of the same people who argued for the war in Iraq are now making the case against the Iran nuclear deal.” Obama warned that if there’s no deal, they’ll soon be calling for war against Iran. Abrams was incensed. He had every right to be. He was one of the most prominent people arguing for war in 2003 and opposing the Iran deal now. Who better than he to deny the charges?

Not that they won’t call for war if it looks like Iran is getting a bomb. Those conservatives have been criticizing Obama for years for being too slow to open fire — in Syria, in Libya, in Iraq. They’ve repeatedly alleged that he can’t be trusted to exercise the military option against Iran, if war becomes necessary. And they’ve proven again and again that they have an extraordinarily low bar for what constitutes “necessary.”

To protest today that war is suddenly the last thing on their minds is silly. To call the accusation anti-Semitic — to cry foul over the suspicion that they might do tomorrow what they’ve done every time before — is hypocritical, and offensively so.

Let’s be clear: Conservatives have every right to advocate their views. Israel’s leader has every right to defend his country’s interests as he sees them, even if others see them differently. Even if he stands alone. But they cross a line when they call others bigots for noticing what they’re doing. And to do so in the name of an American Jewish community that didn’t sign up for this fight is outrageous.

How Anti-Obama Zealots Went Off Rails on Iran Deal