Does ‘Half Chinese, Half Jewish’ Condemn Me To Being Neither? 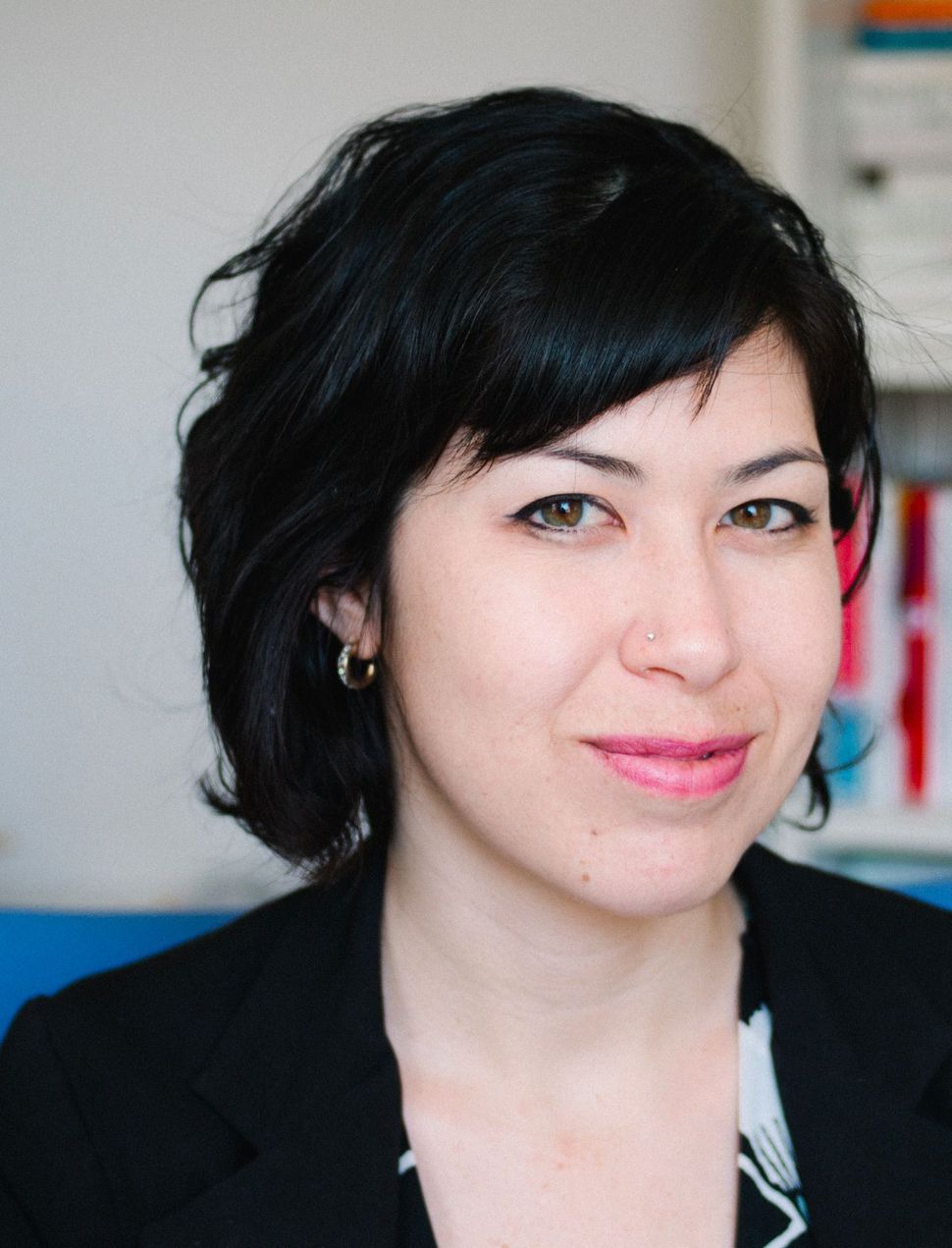 When I was four years old, my father introduced me to his colleague, Jing. “Are you Chinese?” I asked, eyeing her shrewdly. “Yes,” she replied. “So am I,” I said. “And shoe-ish, too!”

My father likes to tell this story, I think, because it illustrates my self-assurance: Even at that young age, I knew exactly who I was.

What I didn’t anticipate was that others might have opinions, too. That hit home recently when I wrote a NPR on being “half-Chinese, half-Jewish.” Suddenly, people on the Internet were dictating my identity to me. “The author is not half Jewish,” one wrote in the comments, citing Orthodox halacha that deems you Jewish only if your mother is. “She is not Jewish at all.” How did he know which of my parents was Jewish? “I Googled her,” he wrote.

Both my cultures had always felt like equal strands in the tapestry of me. Now, I wasn’t so sure. Readers told me I had “glossed over” the question of Asian identity in my article, which focused instead on the complexity of modern Jewishness; that my knowledge of Asian history was so shallow I had made the mistake of referring to matcha green tea powder as Chinese instead of Japanese. (Fact check: Like paper, tofu and karate, it first came to Japan by way of China.) By trying to be both, it seemed, I had condemned myself to being neither.

I know, I know: Never read the comments. But these ones struck a nerve. For the first time, I found myself questioning the dual identity I had for so long taken for granted. After all, I’ve never lived in China or Israel. I speak neither Mandarin nor Hebrew. For me, Asian is orange chicken and silk kimonos. Jewish is loving matzo ball soup, my Long Island-born grandmother, and excuses to exclaim, “Oy vey!” Was that enough? Or were they right that I was really a collection of fragments, an outsider, an imposter?

To answer that question, I decided to examine two moments when I felt most Chinese and most Jewish.

I want the pork buns. I know exactly what they taste like: a heaven of tangy-sweet, barbecued tidbits encased in tender, papery skin. I’ve eaten them dozens of times at dim sum restaurants just like this, stuffing them into my mouth two-handedly like a hungry chipmunk while my Chinese family yells over the table. But their name escapes me.

My mother remembers. “Ngo oi char siew pal,” she says in that strange yet familiar lilt, waving for the attention of the haggard waitress. Her incantation works: a silver cart pulls to a halt before us, and the waitress deposits two buns on our plate. “Xie xie,” my mother says.

Then the waitress looks up, and her eyes linger a second too long. They flash first to my mother, then to my brother and me, her eyebrows arched in an unspoken question: What are we doing here, with her?

We shrink in our seats, suddenly self-conscious. But my mother merely laughs the moment away. “She must think you two are gweilo,” she says: white devils.

My mother has always been my bridge to the Chinese world. The strange thing is, she isn’t particularly Asian herself. While she is ethnically Chinese, she considers herself culturally British; she was raised in Singapore and schooled in the UK. As a result, we were raised on English muffins and English breakfast tea, spelling everything with an extra “u.” It was my Shanghainese stepmother who lulled us to sleep with Chinese fairy tales, prepared authentic Chinese dishes and took us with her to China.

But because my mother feels comfortable here, so do I. Even today, whenever I move to a new city, the first thing I do is visit its Chinatown. Wandering down narrow alleyways, under lanterns and signs displaying Chinese characters, I’m sharply aware of my difference. I can’t read a thing, and as the only white face in the crowd, I get weird gweilo looks from shop owners. I scan for English, my eyes lingering on brightly colored lychee and dragon fruit candies, tastes I recall from childhood but can’t quite articulate. In my own way, though, I feel perfectly at home.

I remember, as a child, holding tightly to my mother’s hand and wandering through Chinatowns just like this. This is my heritage; this is my nostalgia. This is what I grew up with: One foot in, one foot out, straddling the divide. 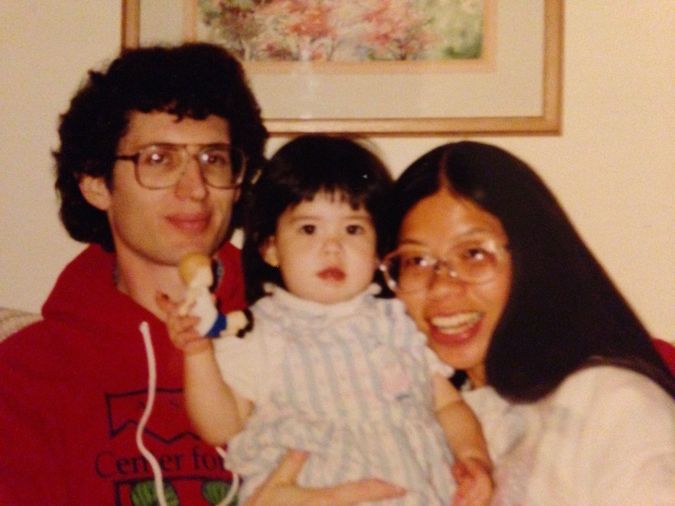 Rachel Gross as a child with her parents. Image by Courtesy of Rachel Gross

My father’s mother’s home was a house divided: two microwaves, two refrigerators, two sets of dishware. Our meals were governed by mysterious rules. We eschewed shellfish and pork; shrimp were the “cockroaches of the sea”; milk and meat could never mix. After brisket, we had to wait a tortuous two hours before eating brownies. The joke in our family was that my grandfather snuck cheeseburgers in the garage.

I understood, in a vague way, that this division had something to do with being Jewish. That because we were Jews, we followed certain rituals: We blessed food before eating it, lit candles on Shabbat, and played with dreidels on Christmas instead of decorating a tree. But in the end, I didn’t understand what being Jewish really meant. Like Chinatown, the whole thing felt somewhat strange and inaccessible.

My grandmother seemed to understand. And because I loved her, I wanted to understand, too. She passed away when I was 15, and I began to wonder: What was it about this religion that held such powerful allure for her?

To me, my grandmother’s devotion to the mysterious laws of kashrut made her more spiritual, more pure; she seemed to live on a different plane. Only later did I learn the truth: that to many, kashrut is pretty damn arbitrary. No one knows whether these laws are God’s way of keeping us clean, or teaching us compassion toward animals, or something else entirely. As my agnostic father likes to point out, his mother’s entire kitchen schema comes down to one line in the Bible: “You shall not boil a calf in its mother’s milk.”

Recently, I asked Helen Kim, a Korean-American sociologist who studies Jewish-Asian heritage with her Jewish husband, what drew her to Judaism. Her answer? “There aren’t as many touch points for a collective Asian-American memory as there are for Jews — especially given that Asia is so large and that there are so many distinct waves of immigration,” Kim said. “But Judaism comes with a text.”

In the end, kashrut might not reflect the values I saw in it. But what it represents is something far more crucial: the Jewish collective memory. Unlike many other communities, Judaism comes with an instruction manual, a set of rules that teaches you how to be a Jew. The Torah tells you everything you need to know: when to fast and when to feast, what to wear and who to marry. That’s an appealing idea: Follow these rules, and a deeper sense of Jewishness will follow.

My grandmother didn’t mind the seeming arbitrariness of kashrut. To her, these rules had a deep, profound meaning. They allowed her to tap into Jewish collective memory, the story Jews tell themselves about who they are. She was following the instruction manual. 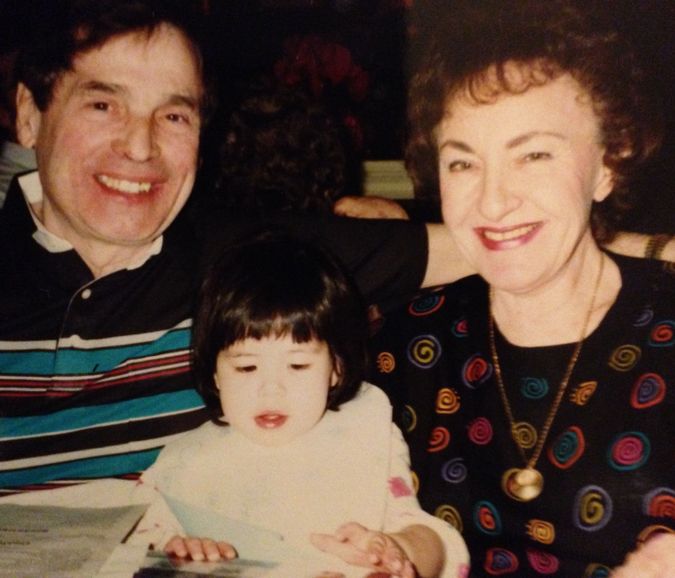 Rachel Gross as a child with her Jewish grandparents. Image by Courtesy of Rachel Gross

There isn’t an instruction manual for how to have two cultures. In some ways, that sucks: It makes it easier for people to criticize you, squeeze you into boxes, or try to poke holes in your identity. But in another way, it’s profoundly freeing. Without a text, it’s up to you how to connect to your heritage. You get to choose which stories resonate, which elements to hold onto. When you start your own family, you get to decide which stories to impart to your loved ones.

Being composed of two such different halves has shaped my perspective. It has taught me to see similarities rather than difference, connections instead of contradictions. Both of my cultures come with amazing food, amazing grandmothers, amazing history. Both are about resilience, roots, tradition. Each is distinct, but each also draws out values in the other. Standing on the margins of myself, I’ve come to realize that it’s never either/or — it’s both/and.

My Judaism is not your Judaism. My sense of Asian identity is likely not yours. I am composed of my own unique fragments and memories, brief glimpses I have gleaned through relatives more connected to the past than I. But those fragments get beneath your skin. They stay and prickle, like shards of a mirror reflecting a larger image. The truth is, I have always felt just as Jewish as I do Chinese. Like the separation in my grandmother’s kitchen, it is the divide that makes me whole.

Rachel Gross is a writer at Slate Magazine in Washington, DC.

Does ‘Half Chinese, Half Jewish’ Condemn Me To Being Neither?