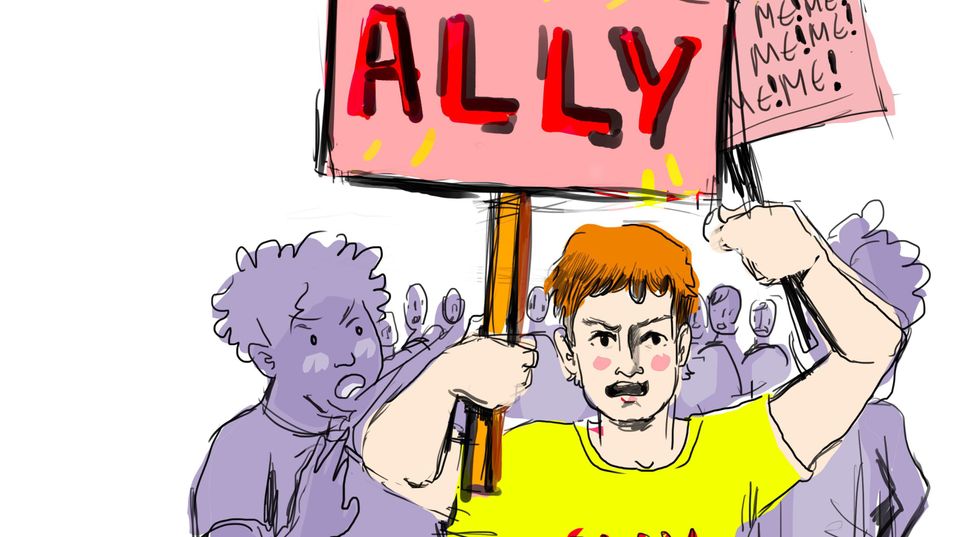 When it comes to Jews of color, allies are definitely needed. But if you want to be an effective ally, there are important things to consider before, during and after the process. If not properly considered, some of these things will lead to major pitfalls.

So what exactly are the pitfalls, and how can you avoid them? Here’s a short list I’ve come up with over my years of training allies.

We have to be careful as to which space is actually ours for the taking. If you’re a white male ally at a women of color protest, it’s not the time to express how you’re not being heard. The women of color beside you haven’t been heard. If their struggles were being validated and properly redressed, there would be no need for a protest.

2. “Hey, oppressed people, let me teach you about how you’re oppressed.”

This one happens to me so many times in a week. I’m just having a conversation with a self-identified white ally, and all of a sudden the person says: “You have no idea what black people in this country go through. I mean, racism is very real in the everyday lives of so many people!” They continue to talk about the experiences of “others” as though they’re experts. Which brings me to #3….

There are a lot of “allies” out there who will go and speak at conferences, synagogues, you name it, having only a handful of relevant experiences from which to speak. Granted, there are definitely allies who know a great deal. But for the most part, when you do this for the media or the general public, you’ve just alienated yourself from a cause by becoming the spokesperson through privilege. You may not realize it, but the reason you’re being called on (and probably paid) to do this is — care to guess? The perpetuation of bias? Ding, ding, ding!

That’s right: It’s much easier for the group on top to hear from someone who has knowledge on a surface level and is part of said group, than it is to hear from someone who can have the deeper conversation and is from the oppressed group. In taking the “expert” role, you could be limiting the ability of all parties to build a sustainable framework that leads to understanding. I’m not saying that there shouldn’t be a space for white people to talk about race — that’s extremely important. But if you end up in this role, make sure to directly connect the group with the actual experts. That would really make you an effective ally.

When you host a speaker, donate to a cause or bring attention to the issues of another and say, “I gave them a voice,” you actually haven’t. In fact, you’re perpetuating the white savior complex, which is fraught with unchecked biases. This is a very, very common trope among white allies in particular.

Remember, no one is ever given a “voice.” In reality, there hasn’t been a proper framework built so that those on the perpetuating side can actually hear the real experiences of people affected by their covert and overt biases. If the framework isn’t built, reconciliation can’t begin.

5. “I posted on Facebook — look at my amazing activism!”

It takes much more than posting on social media to be an activist. You must interact with real people, in person, so that you get to understand the nuance of some situations. If you’re not getting up and talking to people within your group of privilege about the issues, are you really stepping up in a way that’s needed? I understand that some of the best ally work is done behind closed doors. But behind those doors, there are real people having real conversations.

There are tons of readily available books, blogs, lectures and op-eds written by people on the receiving end of bias. And yet, we people of color often find ourselves being asked about resources. It’s not always the time or place to ask those questions, especially if you have yet to form a relationship. Before turning to us, ask yourself: Have I made an effort to seek out resources myself? Have I gone to the library? Have I Googled?

Simply put: No, you can’t. Just like no leaders have ever done anything great without help, thinking this will lead you to pitfalls 1–6. Also, you’ll need to set up a support system for those moments when you need to vent or to process the hard times and experiences that are intense and new to you.

If you’re going to become an ally, you have to make uprooting your personal bias a life-long journey. Being a great ally means that you hold yourself accountable for your part in bias. Everybody has a part, and we all need to own that. If you don’t, you run the major risk of being the perpetrator of bias toward the group you’re claiming, at that point, to help.

We all fall down sometimes. I catch myself saying certain things that go against my personal intent and beliefs. In those moments I’m thankful that I have a number of personal tools to use. I can hold myself accountable for my actions, issue honest apologies and forgive myself. It took me awhile to develop these skills, which need consistent check-ins. As you’re going through this process, be patient with yourself. And remember that even though you may fall, it’s not the end. We still need you!