Time To Save Iraq’s Treasures — By Force, If Necessary 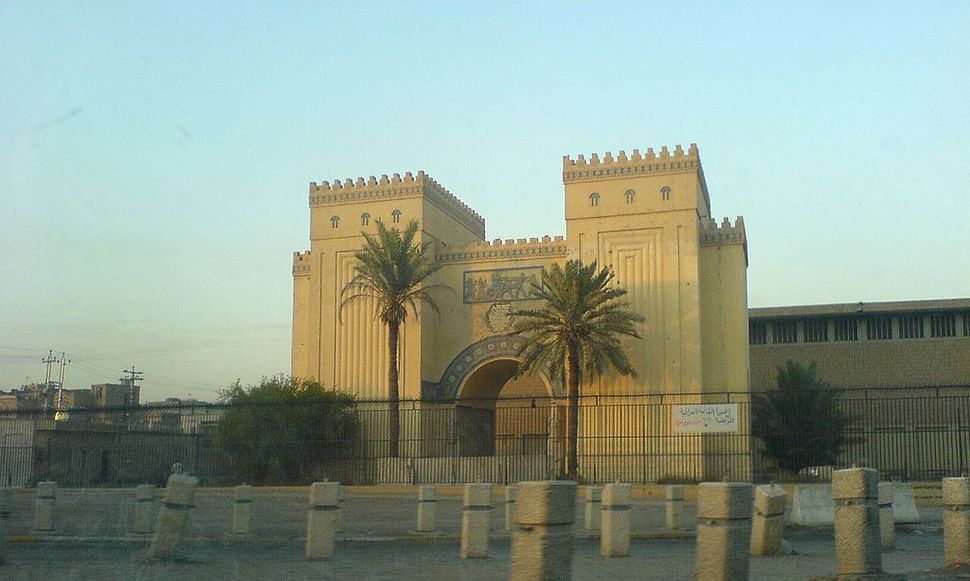 The National Museum of Iraq Image by Wikipedia

(JTA) — Seeing that no one was investigating the looting of Iraq’s National Museum in the wake of Saddam Hussein’s fall, Col. Matthew Bogdanos put the Marines under his command on the job.

A first-generation Greek American with a master’s degree in classical history, Bogdanos appreciates cultures that value their history and preserve their antiquities. After seeing his work, the United States military put him in charge of recovering the stolen artifacts, and he was able to retrieve thousands of them.

Twelve years later, Bogdanos has watched helplessly as the Islamic State, also known as ISIS, has overrun Iraq and smashed the remnants of ancient cultures — from millennia-old temples to monasteries.

Recovering antiquities is still Bogdanos’ work: As an assistant district attorney in Manhattan, he tracks stolen artifacts from their origins in the Middle East and India, and seizes them when they’re shipped via smugglers and dealers to wealthy buyers in New York.

But with ISIS, he said, informants and industry knowledge won’t help. The only way to preserve antiquities is by destroying their destroyers.

“You shouldn’t use a hammer for every problem, but sometimes it’s the only tool that’s going to work,” he told JTA ahead of a visit to Israel this week. “Unless the U.S. decides to take direct action in Syria and Iraq, there’s nothing I can actively do.”

Bogdanos is in Israel to headline a conference sponsored by the City of David, a Jerusalem archaeological park. The conferences — called “ISIS: Is it possible to stop the destruction?” — aims to bring further attention to the crisis ISIS has caused in destroying antiquities, and conversely, to the value Israel places on its own.

Israel’s culture of treasuring antiquities, Bogdanos said, comes from a functioning police force and legal system. But beyond that, he credited a “great sense of ownership by the people” of their historical artifacts. He said Israel and Turkey are among the best countries when it comes to valuing antiquities.

“I don’t think it’s a coincidence that you tend to find less looting in countries that have greater democracy and greater access to the market, and a more open economy,” he said. “In countries where you have a brutal dictatorship, you have people who feel disenfranchised.”

Iraq and Syria exemplify disenfranchised societies right now, Bogdanos said. But he does see a silver lining to ISIS’ heinous acts. Antiquity theft happens every day, he said. Now, people are finally paying attention to it.

“It heightens to the world what’s going on every single day to a lesser degree,” Bogdanos said. “I’m leveraging the horror to say wake up!”

Time To Save Iraq’s Treasures — By Force, If Necessary