My Jewish Responsibility To Help Refugees 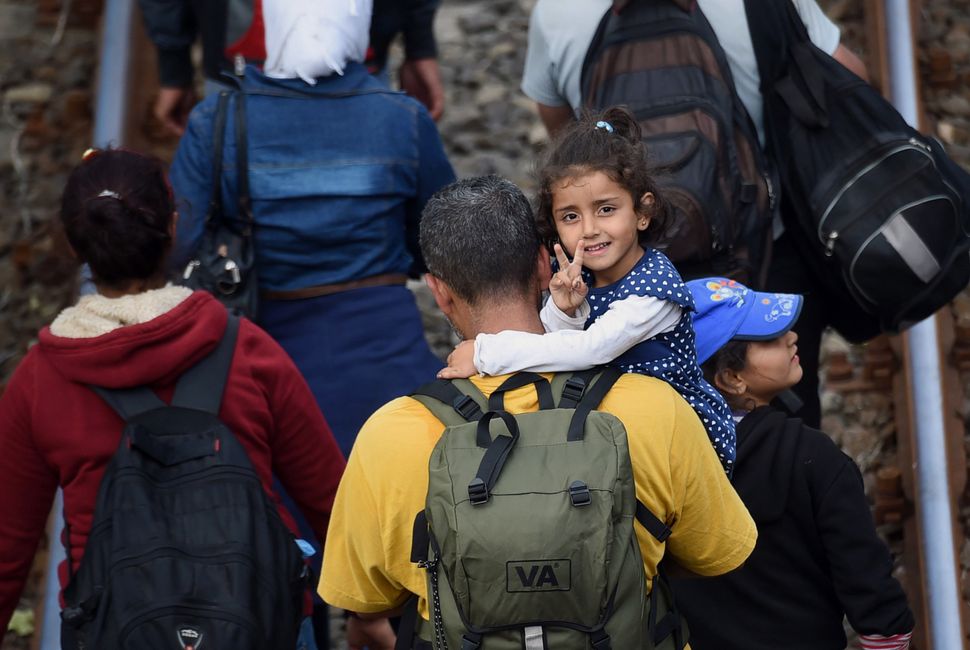 (JTA) — As our car rolled slowly toward Budapest, we saw a huge group heading in the opposite direction on the highway just outside the city: Hundreds of people quietly walking in the breakdown lane, marching toward freedom and peace.

I couldn’t tell if the other drivers were lifting their heads or not, but I couldn’t look away, paralyzed by a scene that reminded me of the stories my grandfather told me about his march from Budapest to the concentration camp at Mauthausen.

Barbed wire fences are again being built in Europe to stop the flow of refugees. Thousands of men, women and children drowned at sea on their way to Europe across the Mediterranean. In Budapest, refugees were led to trains they were promised would bring them to the West, but instead were taken to a so-called registration camp. In the Czech Republic, refugees had identification numbers written on their hands until the process was stopped amid a public outcry, the procedure too reminiscent of the tattooed numbers on concentration camp prisoners. And European political leaders, foremost among them Hungarian Prime Minister Viktor Orban, warn of the refugees overflowing Europe with their “different” cultures and religions.

These scenes from Europe in 2015 sound like echoes of the Holocaust. But Europe’s biggest humanitarian crisis since World War II makes many Europeans blind in their historical eye, which in turn provokes concern among European Jewish leaders. At a recent demonstration in Budapest against the inhumane handling of this crisis by the Hungarian government, anti-Semitic insults where shouted by right-wing counter-demonstrators. When a group of people is stigmatized and isolated in refugee camps and abused for the political purposes of right-wing parties, we are not far the the images of Auschwitz and Theresienstadt.

Recent events pose a challenges to the Jewish communities of Europe, so it is perhaps not surprising that many Jewish leaders and individuals are actively involved in providing aid to the refugees. Personally, when I see how people are fished out of trains on the basis of their racial profile, or locked up in camps behind barbed wire, or used as scapegoats to maintain political power, I’m on the one hand grateful for my own life, for my healthy child, warm home, and the love of family and friends.

But I also can’t sit at home and look away. As a journalist, I try to raise as much awareness as I can. And as a private person I try to extend a hand, helping the refugees find a peaceful moment in the railway stations or on the highway from Budapest and Vienna.

Since last month, when I joined the volunteers — many of them Jewish — helping refugees in Budapest, I’ve come to realize how many of them need someone to listen to them as much as they need the medicine, blankets and kosher (hence, also halal) food that we distribute among them. When you look into their eyes, their plight stops being a demographic issue.

I know they come from countries where anti-Semitism and terrorism are rampant. But the people determined to kill Jews, they don’t need this stream of refugees to infiltrate Europe. They were doing just fine before it started.

The refugees are mostly fleeing ISIS barbarism – our common enemy. If we Jews help them, our actions could build bridges to a more secure future. Maybe I’m being naive, but I need to be if I am to help make a bright future for my 6-year-old son.

Julia Kaldori is the editor of Wina, a monthly magazine serving the Viennese Jewish community. She was born in Hungary.

My Jewish Responsibility To Help Refugees