Boehner’s Successor Will Be Pro-Israel. Here’s Why Netanyahu Should Worry Anyway. 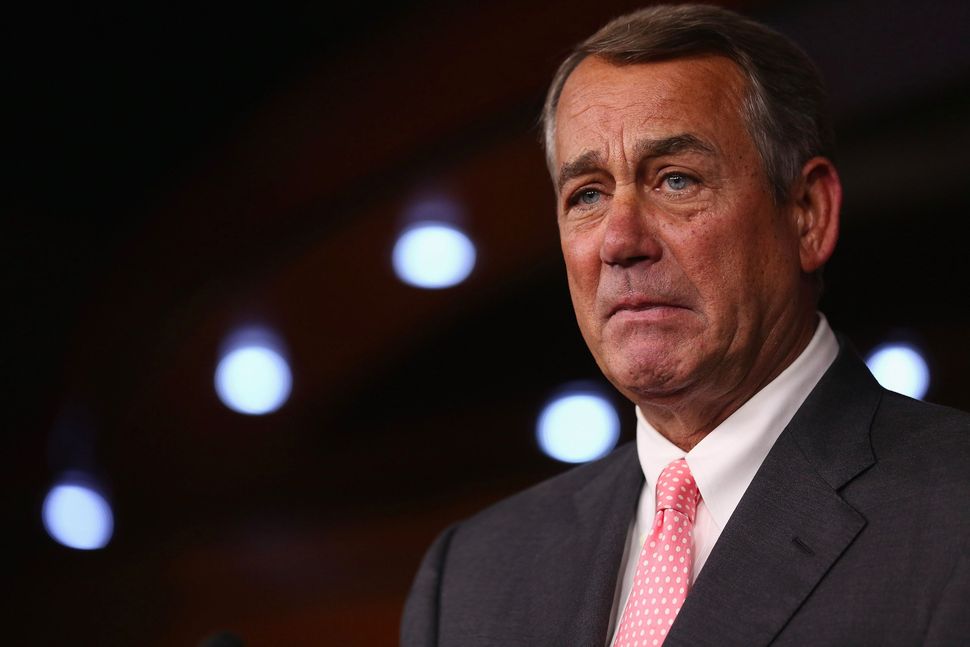 Here’s a sure bet: the next Speaker of the U.S. House of Representatives will be just as supportive of Israel, in general, and of Benjamin Netanyahu, in particular, as John Boehner ever was during his almost five years at the helm. In today’s Republican Party, unabashed backing for Israel and whatever policy it pursues is like an oath of allegiance, an ideological foundation no less than family values or resistance to tax hikes.

But the question of whether Boehner’s surprising resignation is good or bad for the Jews, at least those who currently manage Israel’s affairs, is far more complex. A bloody battle for succession could divide the party, push it further to the right and diminish its stature among the general public, potentially damaging its chances in the 2016 elections. Such an outcome, by all accounts, would displease Netanyahu, to say the least.

The general background to Boehner’s decision, as he himself outlined in his teary press conference in Washington this Friday, is his Sisyphean battle against the GOP’s militant radicals, who came to view him as a collaborator of the timid party establishment and as a weak opponent of the detested Obama administration. His resignation, no matter how spun, will be viewed as a victory for the opponents who had been out to depose him, as shown by the enthusiastic applause it received when Marco Rubio reported the news to participants in the ultra-conservative Values Voters Summit in Washington.

It was another show of the strength of the anti-establishment sentiment in GOP that has catapulted Donald Trump and others to the top of the party’s presidential race. Some observers contend that this part of the GOP is less committed to Israel’s defense and is perhaps less enamored with American Jews, a suspicion only bolstered by Trump supporter Ann Coulter’s infamous reference to “f…king Jews” following the GOP debate last week.

Boehner, who spearheaded Netanyahu’s controversial invitation to address Congress on the Iran deal in March, said Friday that he had already decided to resign last year but postponed his decision after Virginia’s Jewish Majority Leader at the time, Eric Cantor, was defeated in the GOP primaries by his Tea Party opponent, David Brat. Cantor missed his chance to succeed Boehner and become the first Jewish Speaker of the House but went on to work for a Wall Street investment firm instead. Nonetheless, as Taegan Goddard of Political Wire tweeted on Friday “Somewhere on K Street, Eric Cantor is weeping” and many American Jewish leaders are probably weeping with him.

California’s Kevin McCarthy, who succeeded Cantor as Majority Leader and was one of Kevin Spacey’s muses as he prepared to portray the conniving Frank Underwood in the television series House of Cards, is considered the leading candidate to replace Boehner. McCarthy also has strong pro-Israel credentials and the proper conservative bona fides but he may nonetheless be considered too moderate for the Tea Party inspired radicals of the Republican Conference in the House. Some of them are interested in burning down the house, as it were, and will make do with nothing less than complete capitulation to their demands.

It’s hard to tell how the resignation and ensuing confusion will influence the threat of a federal government shutdown next week, which some cited as one of the reasons for Boehner’s abrupt decision to resign. Boehner’s opponents insist on ramming through a federal budget that would defund Planned Parenthood, despite the certainty that such a bill would never get past the Senate. Perhaps Boehner has decided on a last minute Hail Mary confrontation with his Tea Party nemeses that would see him moving the budget forward despite their opposition.

Washington insiders were amazed at the fact that Boehner chose to resign straight on the heels of what was considered one of his crowning achievements: Pope Francis’ speech before a joint session of Congress on Thursday. Although Boehner denied any direct link between the Popes’ call for unity and collaboration and his own decision to resign, the timing of his decision could hardly be mere coincidence.

One way or another, Boehner’s drama clearly eclipsed the Pope’s speech before the UN General Assembly and clearly shifted the media’s attention away from the Pontiff and back to politics. There was some poetic justice in this, as the Pope’s own triumphant visit to New York, which once would have garnered far less attention, overshadowed the concurrent meeting in Washington between the leaders of China and the U.S., the world’s two great superpowers.

Boehner’s Successor Will Be Pro-Israel. Here’s Why Netanyahu Should Worry Anyway.