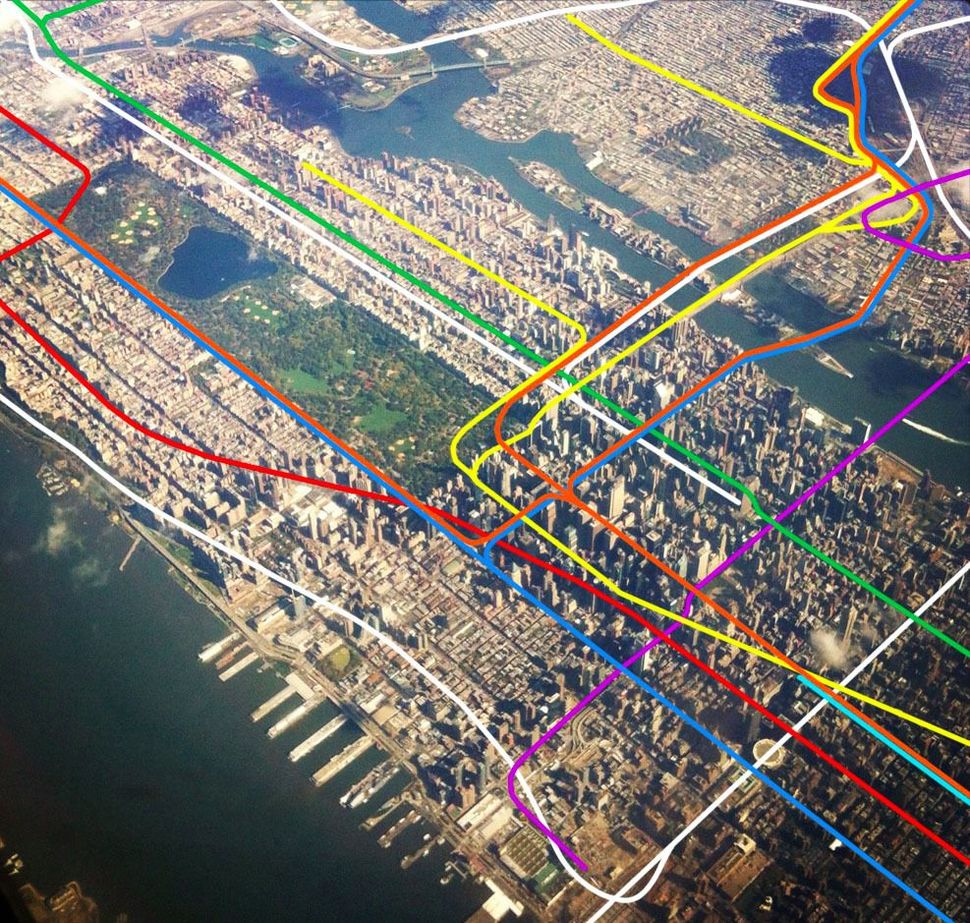 Normally, I tend to find the self-congratulatory literature of New York Jewry either tiresome or cliché. But as a bit of a transit nerd and, well, a New York Jew at the end of the day, I took some interest in this question. What is the most Jewish subway line? My first instinct was to say the D, which passes through several Haredi and Russian Jewish neighborhoods, the Lower East Side and the southern end of the Upper West Side. I could have left it at that.

Yet the question bugged me through the High Holidays: How does one measure the Jewishness of a subway line? Of course, the question is impossible to truly answer. The MTA does not collect data on the ethno-religious attachments of its passengers, and subway lines do not have demographic identifications anyway. But which subway line is the one that might have the most Jewish “character,” and how does one measure that with the data available?

I decided to develop an admittedly seat-of-the-pants, unscientific methodology: Which subway line serves the greatest number of Jewish population clusters, as defined in sociological literature?

For data to determine Jewish population clusters, I consulted the information provided in by the UJA-Federation of New York (results from which were also analyzed by Josh Nathan-Kazis for The Forward in 2013), which mapped the Jewish populations in various New York City neighborhoods. Detailed population information was provided for 21 clusters in the city of New York excluding Staten Island, which was left out since the Staten Island Railway is a separate system.

I elected to use this data despite the fact that, as on many Jewish censuses, non-Ashkenazim were undercounted: One counting methodology the JCRC uses is to look for “typical” — that is, Ashkenazi — Jewish surnames. (How Ashkenormative.) I also elected not to use U.S. Census data, which, like many censuses, chronically undercounts Haredim. But my choice of data was somewhat incomplete due to the fact that a significant portion of New York City Jews — though not the majority — live outside the clustered areas, which themselves were fuzzy.

From there, I added up the number of Jews, as defined by the reports, served by each subway line. Stations on the border of two neighborhoods, like 59th Street-Columbus Circle, were counted in both neighborhoods. Rush hour-only service was included. Admittedly many New Yorkers cross borders to take a subway, but this is the closest approximation with the data available.

Here are the results: New York’s five most Jewish subway lines, as defined by service to Jews in major population clusters, are: the F, the D, the B, the N, and the Q.

No surprise: All of these lines have major components in Brooklyn, which is by far the largest concentration of Jews in the United States and the largest concentration of Haredim and Orthodox Jews as well. The F and the D both serve the two largest clusters of Jews in New York: Borough Park and Flatbush/Midwood. The F also hits the many non-Ashkenazi communities concentrated in Queens, and the famed communities of the Upper East Side at one station there. In fact, the lines that do not have service in Brooklyn — the 1, 6, 7 and E — all have much lower Jewish ridership than average.

This quick calculation took me by surprise. Having lived in the Jewish clusters of the Upper West Side and Washington Heights, I was shocked to find that neither the 1 nor the A were ranked. But then I realized that the clusters that I take to be definitive are, in fact, quite small compared to those in Brooklyn. This made me realize how isolated different Jewish clusters are from each other in New York. We think we know about the clusters other than our own, but do we really?

If I can get my hands on more detailed and precise data, I would very much like to do a more scientific analysis of which subway lines might see most frequent Jewish usage. But I would also like to take a deeper look at Jewish transport habits. Some of this desire stems from minor practicalities: Where are the places most accessible for different kinds of interdenominational and other Jewish events? There may be a bigger practical element too: Which stations, for example, would be most likely to require Yiddish-language information for Hasidic communities in which many people have limited English proficiency? And sometimes it’s fun: Which line serves the most kosher restaurants? What is the most practical place for a frum traveler to be?

Yet another part of this desire is to go beyond “What is the most Jewish train?” to ask, “How do Jewish people move around this city, incomparable in the diaspora for its Jewish character?”