French Jews Need To Stand Up for Muslims Right Now 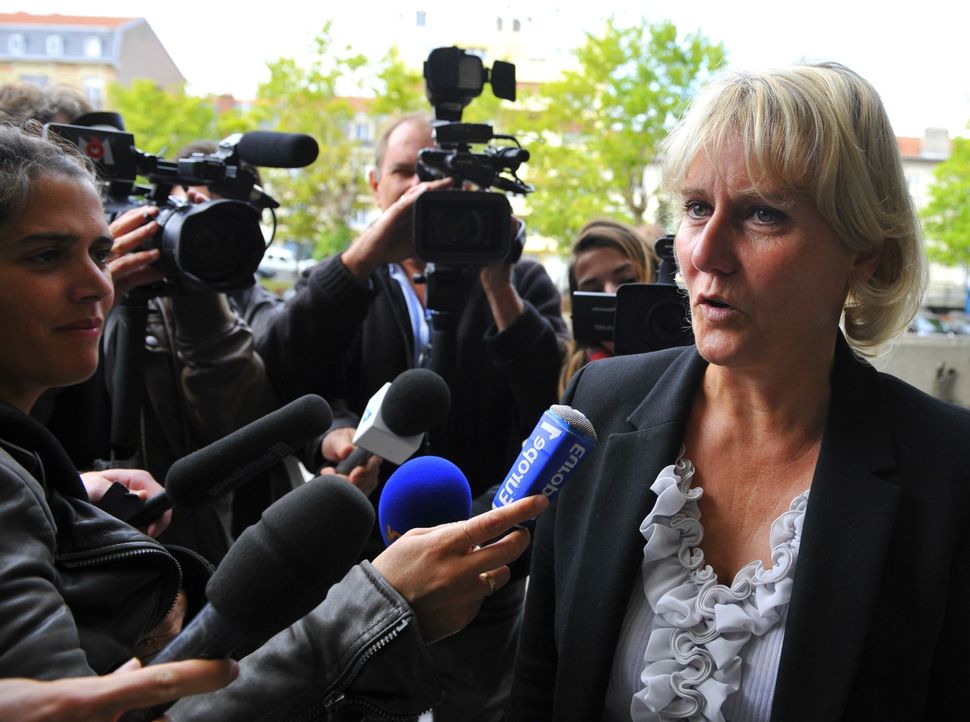 France discovered recently that Marine Le Pen, leader of the extreme right-wing Front National, has a kindred spirit. Her name is Nadine Morano.

Like Le Pen, Morano is an immigrant-baiting and blunt-talking politician. A leading figure of the conservative Les Républicains, Morano is very close to the party’s leader, the once (and so he hopes) future president, Nicolas Sarkozy. Like the stale odor of a Gauloise cigarette, Morano trails behind her a long history of choice remarks on immigration in France, including comparing refugees to invaders and warning that they are “submerging” the nation.

But all this changed, and changed dramatically, on September 26, when she was the guest on the popular news show “On N’est Pas Couché.” In the give and take on the subject of the refugee crisis, Morano announced not only that France’s roots were Judeo-Christian, but also that it was a “country of the white race, one where foreigners are welcomed.” To the general stupor of her interviewers and audience, she then doubled down on her claim: “I want France to remain French. I don’t want to see France become Muslim.”

It is beyond dispute that Christianity has deeply marked France. But as the historian of religion Henri Tincq drily noted, it doesn’t take a historian of religion to know this is not Morano’s point. Instead, her point is that Muslims have no business being in France. Tincq might have added that it does take a history degree to know that, all too often in France’s past, the emphasis on the country’s Christian roots has served as a reminder that the Jews had no place there, either.

Fortunately, France remained recognizably French in the political firestorm sparked by the interview. In the National Assembly the following day, Ericka Bareigts, a black representative from the island of La Réunion, rose to speak. “The France described by Madame Morano,” she declared, “is not mine.” Prime Minister Manuel Valls — himself a naturalized French citizen — followed with a fiery speech. Flanked by his government’s ministers, several of whom are offspring of North African immigrants, Valls turned toward Bareigts: “Yes, Madame, Marianne [France’s symbol of liberty] has neither race nor color, and you incarnate her today.”

Bareigts’ address spurred standing ovations from the ranks of the left — a heartening but also predictable response. Less predictable, given the divide between socialists and conservatives in France, was that several representatives of Les Républicains also applauded her remarks. In fact, there was an explosion of dismay and denunciation among conservatives immediately after Morano’s declarations. Nathalie Kosciusko-Morizet, Sarkozy’s second-in-command, asserted that France does not “operate on the ideological basis of apartheid,” while another conservative leader, Jean-Christophe Lagarde, affirmed that if Morano wants to run in December’s regional elections, she should do so as “spokesperson for the Ku Klux Klan.”

In light of the general dismay and disgust, Morano’s days as an L.R. candidate seemed numbered. In the days that followed the interview, when Morano reaffirmed her original remarks, Sarkozy seemed ready to sanction his close friend and replace her come the December elections. But will his readiness be translated into action? While furious in private over Morano’s declarations, Sarkozy has said little in public, apart from bland exhortations that his party’s members “watch their words.” (Belatedly, the L.R. announced that Morano, having refused to apologize for her declaration, would not be allowed to run in the December elections.)

If Sarkozy is furious, it is because Morano has placed him in an impossible position — impossible, that is, if one’s politics are full of calculation and empty of morals. He realizes that sanctioning his onetime apprentice will entail a heavy cost. Not only does Morano still have many supporters among the rank and file, but she is a thorn that will cause Sarkozy more pain if he removes her from his side rather than just leaving her there. As a reminder of this fact, Morano publicly threatened to “dézinguer” Sarkozy, to slam him, if he runs for president in 2017.

More important, though, is what Morano isn’t saying but is certainly thinking. By the time the presidential campaign rolls around, she may well have quit the L.R. and joined the Front National. Morano would not be the first to take this path. Ever since Marine Le Pen launched the “de-demonization” of her father’s movement, the line between the F.N. and the L.R. has grown as thin as a slice of prosciutto. Le Pen’s eviction of neo-Nazis and anti-Semites from the party, as well as her decision to ostracize her father Jean-Marie Le Pen, has provided the moral cover for several L.R. members to slip over to the dark side while pretending to remain attached to the Republican ideals.

While the L.R. leadership continues to insist there is no common ground between their values and those embodied by Le Pen’s party, that same ground has been moving rightward under their feet. It is a disturbing and dangerous shift, moreover, for which they are largely responsible. It is not an accident that, according to a recent poll, 60% of respondents believe that the majority of the L.R. leadership now shares “positions close to those of the F.N.” How could this not be the case when Sarkozy has built his career on poaching in the territory of the extreme right, stealing their rhetoric on the subjects of immigration and integration? From his failed effort, when president, to create a “ministry of national identity,” to recent claims that there are “too many immigrants in France” and that Marine Le Pen’s leadership of the F.N. was “compatible with the Republic,” Sarkozy has, in effect, created the problem now embodied by Morano.

In fact, Morano is Sarkozy’s Frankenstein monster. She has gone further than he has dared, saying outright that Muslims have no place in France. One observer, Ahcène Taleb, has made an astute point about Morano’s declaration. Rather than insisting that Christian roots or white skin defines French identity, Morano instead defines that identity against Islam. To be French means one cannot be Muslim. As Taleb concludes, this is, in effect, a “call for discrimination against Muslims.”

Such calls should set off fire alarms among French Jews, but there has been only a tweet or two. The day after Morano’s interview, the Representative Council of Jewish Institutions in France (CRIF) noted on Twitter, “Stupidity does not have a color.” The organization has since been silent on the subject.

But the French have not. A Paris-Match poll taken on October 3 suggests there is reason, if not to hope, at least not to despair. According to the magazine, only 16% of the French “have a good opinion” of Morano. Sarkozy might well consider asking Vladmir Putin to replace her, since another recent poll in the Journal du Dimanche revealed that even the Russian president, disliked by more than 70% of the French, seems to be more popular than Nadine Morano.

French Jews Need To Stand Up for Muslims Right Now