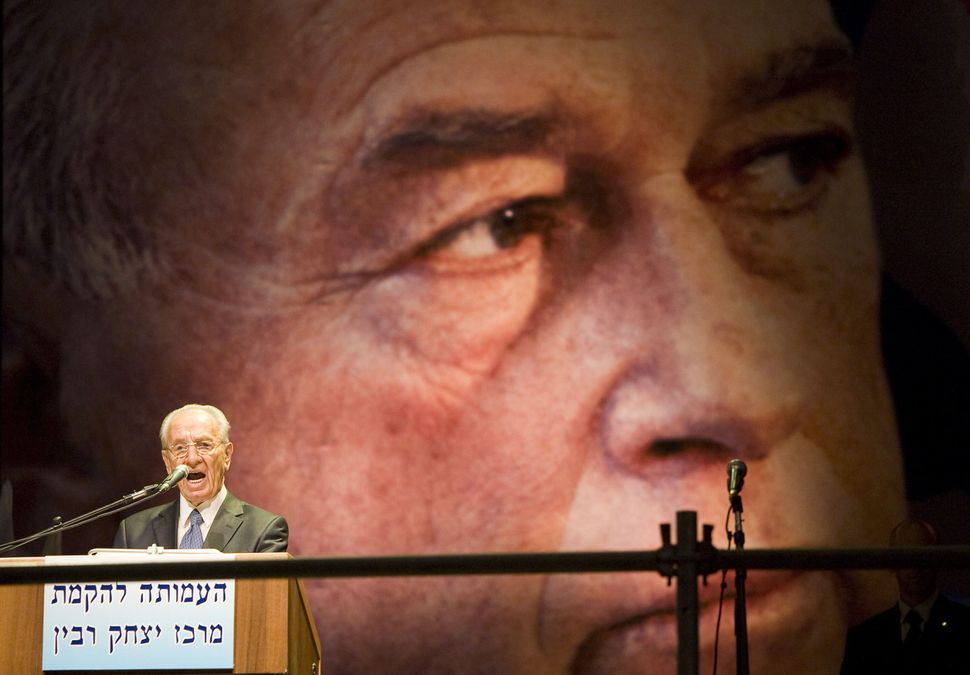 It has been 20 years since the assassination of Israeli Prime Minister Yitzhak Rabin. The assassination was easily one of the most significant moments in Israel’s brief history, and arguably in Jewish history altogether. Why has there been so little talk of it — and so limited a commemoration — in the Jewish public square?

I learned of the murder when I was 18 years old, as I rode a bus back from Ra’anana to Jerusalem after a weekend spent with dozens of other kids under the auspices of the Religious Zionist youth movement, Bnei Akiva. Strangely enough, that Shabbat we had read the Torah portion Lech Lecha. Genesis 12 marks the first promise of land to the Jewish people, a promise which, translated from opportunity to idolatry, led to the tragedy of biblical proportions that came to pass that Saturday night.

Of all the chaos and confusion of that memorable bus ride, one incident stands out. A few kids on the bus — Americans in Israel, with strong opinions about the Jewish state’s political situation but little understanding or empathy for its people — cheered and celebrated the news that Rabin had been shot. The climate was so toxic; I suppose it was reasonable for them to believe such news would have been welcome in the country.

Here we are now 20 years on. While we learned from the assassination about the existence of fundamentalism in our midst, and while those kids on the bus (hopefully) learned that such treasonous violence is not to be celebrated, not much else has changed.

Jewish militant fundamentalism is as strong and self-confident today as it has been since the end of the Bar Kochba revolt. And though its outbursts of violence still remain largely isolated incidents, and though we know collectively to condemn and mourn those incidents, the assassination of Rabin did virtually nothing to damage — much less dismantle — the ideologies that would give birth to such behavior.

The first problem with remembering the assassination is that, if it was a cautionary tale, it has not been sufficiently heeded.

The second challenge is Rabin’s complicated political legacy. Today the Oslo process — in many respects his defining political accomplishment — is somewhere between dormant and dead, repudiated first by the actions of all parties for the duration of the 22 years since its signing, and now officially jettisoned by Palestinian Authority President Mahmoud Abbas in his recent U.N. speech. How would Lincoln be remembered if, in 1885, the North and the South were still engaged in open military hostilities?

But the biggest obstacle to Rabin’s memory is that many Jews very reasonably have little appetite right now for the self-flagellation involved with a commemoration of Rabin. As Israel’s citizens are under attack, many of the country’s supporters feel that Israel’s primary enemies are from without and not from within. They argue that empathy with a society under attack dictates solidarity with the people rather than the bitter surfacing of a memory that signaled that society’s failure. If remembering Rabin is about signaling that we can be our own worst enemies, I am not sure that message can be heard today.

Rabin’s legacy, in other words, is hijacked both by the complicated political reality he left behind, and by the dominant lesson of his death as a warning about Jew-on-Jew violence. His memory is being lost because it is seen as arising at an inconvenient time, or because it is thought to be a failure.

I think this is a mistake, and that Rabin’s memory is in urgent need of retrieval — for our sake, as much as his.

I see Rabin’s primary legacy in the character of his leadership, in his relentless pursuit of a revision of the status quo (in spite of his own personal reservations about the very process in which he was engaged), and in the belief that such a process was ultimately vital to Israel’s long-term safety, security and stability. Rabin — in deed, if not in temperament — was heroically hopeful. In retrospect, he occupied a place very few Israeli politicians have been able to inhabit — a place located between Shimon Peres’ ultimately unrealistic utopian universalism and much of the cynical pragmatism that has characterized the Israeli political leadership of the right for the last generation.

It is hard to know whether the Oslo process that constituted the substance of Rabin’s pursuit would have been successful or similarly derailed had he not been killed. Powerful political forces were amassing against him at the time, and a brutal campaign of suicide terror was frightening the people and destabilizing the prospect of change. An unresolved political process in the rapidly unfolding course of history cannot be the single measure of a man.

But if we take the perspective of Rabin as seeker, Rabin’s leadership emerges as Zionism fully articulated: He embodied the sober and somber effort to realize a future that was rooted in moral imagination. Rabin presided over a country being victimized without allowing victimhood to define his visionary platform.

Zionist politics should be, at their best, almost messianic (whether they are religious or secular), reflecting a longing for realities in the future that present conditions do not allow. Too many politicians seem so hopelessly constrained by what is not possible that they forget the imaginative dimension of leadership.

There is an oft-cited statistic that 70% of Israelis support a two-state solution, and 70% of Israelis believe it is not possible to get there. This may be both true and still totally not enough. Moral imagination, the Zionism that got us here, requires us to not halt our own progress toward building the Israel we want by focusing on the obstacles in our way, even if they are significant; moral imagination demands that we locate a third statistic, one that is at least constructive if not optimistic, that tells us what percentage of our own actions might create the possibility for long-term change even in the most harrowing short-term moments.

Moral leadership is about pursuits and not always outcomes; it is defined by what it seeks and not by the climate of hostility that stands in its way. As Israel cannot be cleanly defined by its own political successes and failures — after all, there are other parties to the conflicts in which Israel has been perpetually mired — the legacy of Yitzhak Rabin will not lie in the peace that never came or in the assassin whose spiritual descendants are frighteningly strong. It will lie in the emergence of religious and political leaders — some of whom we have today, and of whom we need more — who route their politics of progress through a climate of risk without minimizing it or glorifying it, and who continue to envision a better future with both sincerity and pragmatism. Rabin’s memory should lead the way.

Yehuda Kurtzer is the President of The Shalom Hartman Institute of North America.