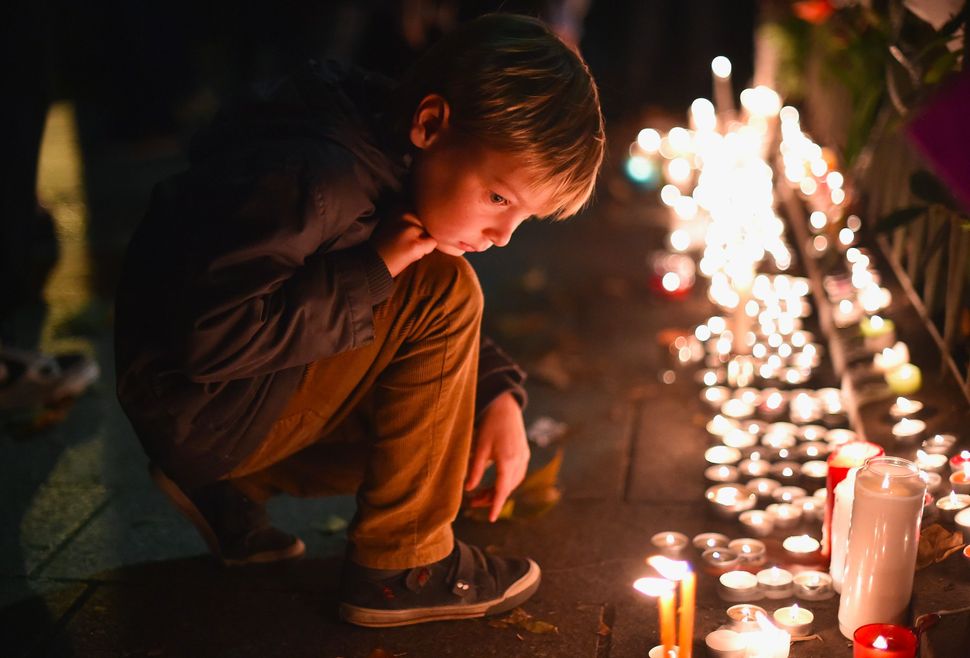 Less like many others, I suspect, I was especially keen on connecting a particular set of dots — dots that, I confess, were Jewish.

Le Carillon, the corner bar in the 10th arrondissement swept by gunfire; Le Petit Cambodge, the small restaurant across the street; Le Bataclan, the concert hall turned into a slaughterhouse; the Boulevard Voltaire, echoing to bursts of gunfire; even the Stade de France, the soccer stadium that nearly turned into an inferno. In all of these half dozen public spaces and buildings that had come under attack, I assumed that there must be a Jewish connection.

What, I wondered, was Jewish about these places? Was it the owners or the clientele? Or, instead, was it their proximity to Jewish institutions, or their association with the Jewish community in Paris?

It turns out I was wrong. I spent the weekend trying to connect dots where dots mostly did not exist. Yes, Le Bataclan turns out to have Jewish associations: Previous owners were Jewish and the theater has been a frequent venue for Israeli and Jewish performers. As for the other sites, not so much.

Days after the bloodbath, there is still no evidence that the Islamist terrorists singled out French Jewry. Based on , President François Hollande and French foreign policy were singled out. So, too, were “les croisés,” or Christians.

And the Jews? Well, rather than connecting one set of Jewish dots, I instead connect a very different set, but one peculiar to, well, Jews. We had come to expect that, like many events in the past, this tragic event would turn out to be all about us. About anti-Semitism, or anti-Zionism, or both. Instead, it turned out to be about most of humankind. Jews, not to mention French Jews, were not alone.

This, of course, did not leave me with a sense of relief — how could it? Instead, I was left with a kind of grim reassurance: So many of us now constitute targets that the fanatics will not be able to succeed.

Looking beyond what the murderers said to what they did, it is clear that yet others were also singled out on Friday night. Concertgoers. Soccer fans. Wine and coffee drinkers. Lovers and friends. Young and old, white and dark-skinned. In a word, a microcosm of France was singled out.

The 10th arrondissement is known as Boboland: a gentrifying neighborhood where dozens of different ethnic groups live and work together. Above it runs an elevated Metro line with stops like Colonel Fabien, Jaurès and Louis Blanc, reminding us of a France that resisted the forces of tyranny and persisted in believing that 1789 belonged to all of us. Across it runs the Canal Saint Martin, which was partly paved over after being used as a barricade by revolutionaries in 1848. Over it presides the Gare du Nord, built during the imperial reign of Napoleon III, but now serving as a principal hub for European train travel.

Walter Benjamin, who spent his final years as a German Jewish exile in Paris, described the city as the capital of the 19th century. By this, Benjamin meant that Paris was ground zero for many of the century’s most thrilling — but also some of its most chilling — cultural and architectural, political and ideological movements. It may well be that, for similar reasons, Paris will also become the capital of the 21st century. It is a city governed by a Socialist mayor in a nation that will soon veer sharply to the right. It is the capital of a nation that played a leading role in the building of the European Union, which an increasing number of its citizens now regret as a mistake. It is home to Europe’s largest Jewish and Muslim populations as well as for Europe’s most powerful extreme right-wing party, the Front National.

And twice now this year, it has served as the bloodied stage for a murderous ideology specific to our own century. It is against this background that I keep thinking of those who died this weekend. At first, I thought they were innocents who were guilty of being in the wrong place at the wrong time. But, no, that is not the case. These people were in the right place at the right time. Our century will show that it is the Islamist terrorists who are in the wrong place and wrong time.