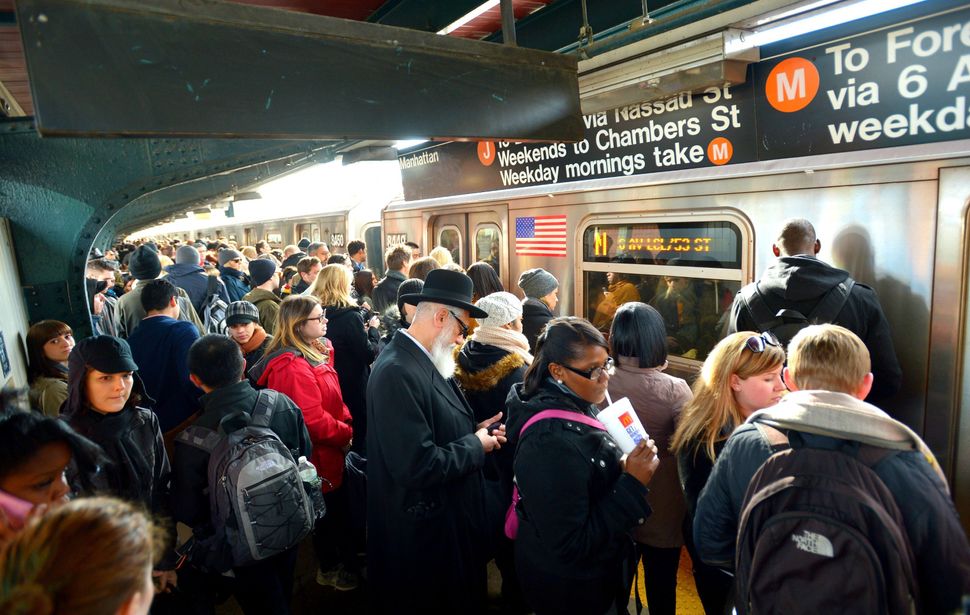 I confess that I was taken aback by the popularity of my last piece for the Forward, In that article, I used some seat-of-the-pants social science and mapping to figure out which line of the New York City Subway served the greatest number of Jews — which turned out to be the “F.” I had written a piece in a whim of nerdiness and out of a desire to explore the, well, more absurd questions of Jewish life. In response, I got to meet with a geographer, saw my article on several non-Jewish New York City blogs, and received a slew of messages from old classmates who had found the piece and wondered if I was the author. I even heard two people talking about it on one of the less “Jewish” subway lines — the “E.”

One thing fueling this popularity was a certain flavor of critique — that I had missed out on some subset or other that defined a more appropriate “Jewishness.” For example, many were surprised that the “1” — which goes through the Upper West Side, Washington Heights and Riverdale — was not the top line. (As one otherwise excited friend told me, the “1” is “so Jew-y!”) Others were incredulous about the “realness” of the Jews that, say, the “F” serves. Some seemed to be annoyed that I had not found subway patterns reflecting a more “authentic” Jewish population — a population that more closely tracked their ideas of what “Jewish” meant.

I noticed suspicious absences in this “authentic” Jewish population that my critics liked to talk about: Where were the Haredim? The Russian-speakers? The non-Ashkenazim? I mean, we all know that people bubble themselves into their communities, and the Jewish world is no exception. But I noticed that some of the critique seemed to want to mathematic out — over such a silly, frivolous thing — one or another community in New York that did not meet a specific “mould.” They seemed to forget that the Haredim, the Russian-speakers, those who are not Ashkenazi — they are all real Jews. This damaging trend maps out onto larger ones — be they the stereotyping of crude Russians, the internalized anti-Semitism often masked as legitimate criticism of Haredi communities, or the erasure of Sephardi and Mizrahi heritages.

Are these communities threatening? Or is it really just that their very existence undoes that “typical Jewish New Yorker” — the non- or mildly-observant, Ashkenazi, English-speaking Manhattanite? Because the typical Jewish New Yorker is as likely to be a Haredi toddler in payos, a Russian-American eating shchi, or a Bukharan Jew on the “F” train from Queens to Midtown. And let’s not forget that the Manhattanite I just mentioned might not think of himself or herself as typical at all.

The Jewish subway study was an earthquake to the way I thought of the New York Jewish world. I knew already that the largely secular Russian-speaking community, or the Haredi world, or the communities in Queens, were all much larger than my Conservative/Conservadox bubble, though that bubble comes much closer to what many Forward readers may think of as “typically Jewish.” Yet mapping out the statistics and looking at a New York that I barely interface with on a subway line I rarely ride drove the point home in a new way: How much am I really a “typical Jewish New Yorker”? Does that label really mean anything at all? It certainly does not mean what I thought it might mean.

Some do not want that image of the bagel-munching Upper West Sider undone — it would require a lot of uncomfortable thought, and perhaps engagement with Jews who do not “Jew” in the same way. But I do not think we have the luxury in 2015 to wallow in the Jewish identity we think is correct. How do we stop wallowing? A silly, nerdy question may be just the thing to kickstart the process of rethinking our identity.

At the end of the day, the young Haredi bochur in Borough Park, the Russian-speaking grandfather in Brighton Beach, and the Bukharan toddler in Rego Park are in the same bizarre and trippy diaspora that we, the bagel-eaters of the Upper West Side, Washington Heights, and Park Slope lovingly call our own. So any sort of identity as a Jewish New Yorker really should include those realities. After all, it’s about Jewish New York. If you cannot confront that reality, then, well, should you speak for it?

Jonathan Paul Katz lives and works in New York City. The views here are in no way connected to his place of employment.