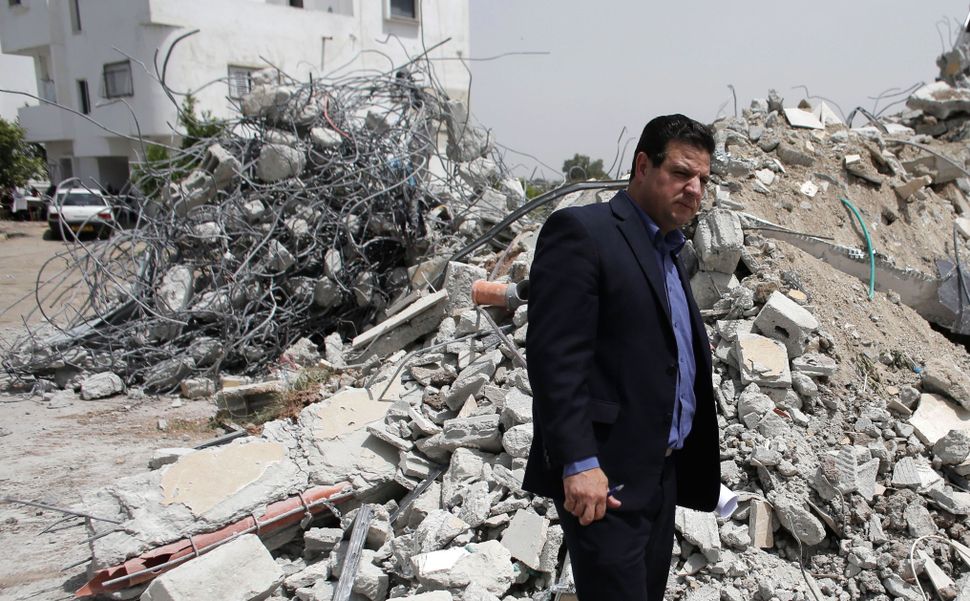 Arab Israeli MK and Joint List leader Ayman Odeh’s decision not to meet with the Conference of Presidents this week in New York — because the meeting was to be held in Jewish Agency offices — was the right move.

As Odeh , “I came here to represent the Arab public in Israel to American audiences. As their representative, I cannot in good conscience participate in meetings in the offices of organizations whose work displaces Arab citizens, just as in the Knesset, we do not participate in the Ministry of Defense, the Foreign Ministry, and the Ministry of Aliyah and Immigrant Absorption.”

Ten days after Odeh was elected leader of the third-largest party in the country last March, his first act as a Knesset member was leading a four-day march through Israel’s south to call attention to the needs of the neglected, impoverished and officially “unrecognized” Bedouin villages of the Negev, where about 100,000 Palestinian citizens live. His decision not to enter a New York office owned by an Israeli quasi-governmental organization that has — since its founding and to this day — promoted Jewish-only immigration and worked with the government and bodies like the Jewish National Fund to ensure contiguous Jewish-only territory throughout Israel is an act that sincerely and coherently reflects his positions and politics.

It also contains a lesson for the American Jewish establishment, which puts too much focus on open dialogue about Israel, and not enough on taking resolute action in the face of fundamental violations of its declared values.

Odeh was slammed not only by Malcolm Hoenlein, the hawkish vice president and de facto chairman of the Conference of Presidents who has been at its helm, with no challengers, since 1986, but also by the liberal director of the Union of Reform Judaism Rabbi Rick Jacobs. “His decision doesn’t support the important cause of dialogue to promote equality and coexistence in Israel,” the rabbi said in a statement. Jacobs also noted that he was “pleased and proud” that the Conference invited Odeh, as if the umbrella group of 52 American Jewish organizations should be patted on the back for agreeing to meet with a Knesset member who represents 20% of the Israeli population, just because he challenges Israel’s body politic.

But Hoenlein and Jacobs got it all wrong. Odeh’s decision is in fact the embodiment of the cause of equality and coexistence in Israel. His refusal to cooperate with the Jewish Agency is a direct challenge to Israeli policies that champion Jews as an ethnic group over non-Jewish citizens — or, put another way, that put the country’s Jewish demographic before its democratic, civil character — or, in yet other words, that bolster inequality.

As Odeh said in New York at the HaaretzQ conference Sunday, “As a Palestinian, I cannot accept that there will be a world without a place for Palestinians to shape their own future. As an Israeli citizen, I know that Israel cannot be a just and true democracy so long as it occupies another people. As an Arab citizen of Israel struggling for political, civil and social rights, I see how these problems are chained to one another.”

Mainstream American Jewish leaders from across the spectrum like Hoenlein and Jacobs speak a lot about the importance of open debate and values like tolerance and equality, but the Conference has never, for example, invited to a meeting members of the Israeli anti-occupation group Breaking the Silence or American Jewish activists who support the boycott of settlements. The Conference won’t even accept J Street into its fold, an organization that promotes a two-state solution, has never come out against Israel’s military operations and rejects any form of boycott.

The censure of Odeh is therefore not only disingenuous, but also misguided and unfortunate. Instead of coming out against him, they could learn from him that being a community leader is not just about fostering open dialogue and tolerance — sometimes, it’s about knowing when not to tolerate something or someone. Knowing when to take a stand, as Odeh did.

At this point in the game when it comes to Israel, with nearly 50 years of military occupation and 67 years of systematic discrimination against Palestinian citizens and no end in sight, it can no longer be just about hearing all the voices in the room. Open dialogue and freedom of speech are crucial for education and raising awareness, but that is only half of it. The other half is knowing when to cut certain voices out and when to take action.

If American Jewish leaders were serious about equality and tolerance in Israel, they would have agreed to meet with Ayman Odeh anywhere else. At the same time, they would refuse to meet with some of the top brass of Israel’s current leadership, who openly engage in inequality and intolerance by perpetuating the Israeli occupation and by promoting legislation that penalizes the Palestinians as a national minority.

Mairav Zonszein is an independent journalist, writer and translator based in Israel. She blogs at 972mag.com