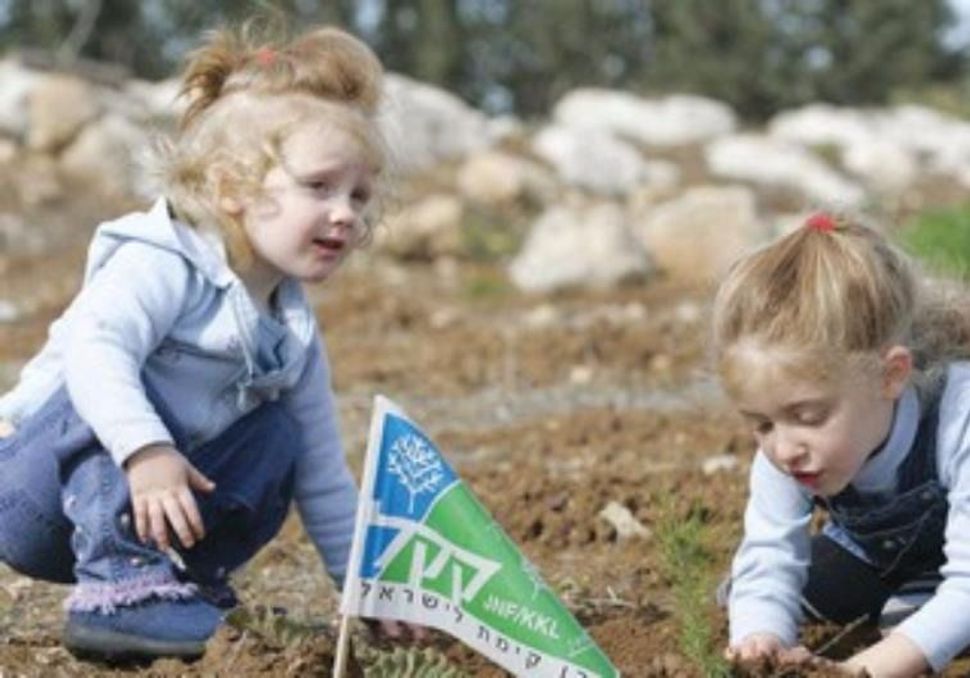 Ask any American Jew what the Jewish National Fund does, and they will most likely answer, “It plants trees in Israel.”

But the reality is much more complicated. Even a close reading of JNF-USA’s tax forms and website does not reveal how much of the $100 million dollars American Jews donate each year flows to the settlements, which have created facts on the ground that impede a two-state solution.

JNF, famous for “making the desert bloom,” did indeed play a major role in creating agricultural sustainability in the early days of the State of Israel. It continues to plant trees and to support crucial environmental sustainability projects such as water desalinization, as well as economic development in low-income sectors. Many of these projects deserve our support.

But JNF projects that expand or bolster West Bank settlements do not. Such initiatives hamper the creation of a Palestinian State, elevate the rights and privileges of Israeli settlers over Palestinians living in the West Bank and harbor those yeshivot whose marginal teachings inspire graduates to carry out daily attacks against Palestinians — including this summer’s arson attack on Duma that killed an 18-month-old baby and his father.

Last year, Israeli journalist Raviv Drucker documented how JNF-KKL (the Israeli organization) committed millions of dollars to support settlement projects. These included infrastructure for a new neighborhood in Ariel, a yeshiva in Beit El, and a visitors’ center in Gush Etzion that is ground zero for pro-settlement propaganda. How much of this money comes from U.S. tax exempt donations? JNF-USA isn’t saying.

The most recent available tax filings list close to $20 million dollars in grants for “general support” to unspecified projects in the Middle East. The website focuses on a few environmental and community development initiatives in the Negev and, in the “north and the south.”

But when T’ruah supporters around the country wrote to JNF-USA to ask how much of our U.S. donor money goes to settlements, the organization responded with a letter that further muddies the issue.

This response asserts, “Contrary to T’ruah’s allegations, JNF is not involved in any settlement building and never has been.” But the letter continues: “KKL-JNF has deep roots in Gush Etzion… The few projects that JNF-USA supports include the new museum and visitor center at Gush Etzion, the Three Boys Promenade (in memory of the three young men killed last summer), and various parks and the maintenance thereof.”

Which is it? Does JNF have no investment in the settlements, or are they using U.S. donor money to build parks beyond the Green Line that divides Israel proper from the occupied territories?

There are hints of course. Last week, a New Jersey synagogue hosted a JNF fundraiser for projects in Gush Etzion. Commenting this fall on a video produced by T’ruah, JNF-USA CEO Russell Robinson told Haaretz reporter Debra Nussbaum Cohen, “we only do projects within consensus areas of Israel, like Ma’alei Adumim, Ariel and Gush Etzion.” This reference to certain settlements as “consensus areas of Israel” belies the fact that one side cannot declare a “consensus.” Until there’s a peace agreement, everything over the Green Line remains under military control.

Bizarrely, JNF doesn’t even seem sure what the Green Line is. The letters they sent out claim, “The Green Line is named such because of the millions of trees KKL-JNF planted there over the decades before Israel’s founding and the millions we’ve planted across the country since.” In fact, the Green Line refers to the 1949 armistice line, so named after the color of the ink used to draw it. The areas over the Green Line, captured in 1967, have not been annexed by Israel (with the exception of the Golan Heights and East Jerusalem, which have) and — even according to Israeli law — do not have the same legal status as the area inside the Green Line. Perhaps this rejection of the political demarcation explains why the famous JNF Blue Box leaves out the Green Line altogether.

When I met with Russell Robinson, the head of JNF-USA in August, I requested a list of their current and past projects. Despite JNF’s claim that they “met with [T’ruah’s] director and shared everything,” I have yet to see such a list.

In a few cases JNF-USA funnels money to U.S. “Friends of” organizations, which it is legally obliged to identify on its tax forms. We therefore know about a grants to the yeshiva based in the controversial settlement in Hebron and to Artists 4 Israel. The latter’s work includes a Facebook page that advocated for transferring Palestinians to Jordan, and a mural in Hebron calling for the rebuilding of the Jewish Temple where the Al Aqsa mosque now stands.

When our dollar bills disappear into the JNF pushke — or, of course, into the coffers of any organization directing money to Israel — we need to know that this money is going toward building peace, not obstructing it. Moses himself teaches us the importance of transparency. According to a midrash (rabbinic teaching), after the construction of the mishkan (tabernacle), a few troublemakers were suspicious that Moses might have skimmed a few materials off the top. In response, Moses offered a full and public accounting of every donation. Nothing was missing.

If Moses can be transparent with the Jewish people’s money, so should the organization that bills itself as “Your Voice in Israel.”

Rabbi Jill Jacobs is the Executive Director of T’ruah: The Rabbinic Call for Human Rights, which mobilizes a network of 1800 North American rabbis and cantors and their communities to protect and advance human rights in North America, Israel, and the occupied Palestinian territories.