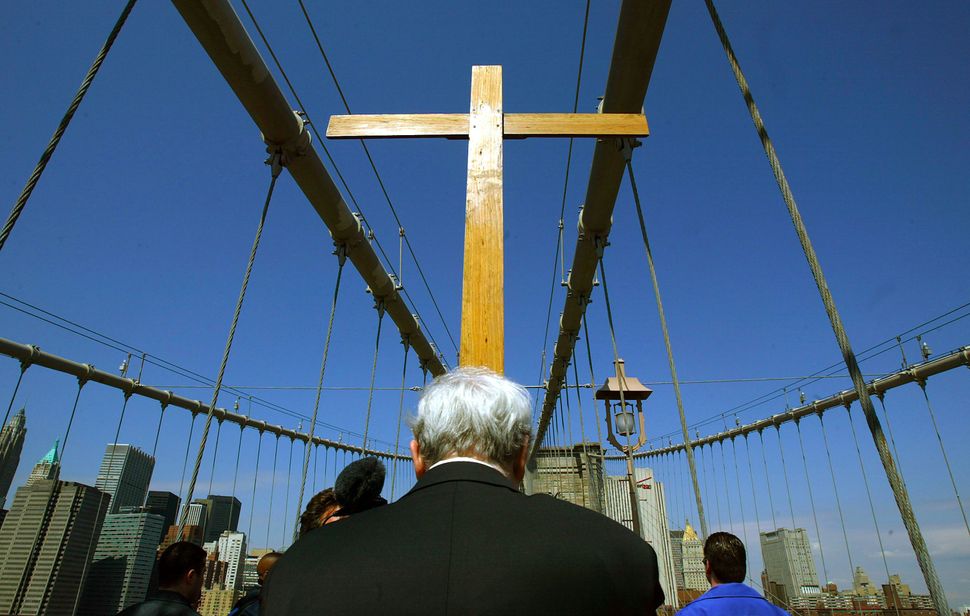 It’s hard to overstate the importance of the new document on the conversion of Jews that the Vatican released December 10. Especially when you consider that most of the reporting on it is wrong.

According to most headlines, the Vatican announced that “Catholics should not try to convert Jews.” That’s not what actually happened. What the document says is that the Catholic Church rejects “specific institutional mission work” (my emphasis) aimed at Jews. Individual Christians, on the other hand, are still encouraged — “called,” as the document puts it — to reach out and preach or “bear witness to their faith in Jesus Christ also to Jews.”

Still, you can see why the “no conversion” headlines would get people excited. For Jews, it means that the 2,000-year scourge of persecution and forced conversion is finally over. Not that this has been a major issue for the past four or five centuries, but still. Jews have long memories.

It’s an even bigger deal for missionary groups like Jews for Jesus. Converting Jews is what they do. If this thing spreads, it could put them out of business. Protestants don’t always admit it, but Vatican thinking has a trickle-down influence beyond Catholics. What happens in Rome doesn’t stay in Rome. That’s why the executive director of Jews for Jesus, David Brickner, is so outraged over the new document. He said in a public statement that the Vatican was “merely pandering to some leaders in the Jewish community.”

Another Jewish-born missionizer, Sid Roth of “It’s Supernatural!” radio, was even harsher. He said the new Vatican document was “playing right into the devil’s plan,” since converting the Jews is the prerequisite to “the return of Jesus” and “worldwide revival.” The devil doesn’t want that.

The notion that Catholics shouldn’t try converting Jews isn’t the only thing news reports got wrong about the new Vatican declaration. For one thing, it’s still not settled doctrine. The new document explicitly says it’s offering not a “doctrinal teaching of the Catholic Church,” but rather a “reflection” on “current theological questions.”

The correct statement — that the Catholic Church no longer favors institutional missionizing — isn’t really new. It’s been evolving within the Catholic Church for a half-century. Pope John Paul II came close to spelling it out in a 1980 speech to the Jewish community in the German city of Mainz. He said God’s covenant with the Jews “was never revoked by God.” That in turn was a refinement of a little-noticed but crucial statement in the Vatican’s 1965 declaration on Christian-Jewish relations, “Nostra Aetate.”

The new document is titled “The Gifts and the Calling of God Are Irrevocable.” It was issued by the Pontifical Commission on Religious Relations With the Jews, a department in the Vatican bureaucracy that oversees an ongoing religious dialogue with Judaism and the Jewish people. Catholic-Jewish dialogue was one of the mandates adopted in 1965 by the international bishops’ convention known as the Second Vatican Council, or Vatican II.

Vatican II is probably best remembered for adopting “Nostra Aetate,” the declaration that annulled the charge of God-killing against the Jewish people. “Nostra Aetate” also reaffirmed the fact, which Catholics had largely disregarded for centuries, that Christianity grew out of Judaism and that Jesus’ teachings were rooted in his own people’s heritage.

“Nostra Aetate” also said, in one of its less-noticed passages, that God “does not repent of the gifts He makes or of the calls He issues.” That’s a New Testament quote from Romans 11:29. In plain English, it means God hasn’t revoked the “everlasting” promise given to Abraham in Genesis 17:7, guaranteeing blessing and redemption for his descendants. Some say it also includes the covenant of the law given to Moses at Sinai.

Catholicism and other Christian sects taught for centuries that the “New Covenant” proclaimed by Jesus, offering salvation through Jesus to those who believe in him, had replaced the old Jewish covenant offering redemption through Torah. Scholars call this “replacement theology,” or supersessionism, meaning the New Covenant superseded the old.

“Nostra Aetate” annulled supersessionism. The Jews’ covenant was still in force. The Christians’ New Covenant hadn’t replaced it. The two existed side by side. This is called dual-covenant theology. And since the Jews’ covenant was still alive, then so was their promise of blessing and redemption. The implication, many Catholics believe, is that Jews, unlike other non-Christians, can end up in heaven without believing in Jesus.

In the decades since John Paul II’s Mainz homily, that implication has been stated explicitly by growing numbers of Catholic scholars. In 2002 it was adopted by a group of Catholic clerics convened by the U.S. Conference of Catholic Bishops, in a document called “Reflections on Covenant and Mission.” But the bishops’ conference itself didn’t formally embrace the reflections.

The “gifts and calling” passage in “Nostra Aetate” touched off a Christian debate that is well beyond Catholicism and is still going strong. Mainline and liberal Protestant churches, including Methodists, Presbyterians, Episcopalians and Lutherans, have largely adopted dual-covenant theology, mostly within the past decade. Statements by the and United Methodist churches frankly acknowledge that the Catholics’ “Nostra Aetate” opened the door. Both of those churches have formally sworn off missionizing Jews.

On the other hand, conservative and traditionalist Protestants, including most evangelicals, flatly reject the idea that the Jews’ covenant survives and their faith should be respected. John Hagee, the Texas pastor who heads Christians United for Israel, denied in a 2006 Jerusalem Post interview that he’d adopted dual-covenant theology. He did say, though, that he’d “made it a practice not to target Jews for conversion” at his pro-Israel events.

The Southern Baptist Convention, the largest Protestant denomination in America, has repeatedly voted by huge majorities to reject proposals that it give up missionizing Jews. Some conservatives, including some conservative Catholics, call dual-covenant theology “heresy.”

The fact is, the Vatican itself has difficulty explaining how it can reconcile its belief in the continuing Jewish covenant, which seems clear in the Romans passage, with the equally clear principle appearing elsewhere in the New Testament that salvation comes only through Jesus. The new document puts it this way: “That Jews are participants in God’s salvation is unquestionable, but how that can be possible without confessing Christ explicitly, is and remains an unfathomable divine mystery.”

Given all the uncertainty, does the new document matter at all? Yes, it does, for two reasons. First, it adds new pressure on the Vatican to adopt the no-conversion principle formally. That will influence other Christians. Jewish religious life will become easier in many parts of the world.

Second, as a formal statement from the Vatican, however tentative, it makes news. That means Jews hear about it. That’s important. Most Jews probably heard about Vatican II annulling the deicide charge, but few have heard about all the other reforms in Catholic teaching since 1965. Jewish leaders and institutions have done shamefully little to tell folks in the pews about them. Church officials occasionally complain that Jewish kids aren’t taught anything about Catholicism except the Spanish Inquisition.

Sometimes things do get better. There’s no shame in admitting it.