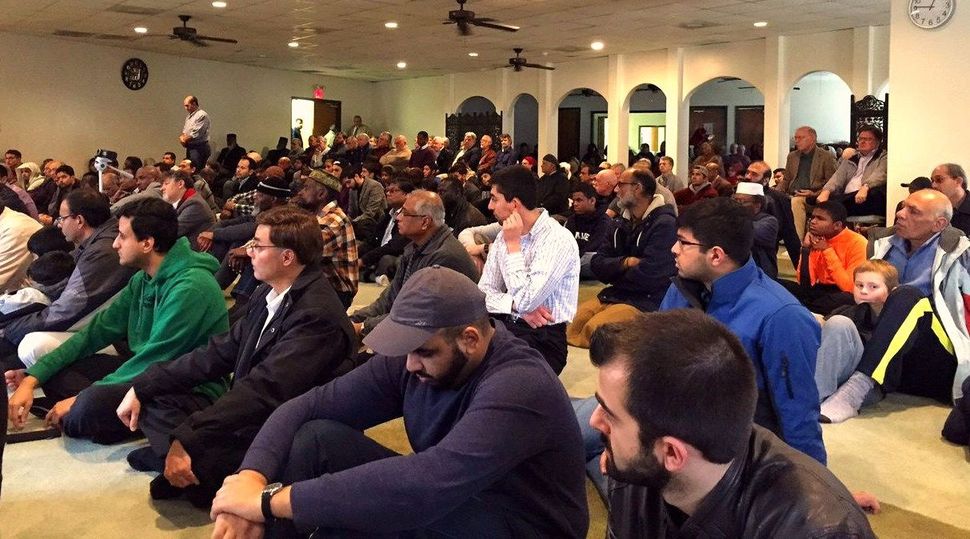 The interfaith community of Huntsville, Alabama, has put the “heart” back in the “Heart of Dixie.”

For months, we’d listened as our state leaders railed against Muslims in general and Syrian refugees in particular. It was a local attitude as well. We saw an increase in anti-Muslim rhetoric on social media and local talk radio. It was time to present a competing narrative: one of faith, justice and love.

Together with the Huntsville Islamic Center, I organized a “Day of Solidarity” on December 18 — and was overwhelmed when hundreds of people responded. Christians, Jews, Buddhists, Wiccans and others stood (and kneeled) in solidarity with our Muslim brothers and sisters. We joined together for mid-day prayers at the Huntsville Islamic Center, and after the prayers ended, many people approached me with gratitude and shared their stories. “We aren’t extremists,” they emphasized. “We shop at Target, go to the movies and volunteer in the community.”

There is no one magical antidote to the virus of bigotry. There is only education in the face of ignorance, developing a sense of openness in the face of narrow-minded behaviors and action, and learning to be present with one another during all of life’s tragedies and opportunities.

This was just such a moment, and Imam Ragab Abdelmoneim touched on our common humanity in his sermon. He described a call to his mother in Egypt to complain about how his children were causing him pain, an experience that taught him greater compassion for his own parents. As a mother of three young children, I was powerfully reminded that I too recently had that same feeling and had that same conversation with my own mother.

As I prostrated on the floor and heard the sounds of prayer in Arabic, I felt powerfully reminded that we are all simply servants. We all pray to one God, just as we were united and prayed together as a body of diverse individuals. I imagine that to an outsider to the Jewish religion, to pray in Hebrew must feel just as foreign as praying in Arabic felt to me. Yet I know that prayer goes beyond any language. Prayer comes from our hearts reaching out toward God as we strive to feel more connected.

Our two faith communities plan to build on this connection. Establishing it wasn’t easy; our interfaith service was a group effort and the culmination of years of relationship-building. With this success, we stand on the shoulders of my predecessor, Rabbi Jeffery Ballon, who worked tirelessly to form strong bonds. Our interfaith community as a whole is a powerful vehicle for civil rights, civic engagement and dialogue.

But no relationship is without conflict. Harsh words have been exchanged about Israel’s military involvement, the intifada and support for BDS. Yet the desire to overcome those obstacles is what keeps a relationship together. It’s easy to dismiss someone as “the other” if you haven’t sat and talked together, shared painful stories and, yes, argued passionately. During my six years in Huntsville, we’ve done all that and more.

And just look at the result. In Alabama, the Huntsville Islamic Center invited a female rabbi and three Christian ministers (one female) to pray with them and speak after the prayers ended. It was a huge step for this community to allow me to speak in their masjid during their Friday prayers — and it was something that will remain in the hearts and minds of everyone who prayed together that day. People may not remember the exact words we said, but they will remember the feeling of togetherness the moment created.

Afterwards, we were applauded and inundated with thanks and requests to pose for photos. It was quite a paparazzi moment after such a solemn event.

Everyone left feeling energized and hopeful of what can be tomorrow. “It is not your responsibility to finish the work of perfecting the world, but you are not free to desist from it either,” Rabbi Tarfon says in Pirkei Avot. We are obligated to continue to reach out, to keep trying and to know that where there’s a will, there’s a way. I pray that Jews and Muslims in other communities will join together as we did.