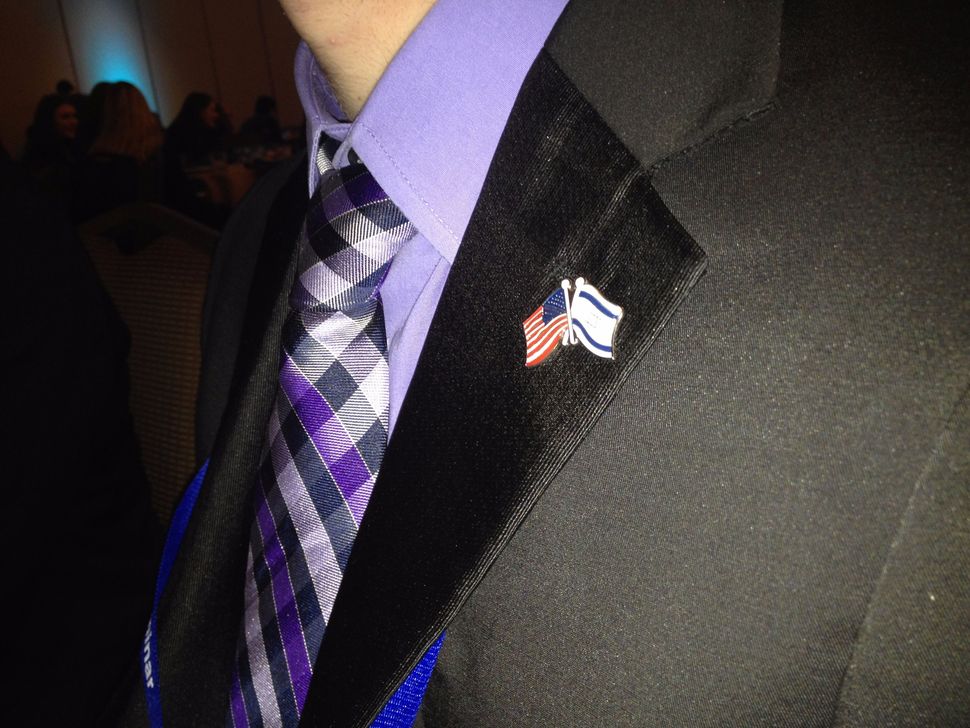 I am never surprised by the dress code. I am always the most scruffily-dressed in the hall.

Though this time I scraped home with that accolade against tough competition. There was another Israeli in the place. Promoting the works of a publisher, also lacking a suit, he shared with me his concerns about the Zionist credentials of the President of Israel. Word has it that Ruvi Rivlin was willing to appear on a platform without an Israeli flag, so as not to offend the Haaretz/NIF Conference’s Palestinian guests. It was enough that the President had agreed to appear there in the first place. But to agree to the removal of the flag? Beyond the pale, as far as he was concerned.

By contrast, my young AIPAC interlocutors would never remove the American flag from their hearts. They know what Patriotism means. They love America and are proud of America, while feeling free to share their misgivings with their country, as well. Indeed it was this very freedom they were happy to celebrate.

For them, perhaps like many of the folks that I have spoken to in this intense period, America is an idea. And to be American is first and foremost to buy into the idea. The idea of Liberty. In this sense, for them, questions of liberty and questions of Peoplehood tend to merge one into the other. To be American is to be free. To be free is to be American. Anything that limits freedom is un-American.

My AIPAC kids were united in their praise of freedom and/as the American way. From the young orthodox Jewish woman from New Jersey who lamented the lack of gun control, to well-kept blond chap from Montana who proudly owns two rifles, they all loved their country as the font of much good. American supremacy was rarely questioned, but was also a source of concern. “Sometimes people get really arrogant and think in a really narrow fashion. I do believe that we have the best way of life, but that doesn’t mean we don’t have a lot to learn from other countries.” “I don’t think that’s the problem. I think the problem is that because America has such power, and has such a strong message for the world, it can turn us into a target…”

So here’s the issue. At Makom we suggest that Jewish Peoplehood, in order for it to be robust and sustainable, needs to be made up of three components: The Covenantal, The Communitarian, and the Cosmopolitan. Those traditions and founding texts that we have inherited and that we apply in our lives (Covenantal), our commitments to our extended family and solidarity with Jews around the world – whoever they may be (Communitarian), and our values and ideas as they play out in the world beyond the Jewish community (Cosmopolitan).

So all the American folks I’ve met on my journey have been extremely familiar with collective commitments to shared ideas such as freedom. (Even when “freedom” sometimes chafes at the idea of collectivity, it is still seen as more of a connector between Americans than not.) Many Americans are also comfortable with the idea of traditions. Their instinctive disgust or discomfort with Donald Trump’s announcements about Muslims emerged from the near-sanctity of the immigrant tradition.

But what of solidarity for solidarity’s sake? What of my commitment to others simply because they are part of my extended family? That key aspect of Jewish Peoplehood, which values “looking after our own” – where does that come into play in the American Jewish psyche? Although Adam Sandler’s does seem to celebrate the “tribe”, he only celebrates the good guys, the ones to whose ideas and values we can relate.

Israeli band The Backyard brutally pushes the challenge in our faces with their song “One of Our Own”. The driving beat forces us to question the moral value of automatic pride in the tribe. What if “One of our own pulled the trigger… is still in jail”? Is a bad Jew as worthy of my care as a good Jew? Is an Israel full of “bad” Jews still a valid call on my commitments?

At AIPAC this question is beyond their remit. They may say that “Israel must be allowed to make its own democratically-reached decisions, and we must work to enable it to do so.” But for those outside of the organisation, who might feel that these democratically-reached decisions are problematic – even anti-Freedom! – how can they maintain their connection without some serious cognitive dissonance?