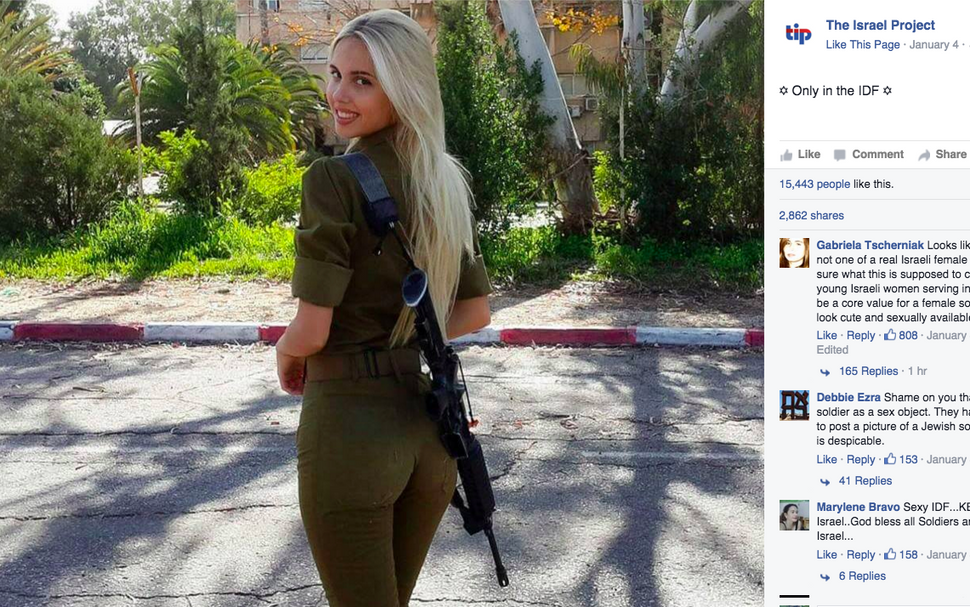 I am not a fan of The Israel Project (TIP) for the simple reason that it suffers from the same delusion that plagues FOX News: the one where you claim to be a “,” but do all you can to misdirect any criticism that might challenge your prejudices and lead to real, lasting dialogue. In 2009, TIP sent out pamphlets to supporters in which they recommended countering criticism of the settlements by changing the subject and saying that stopping settlement is “a racist idea” or “a kind of ethnic cleansing.”

Since 2009, TIP’s leadership has gotten a bit softer. Maybe that’s why I was a bit surprised to find that TIP’s gaze has become patently male — a turn illustrated by a sexist post on their Facebook page last Monday. The post, accompanied by a caption “✡ Only in the IDF ✡,” features the buxom buttocks of a young woman, ostensibly on duty as an Israeli soldier. The camera catches her from behind, so as to better let her skin-tight trousers show off her curvaceous figure as she gazes back over her shoulder with inviting eyes, blond hair let down and cascading alongside her rifle.

While I concede that, strategically, sex sells (the post garnered over 15,000 “likes”), this particular development in TIP’s social media strategy is surprising. Not only because of its sexist gaze, but because, as Ben Murane pointed out over at Jewschool, all three of TIP’s founders — Jennifer Laszlo Mizrahi, Sheryl Schwartz and Margo Volftsun — are women. (Note, though, that Mizrahi left the organization years ago, Schwartz is no longer on the board and Volftsun is not involved in day-to-day social media.) 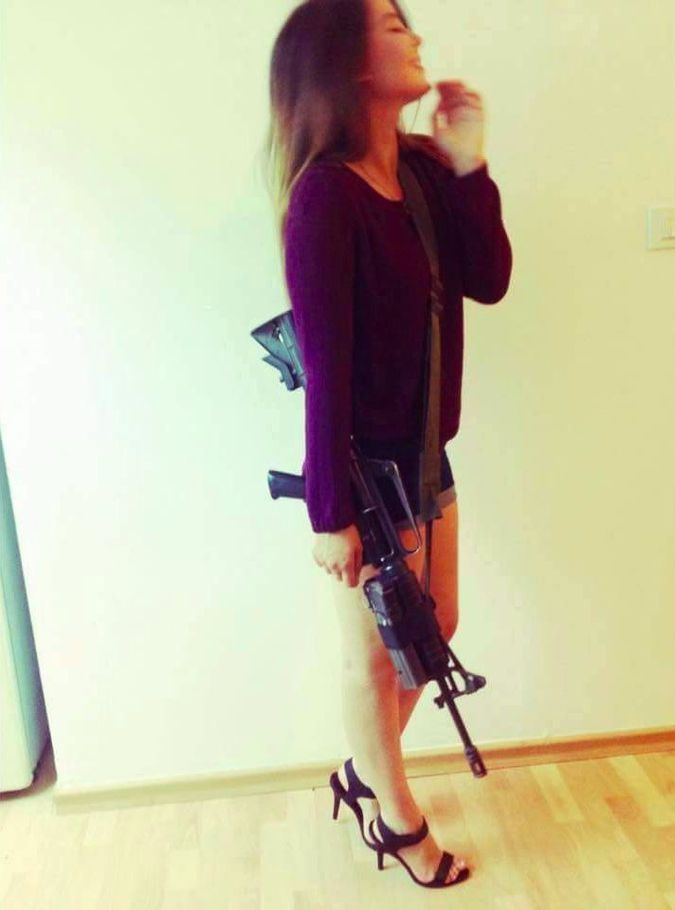 Image by Tumblr / The Israel Project

Because I don’t know who took the photo or if they were in any way involved with TIP, I can only fault TIP for using it. And, judging from several months of posts, the photo most definitely veers away from the way they usually present soldiers. Their style is more Humans of New York — pictures of brothers and sisters, cousins and triplets serving together — than “soft core porn,” as one commenter labeled TIP’s post. And while Israeli soldiers, given their age and health, are generally fit and attractive, this post and a few others on TIP’s tumblr are odd for the way they show men as heroic, but woman as objects.

What makes the photo posted last Monday by far the most troublesome is the extent to which it’s staged so as to deliberately fit this double standard. I mean, look at those pants! Our young solider would have had to spend more than a pretty penny at a tailor shop to pull a pair of baggy fatigues back to Lululemon proportions. People do that sort of thing, it’s true, but the angle, the lighting, and the letting down of the hair (uniform violation!), just feels slimy.

TIP’s apparent attempt at backtracking against criticism only makes things worse. Wading through a week’s worth of fear-mongering Facebook posts, I found that, a few days later, they posted a photo of a young man with the same “✡ Only in the IDF ✡” caption. This time, we see a young man pulling up his shirt and pulling down his shorts to reveal tattoos of a Star of David and a map of greater Israel. This young American immigrant to Israel seems to be more gregarious and creepy than sexy. This image also garnered complaints: “Glad you are a proud Israeli, but this is not a Jewish way of showing pride. Tattoos are forbidden.”

Of course, selling Israel with sex is nothing new. It has been going on since the 1950s and 60s. Hell, “Mad Men” did an episode where even Don Draper’s pitch for an Israeli tourism campaign isn’t sexy and objectifying enough for his clients. More recently, there have been tourism campaigns like the infamous “ThinkIsrael” ads aimed at UK audiences and last year’s MKTL pin-up calendar…you get the idea. 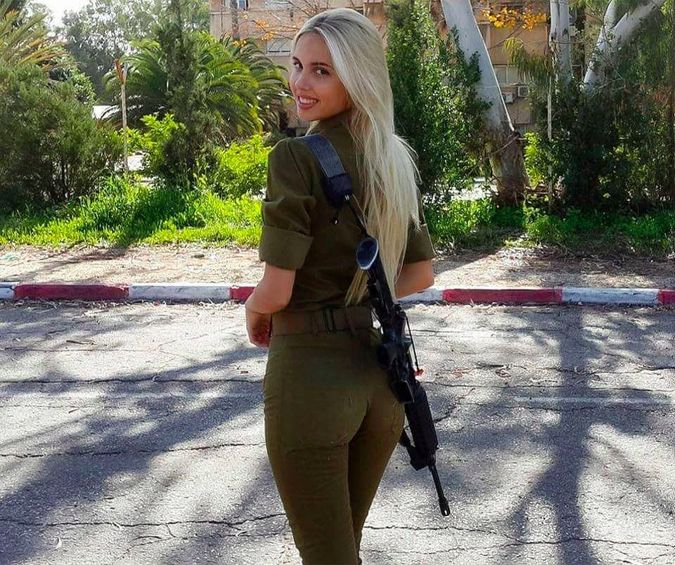 But selling Israel with sex has become a strategy that many groups are doubling down on. TIP’s little slip-up here falls neatly in line with other blindly pro-Israel ad campaigns like the one that was devised by the ad agency Seiden for ReThink Israel, one of Sheldon Adelson’s pet projects. The avowed mission? To appeal to “stuff 18- to 24-year-olds care about. Like surfing, beer, hotties, style, music and changing the world. Except they’re all — that’s right — in Israel.”

Hotties! That’s right. There is no way to get around being seen as sexist in this case. As suggested by the imagery used in Seiden’s video, “hotties” is without a doubt code for “girls gone wild.”

Even though TIP’s photo may be a slip-up from, say, a new social media intern, I think it’s more a revelation of the subconscious of TIP’s hasbara. It insults, excludes and changes the subject, just like TIP used to recommend in their pamphlets.