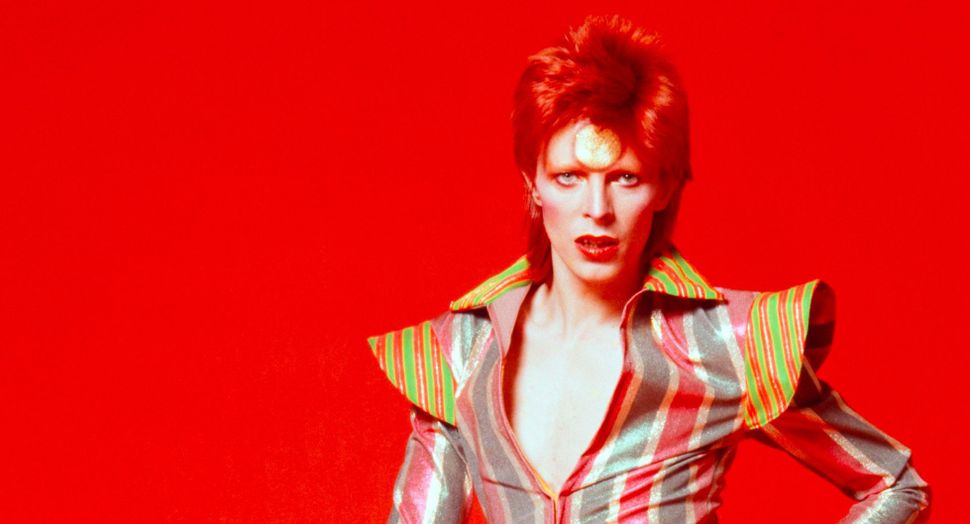 Like many Jewish kids, and many more gay kids, I grew up not belonging. I was a nerd and a weirdo. What other kids seemed to know intuitively — how to dress, how to talk — I had to puzzle out somehow, often unsuccessfully. That included sex; I didn’t know I was gay, and the romantic relationships I pursued with girls were as studied and artificial as everything else.

Before the Internet, it was harder to connect with other misfits. Nowadays, you can find any kind of freakishness, deviance and peculiarity on your smartphone. But in the 1980s, I only had scraps.

By that time, David Bowie had morphed into the polished pop star of his greatest commercial hits like “Let’s Dance.” But I had heard that he had once been someone else. As in Todd Haynes’ masterful fictionalization of Bowie’s life, “Velvet Goldmine,” these past incarnations seemed to be different people entirely: Ziggy Stardust, Aladdin Sane, the androgynous alien with orange hair and makeup.

Like many gay young men, I was inspired, and terrified, by Bowie’s gender-bending. That he wasn’t, in fact, gay made it all the more alluring: Here was someone neither gay nor straight, neither masculine nor feminine. Justin Vivian Bond, a brilliant, transgender, category-defying musical artist, put it perfectly on Facebook today: “Bowie was the first outspoken and shameless sexual libertine in the rarified pop culture strata. He was the embodiment of glamour, talent and a new kind of personal expression. Bowie inspired countless people to take personal risks, which led them to their own forms of self-actualization.”

And as a young Jewish man, I was entranced not just by Bowie’s seeming outsider-ness (a quality that is becoming less and less salient for American Jews) but by his literacy. Like Bob Dylan and Leonard Cohen, but without the recognition they enjoyed for it, Bowie wrote lyrics that were challenging, opaque and complex. We were focused on the looks, the music, the attitude — but underneath all that was a literary, artistic sensibility. Bowie was a fanboy; he read and listened and learned from the best.

Bowie the alien, Bowie the gender-bender, Bowie the artist — and, of course, Bowie the chameleon. David Jones was not just one misfit, he was a series of misfits whose life seemed to rail against the possibility of “fitting.”

In fact, the permutations of Bowie are even more eclectic than we know. For example, throughout most of the 2000s, when he was not making music, Bowie donned another form of drag: that of doting father, the sort who attended PTA meetings at his daughter’s school in lower Manhattan. He had already become a fixture in certain arts scenes, and had cultivated a second career as an actor.

Probably there are even more changes, more turns to face the strange, that no one knows about. Oddly, one of my first exposures to Bowie’s music was a collection of pre-“Space Oddity” rarities called “Love You Till Tuesday,” with songs recorded when Bowie was a Donovan-like singer/songwriter with vaguely witchy affectations. (Mark Bolan of T-Rex was another glam-rock star who began this way.)

And yet that same human being also pioneered what are now called “Bowie bonds,” asset-backed securities that enable artists to securitize future (including post-death) earnings from their work. The next time you hear “Suffragette City” on the radio, David Bowie already profited from it, because of this innovative financial instrument.

To me, these aspects of Bowie’s personality are intertwined. Styling himself an outsider — playing an actual space alien in “The Man Who Fell to Earth,” singing about outer space from his earliest hits to his last album, “Blackstar” — Bowie set himself up to be a series of outsiders. He could endlessly shape-shift among identities because he saw through all of them. “It’s all drag,” as RuPaul once said.

In a much more humble and obscure way, I’ve tried to live similarly. I’ve had careers as a lawyer, meditation teacher, writer, nonprofit founder/director, professor, rabbi, dot-com entrepreneur, journalist and LGBT activist. I’ve played at CBGB with my band, led Kabbalat Shabbat at Burning Man, meditated on silent retreat for three months in Nepal, danced at Bar Yochai’s tomb on Lag B’Omer, taught wilderness skills at Camp Ramah, proposed marriage in front of fifty people, and cared for family members through illness and death. At times in my Jewish life, I’ve identified as Orthodox, Conservative, Reconstructionist, Renewal and Non-denominational. It’s just how I am: an “intellectual drag queen,” as one of my friends once said.

Of course, David Bowie was a genius, and I am not, which is why he touched the lives of millions of people while my audience, to quote Spinal Tap, is more select. But that doesn’t mean I can’t have outsized role models with lightning bolts painted on their faces.

For all us dilettantes, polymaths, seekers and outsiders, Bowie set the standard. And we need heroes like him (even if just for one day) because, let’s face it, society often is suspicious of people like us. Maybe we look like drifters, or seem unreliable or unsteady. Maybe they have a point. Free spirits are rarely paragons of stability and, of course, human society needs both its adventurers and its guardians of hearth and home.

But I’ve always admired those whose lives are journeys rather than destinations. I think of Biblical forbears like Joseph — favorite son, bratty brother, outcast, slave, prisoner, prophet, advisor, ruler, ancestor. Or David: shepherd, beautiful boy, musician, warrior, lover, king. Or Ruth, who is willing to relinquish all she knows for love.

I’m not sure this life of phases, stages and periods is one I’ve consciously chosen, or if it’s a matter of chance, or maybe nature or nurture. Maybe, like Jessica Rabbit, I’m just drawn this way. I certainly can’t claim the level of agency that Bowie clearly demonstrated in incarnation after incarnation.

But since it is the life I have, I’m grateful to David Bowie for showing how it can be done. Before I even knew what I wanted to say, he had said it; Bowie saw through the masks I couldn’t wear, and in donning and removing them with such frequency, revealed them all to be only masks. As he wrote in 1971 about Bob Dylan, “You gave your heart to every bedsit room/ At least a picture on my wall/ And you sat behind a million pairs of eyes/ And told them how they saw.”