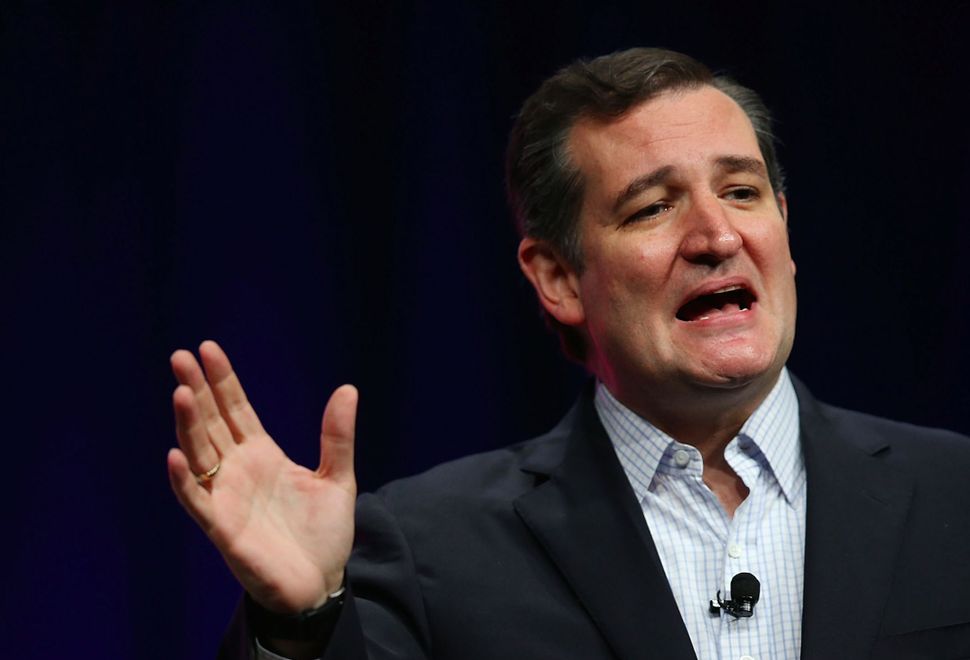 To many Jews, Ted Cruz’s attack on Donald Trump’s “New York values” . We are familiar with Republicans suspicious of “money and the media,” because 20 years ago they were the people complaining that the golf club was getting crowded with hook-noses. But to religious Jews like me, this vision of a materialistic, secular New York (“The line to get into Abercrombie & Fitch,” Cruz backer Kellyanne Conway explained, “is a mile longer than the line to get into St. Patrick’s Cathedral”) also sounds downright delusional.

Why? Well, Cruz may think that New York hates religion: “I apologize,” he told Sean Hannity smugly, “to the people of faith who are ridiculed and insulted by the New York media.” But cookie-cutter, evangelical Christianity aside, New York is basically the capital of American religion. Within an easy walk of where I was raised in Brooklyn, literally thousands of intelligent Jewish men forgo careers in order to study God’s law and raise large families in poverty. Offshoot communities in New Square and Lakewood notwithstanding, nowhere else in the United States can you find such intense piety and religious scrupulosity, let alone in such numbers.

Nor is it just Judaism. What other place in America has densely packed Fujinese Taoists or supports a Colombian witchcraft business? Beyond those niches, I would like to see Cruz or Conway walk into any of a dozen mosques on Coney Island or MacDonald Avenue (New York has 285 in total, far more than any other American city) and tell the worshippers there how “the emphasis is more on money than morality.”

How do anti-urbanites like Cruz get away with ignoring New York’s incredible religious richness? In part, they sneak in some nasty assumptions about what religion looks like, in which “values” revolve around maintaining midcentury sexual taboos and predictably signify social conformity. People with “values” are “just like us,” in a silent-majority, appealingly conservative sense. Cruz cannily exploited this hazy consensus when he told a questioner: “I think most people know exactly what New York values are.” But the thousands of diverse, quirky and countercultural religious groups in New York don’t fit this white-bread, silent majority view of faith. In fact, they challenge the whole idea of “values” as a social unifier or repository of American tradition.

More abstractly, many of us hold an unarticulated, unexamined version of what academics call the “Secularization Thesis.” That is, we think that as societies progress and modernize, religion diminishes in prominence and authority. In particular, commerce, big cities and modernity are supposed to erode religious belief. And if you care primarily about single, dominant religious institutions (like “St. Patrick’s Cathedral”) and raw numbers of believers, that’s true enough. But the blurry idea of single, authoritative majority religion simply isn’t useful to understand the yeshivas of Ocean Parkway and mosques on Coney Island Avenue.

Rather, contemporary New York suggests that big cities may be uniquely suited to the flourishing of another type of American religion. First off, big cities uniquely support poor, unassimilated, immigrant communities — the basis for diverse, intensive religious communities. New York’s economy can easily absorb and exploit masses of people regardless of their “values” or culture, and the city is large enough to host comfortably dozens of densely packed subcultures.

Second, a secular, rationalist and even cynical government and bureaucracy can bend to even the craziest particularistic rituals (see: metzizah b’peh). Similarly, “New York values” like brusque, business-like practicality and avoiding eye contact on subways may not be small-town or folksy, but they are the habits of tolerance that allow Hindus, Muslims, Catholics and Jews to live together in relative quiet. After all, what most non-Christians pray for from our neighbors is not love but indifference.

Finally, large cities’ secular cultural riches can actually feed religion. A friend doing a PhD in Bible recently told me of her exchange semester in New York, frantically taking trains between Union, NYU, Columbia and more for text seminars and Assyriology intensives. I myself make an annual pilgrimage to the Upper West Side to study and teach Talmud. On the “silent majority” theory of American religion, in which religious texts are basically just Republican Party hymnals, none of that matters much. But when we shift our attention to how and whether places support many, unusual and diverse religious traditions, then learned, academically trained scholars are a real asset.

Of course, all this is anathema to Ted Cruz. He doesn’t like Muslim immigrants, he wants government to implement a specific, Christian social agenda and, as when he scoffs at climate science, he happily plays on American anti-intellectualism. He has, in other words, built his life in opposition to just those forces that make New York religiously exciting. Which is fine, so long as we know enough to dismiss his dichotomy between the religious country and the godless cities. “New York values” are plenty religious; the religions in question just aren’t Ted Cruz’s.