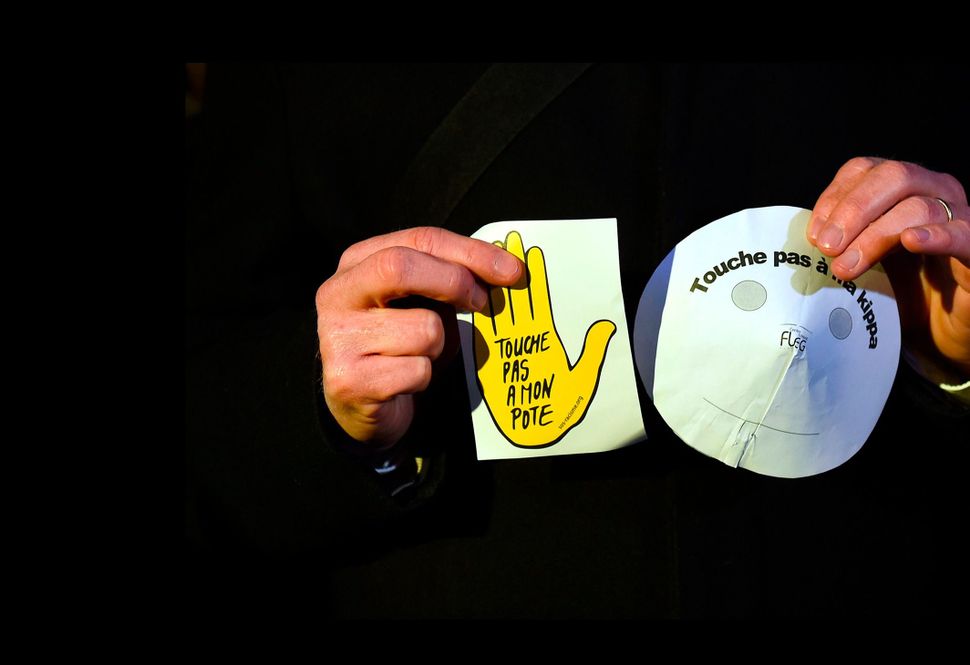 To be or not to be…willing to wear a kippah in public?

That is the question the French Jewish community, with Hamlet-like intensity and introspection, has been debating over the last few weeks. Even France’s non-Jews are making their opinions known, most notably by donning kippot in symbolic gestures of “solidarity.” It is, inevitably, a debate that reveals as much about politics and personalities as it does about the real stakes for the future of French Jews.

On January 11, a young Jewish professor named Benjamin Ansellem was outside his place of work, the Institut Franco-Hébraïque in Marseille, when a youth wielding a butcher knife pounced on him. The Torah saved his life — quite literally. Thrusting the holy book he was carrying over his head, Ansellem blocked the repeated blows until a passer-by intervened.

Caught by the police, the attacker, of Turkish-Kurdish origins, claimed he had acted in the name of Allah and the Islamic State group. All the assailant knew about his intended victim was that the young man was wearing a kippah and must be Jewish.

The third time was clearly the charm. Two earlier assaults on Jews in Marseilles — one last October, when a rabbi, on his way to synagogue with his son, was knifed; the other last December, when yet another Jewish teacher was assailed by a knife-swinging youth — failed to capture the government’s full attention. This time, though, the response was swift. Prime Minister Manuel Valls, “sickened” by the news, reaffirmed the government’s “resolution against those who attack the Republic,” while President François Hollande spoke forcefully about the “unspeakable” nature of the act.

Perhaps because it was unspeakable, other public figures sought other ways to declare their solidarity with French Jewry. The conservative Claude Goasguen, whose family roots are in the Catholic region of Brittany — and ideological roots in the extreme right-wing movement Occident — strode to the doors of the National Assembly with a kippah perched rakishly on his head. That it resembled less a kippah than a beret mattered less than the context: the National Assembly — the high temple of French republicanism and secularism, frowns on the wearing of any religious sign. Relishing the provocation, Goasguen pointed out that “the kippah is not the burka.”

But the kippah has also proved, in its own way, no less controversial. While Parisian politicians were donning them, the Jews of Marseilles were told to abandon them. Such, at least, was the advice of Zvi Ammar, the head of the city’s 80,000 Jewish community. “While waiting for better days,” Ammar suggested it would be best that Jews “hide themselves a little bit” by not wearing the kippah in public. Ammar insisted that Jews, “identified and targeted” as such, now risked death by wearing the kippah in public. In a televised interview, Ammar emphasized his reluctance in taking such a step. Rather than seeing this move as a kind of capitulation, it was instead a measure “to save human lives.” He added, “Unfortunately, when one is confronted by an exceptional situation, exceptional decisions are called for.”

Ammar probably did not imagine just how controversial his exceptional advice would prove. A chorus of criticism immediately rose from Paris, where several leaders of the Jewish community lambasted Ammar’s counsel. The head of CRIF, Roger Cukierman, dismissed it as pure “defeatism,” while the country’s chief rabbi, Haim Korsia, urged French Jews to “never yield and continue to wear the kippah.” Tellingly, this chorus included many non-Jews: Hollande found it “insupportable” that Jews should feel pressured to “hide themselves because of their religious choices,” while his Minister of Justice, Christiane Taubira, asserted that “all French Jews should feel safe.” Should they, then, continue to wear their kippot in public? Taubira squared that particular circle with a confident “Bien entendu.”

Inevitably, even the world of soccer has been drawn into the affair. The day after the attack, Korsia appealed to the fans of Olympique de Marseille, the city’s soccer team, to show their solidarity with French Jews by wearing a kippah, cap, hat, even a scarf to their home match against Montpellier on Wednesday. Several fan clubs have encouraged their members to put something, anything on their heads; by game time, the blue and white of OM might well have become the new black for kippot.

While this loud explosion of support is laudable, it might also strike many local Jews as laughable. For nearly a millennium, Jews have lived in Marseilles. By and large, the community, a mosaic of immigrants from places as diverse as Corfu, Smyrna, Baghdad and Alexandria, enjoyed the kind of stability and security that Jews elsewhere in France mostly envied. That Jews and Muslims lived in close quarters in the city center — so different from the segregated and suburban patterns in other cities — no doubt helped make Marseilles exceptional. So exceptional, in fact, that the city was spared the weeks of chaos that afflicted Paris and other cities during the 2005 riots.

Only time will tell whether the rash of attacks of Muslims against Jews deepens into a chronic condition. But what is now clear is the growing gap between France’s political class and Marseilles’ Jews. The former’s exhortations to the latter to continue wearing their kippot smack of the patriotic hurrahs offered by generals in Paris to soldiers in the trenches during World War I.

Yet more egregious are the symbolic gestures offered by France’s national political and religious figures. Wearing a kippah in the National Assembly or a soccer stadium allows the participants to think well of themselves, but will have absolutely no impact on the everyday life, and fears, of Jews in Marseilles. In terms of physical security, the government has already done so much; as Ammar drily noted, one cannot assign a gendarme to each and every French Jew. But real security will come only with deep political and economic reforms that will begin to repair the nation’s dissolving social fabric.

But that would take time and, more important, money — neither of which the Socialist government has. It thus turns to political symbolism on the cheap, as futile (though less harmful) as the its recent decision to claw back French citizenship from convicted terrorists who have dual nationality with another country.

Decidedly, the only thing rarer than the terrorist who will not pull the trigger because he fears losing citizenship to the country he despises, is one who will not unsheathe the blade because blue and white kippot have become this week’s fashion.