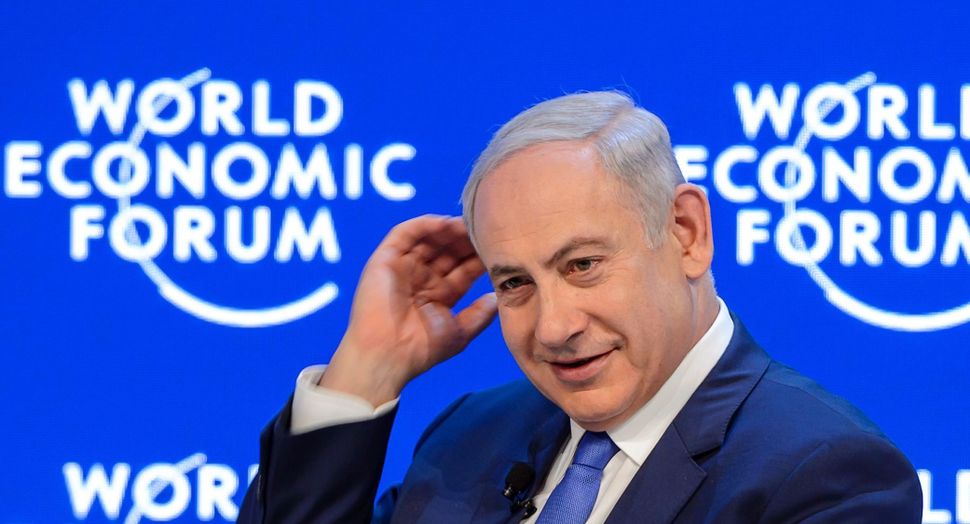 Remember the nuclear agreement between Iran and the West? You know — the one that Benjamin Netanyahu insisted was the biggest danger to Israel and the Jews since time immemorial?

Well, Israel’s military chief of staff told a prestigious defense conference last week that far from being a mortal threat, the deal has actually removed the most serious danger to Israel’s existence for the foreseeable future, and greatly reduced the threat over the longer term.

The chief of staff, Lieutenant General Gadi Eisenkot, was addressing the two-day annual conference of the Institute for National Security Studies in Tel Aviv on January 18. His 45-minute talk (video in Hebrew) was his first formal policy address since taking command of the Israel Defense Forces 11 months ago.

It was also the most direct public challenge yet posed by Israel’s security services to the repeated claim by Netanyahu that the Iran nuclear agreement threatens Israel’s survival.

There have been numerous indications in the past that Israel’s defense and intelligence branches don’t share Netanyahu’s dire view of the Iran deal. However, Eisenkot’s speech appears to be the first time the army’s contrary assessment has been presented formally in a public forum.

In fact, the 45-minute speech as a whole can be read as a point-by-point refutation of Bibi-ism. First, he pointed to a “decline” in the threats to Israel that are most commonly described in military doctrin as existential — that is, capable of threatening Israel’s existence. The reason for the decline in these threats is, first, that Obama’s Iran nuclear deal has removed the greatest threat to Israel’s existence; second, the Obama-Putin deal that removed Syrian chemical weapons; and third, the collapse of the Syrian state and its military. His second barbed observation was that the job of the IDF is to preserve the space that makes Israeli democracy possible and to guarantee a normal life to Israeli and Palestinian civilians. Third, in a little-noticed jab, he said that a worldview that always assumes “the worst-case scenario” is “no less dangerous” than excess optimism.

Israel’s chief military strategists commonly distinguish between threats that can be seen as threatening the state’s existence — principally conventional armies that can capture and hold territory or weapons of mass destruction that can obliterate entire populations — and non-existential threats, mainly terror attacks, which spread murder and mayhem but cannot undermine the pillars of the state.

Syria began handing its chemical weapons over to an international monitoring agency for destruction in 2013, following a U.S.-Russian initiative that has been widely criticized by conservatives. Eisenkot’s remarks appear to be the first authoritative Israeli acknowledgement that Israeli intelligence believes the arrangement has lifted the Syrian chemical threat. “The chemical threat to Israel is effectively nonexistent,” Eisenkot said.

As for the Iranian nuclear agreement, he said it is “a strategic turning point” that includes “many risks but also opportunities.”

In what could be seen as another subtle dig at Netanyahu, he added that it’s “naturally the task of the army, and my task, is to view situations from a perspective of both risks and capabilities, and in that manner to make a judgment. And not from an assumption of the worst-case scenario, because I think that is no less dangerous than to project an overly optimistic scenario.”

The other “declining” threat is the conventional military threat once posed by the Syrian army. It’s receding because of the civil war, which has tied down Syria’s military and weakened the Syrian state.

Eisenkot named two other threats that he described as “rising.” Neither is commonly deemed an existential threat, although both are causes for concern. That is, they threaten the lives of Israelis, but not the existence of Israel. One is the threat from “subnational” forces, mainly Hezbollah, Hamas and the Islamic State group. The other is the threat of cyber warfare.

He said Hezbollah, heavily funded by Iran, is currently the IDF’s “main concern,” given the extensive fortifications and rocketry the organization has embedded within Shi’ite civilian villages in southern Lebanon “to challenge the IDF’s air and ground superiority.”

Israel has a vast superiority compared to other forces in the region in air, sea, intelligence and cyber warfare, he said. “But this superiority is lessened when confronting organizations that operate in built-up areas with its defenses embedded in the civilian population.”

“This raises a serious question: How do you establish deterrence against an organization that has no governmental obligations, no legal obligations and no ethical obligations?”

Later in the conference Israel’s defense minister, Moshe Yaalon, a close ally of Netanyahu, presented the prime minister’s position on threat assessment. In what might have been a direct reply to Eisenkot, he said that “Iran has been our chief enemy since the revolution in 1979, and it remains so.”

“There are voices that say differently, that today the threat is ISIS,” Yaalon said. “But if the choice is between Iran and ISIS, I prefer ISIS. ISIS doesn’t have the capabilities that Iran has. If the diplomatic process in Syria should result in the entrenchment of Iran as the hegemon there, it would be a challenge for us.”

On the other hand, he added, “it’s hard for me to see how the talks in Vienna will bring any sort of resolution.”

Much of Yaalon’s speech, however, was directed at an attack from the right. Several hours earlier, the conference had been addressed by Education Minister Naftali Bennett, head of the settler-backed Jewish Home party, who accused the Netanyahu government of intellectual paralysis. He said the government’s failure to develop new approaches to Israel’s situation was weakening Israel in the face of the enemy. Yaalon replied, without mentioning Bennett by name, that some “voices in the opposition and even in the government” are resorting to “sloganeering.”

Israel’s defense establishment, including both the military command and its civilian leadership under Yaalon’s Defense Ministry, has faced withering criticism in recent days from the settler community and its political representatives, led by Education Minister Naftali Bennett, head of the Jewish Home party.

Bennett and his allies were critical of the IDF command during the Gaza war in 2014 for failing to hit Hamas in Gaza hard enough. At the time Bennett accused the IDF General Staff of timidity. The army’s Central Command, which covers the West Bank, is also under frequent attack for failing to root out and destroy Palestinian terrorism.

And this week Yaalon has been attacked furiously by settlers and their allies for ordering the army to evict a group of settlers from two houses that they said they purchased in the mostly-Palestinian city of Hebron.

A yet-to-be-implemented clause in Bennett’s coalition agreement with Netanyahu calls for a ministerial committee to take over settlement policy that is currently within the Defense Ministry. Such a move could create problems for Israel in the international community, as it could be read as a step toward changing the legal status of the West Bank, moving it from military occupation toward Israeli civilian control and thus partial annexation.

Eisenkot devoted most of his talk to conditions in the Palestinian territories. He drew a sharp distinction between the West Bank and Gaza. In the year and a half since Operation Protective Edge in 2014, he said, Hamas has rehabilitated its military capacity in order to challenge Israel. “Nonetheless, 2015 was the quietest year since the 1970s,” he said. “Not one Israeli civilian was killed, not one Israeli soldier was killed on the Gaza front.”

“There has not been a single case of rocket fire by Hamas from Gaza.” But there is a “worrisome phenomenon” of jihadist and Salafi groups rising in Gaza that are “trying to challenge Hamas by attacking us.” The situation, he said, “is combustible.”

In the West Bank, he said, the spread of stabbing and car-ramming attacks has presented a challenge to Israeli intelligence, because the attacks involve no organization and little planning and thus can’t be detected in advance. “These attackers are young people influenced by each other, by social networks, by the Koran and fanaticism.”

In these conditions, soldiers have just seconds to react. And in many cases, soldiers aren’t even nearby. “There are 161 settlements in Judea and Samaria, about 400,000 residents living among 2 million Palestinians. The populations are intermingled, which creates a huge operational challenge.”

Amid those complexities, he said — in yet another barbed comment — “our challenge is to match our military capabilities to the challenge of providing a feeling of security within a democracy.”

That responsibility goes in two directions, he said. In facing the Palestinian population “we insist on distinguishing between terrorists and the broad civilian population that goes to work every day in Israeli cities and West Bank industrial zones — 120,000 Palestinian workers who support 600,000 family members.”

Ensuring a normal life for those civilians, he said, “is an Israeli interest.” So is “preserving security coordination with the Palestinian Authority, which shares a common interest with us.”

“Terrorism in Judea and Samaria has gone on for years,” Eisenkot said. “You don’t have to be a major strategist to know that it will go on for many more years.” The challenge of the IDF, he said, “is to reduce terrorism and defeat it wherever we can.

(Note: I updated this article on Tuesday evening, January 26, in response to readers’ comments, after re=watching the speech and re-reading my notes, to reflect the fact that my use of the term “existential” was my interpretation of Eisenkot’s remarks. As I explain, the distinction between “existential” and “non-existential” threats reflects standard Israeli military doctrine, but Eisenkot himself didn’t use the words in this speech. I apologize for my mistake and thank my readers for pointing it out. — JJG)