Why My Jewish Vote Feels Irrelevant During Primary Season 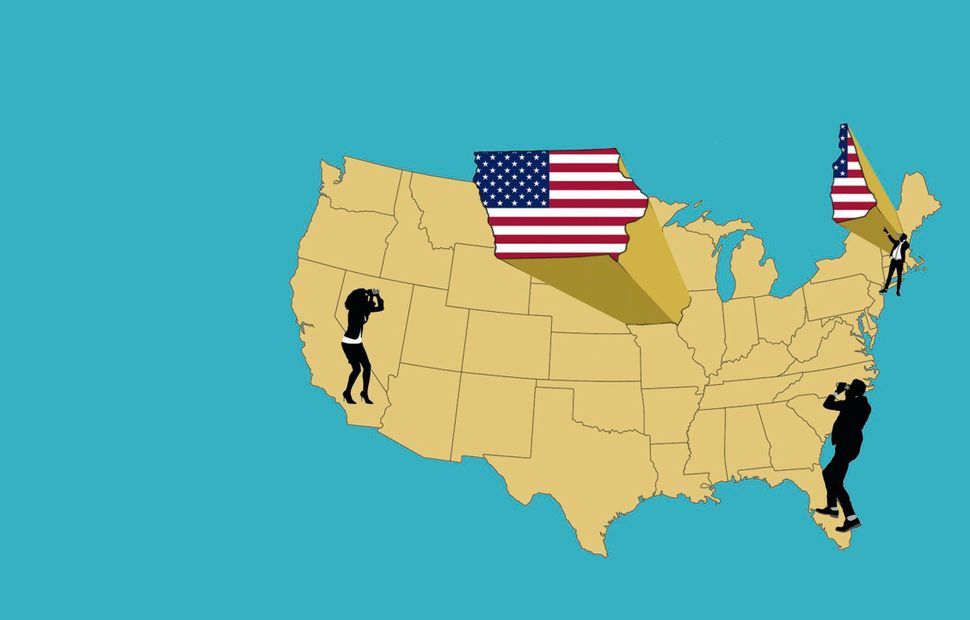 This is the time when, every four years, the civic nerd in me becomes jealous of the people living in Iowa and New Hampshire.

I want to be courted, patronized and promised all sorts of political gifts. I want to feel as if I can help shape the national debate. I want to be interviewed, counted, polled, stopped on the street during a snowstorm and asked my opinion as if it mattered. (No one’s ever done that, even in the warmer weather.) I want to experience the bone-chilling, heart-warming aspect of retail American politics in my neighbor’s living room, in the high school gym, in the local church — even though I don’t go to church.

Instead, like most American Jews, I’m a bystander to the primary process that selects the major party candidates to run for the most consequential job on the planet.

Some Jews are able to get up close and personal with candidates and guide the election narrative, but they have a great deal of money and the political clout that confers. Most of us do not. Most of us live in states that hold their primaries late enough in the process that our votes are often irrelevant, or at least rarely determinative.

Jews represent only 0.2% of Iowa’s population and only 0.8% of New Hampshire’s. And the next round of balloting later in February isn’t much better; we are but 0.3% of the population in South Carolina. Our number is higher in Nevada, 2.7%, but only Republicans go to the polls there. Democrats — and most Jews are Democrats — select candidates at caucuses, which are even more unrepresentative than ordinary balloting.

Super Tuesday’s 15-state extravaganza on March 1 includes only one state, Massachusetts, with a sizable Jewish electorate. The states where most Jews live — New York, California, Florida — are so far down the list that they feel like also-rans.

This is not just an issue for our tribe’s small slice of America. Iowa and New Hampshire are each more than 90% white, largely rural and conservative, with few immigrants and few poor people. The disenfranchisement that minorities already suffer in this country enables immigrants to be vilified and poverty to be ignored on the campaign trail, and it is only further amplified by how we conduct our presidential primaries.

It doesn’t have to be this way. Attempts to reform the primary process date back more than a century, and there is no shortage of sensible ideas. None of them is perfect. But I’ll sacrifice perfect for something more representative, inclusive and encouraging. As Elaine Kamarck, founding director of the Center for Effective Public Management at the Brookings Institution, wrote recently: “There are many ways to organize a nomination system and every one of them is more rational and orderly than the one we have now.”

So think about how we can do it better:

Create a National Primary Day. First proposed in Congress in 1911 and introduced many times since, this reform had a starring role in a major report issued by the Bipartisan Policy Center in 2014, so it’s obviously a captivating idea, if not a winning one.

A National Primary Day will even the playing field, make all voters take notice, increase turnout — which is shockingly low in primary balloting, even lower in caucus states — and compel candidates to address a wider range of concerns. But you can imagine the downside: powerful leaders from small states, especially Iowa and New Hampshire, crying bloody murder.

The truth is, small states do get overlooked in the general election and are, theoretically, more welcoming to candidates who may not have lots of money but are willing to spend as many days (53) in one state as Ohio Gov. John Kasich has so far in New Hampshire. (Almost as many as New Jersey Gov. Chris Christie: 68. Don’t these guys have day jobs?)

So if one, gigantic primary day won’t work, we can:

Create regional primaries. One proposal suggests that the nation be divided into four regions; another, six. The goal is similar: to group states into regions with roughly the same number of voters and hold sequential primary elections every month. Small states will inevitably be grouped with large ones, forcing candidates to address a more diverse electorate.

But won’t this still privilege one region over another? The answer to that is:

Rotate those regional primaries. The most logical of these proposals was made in 2000 by the National Association of Secretaries of State — the people who actually administer elections. The Northeast would vote in March, the South in April, the Midwest in May and the West in June. Four years later, the cycle would rotate.

Because these secretaries of state are politicians, too, they allow Iowa and New Hampshire to go first, before the rotation begins, so that candidates will still be incentivized to “homestead.” If that compromise is necessary to rationalize the rest of the system, it may be worth it.

Why have these good proposals languished? Kamarck says it’s because no one entity is in charge of the primary system, which is run by states and political parties. By her count, there are 153 independent political organizations with responsibility for establishing and implementing the rules — too many to reach consensus, too many invested in the status quo.

But the power of those political parties is crumbling in 2016, challenged by insurgents and fueled by resentment against partisan elites. That front-runner Donald Trump can refuse to participate in a GOP debate just days before the Iowa caucuses illustrates how weak the party’s authority has become.

If this creates an opening to reform the nomination process, all of us who want to make politics personal again, who want to be genuine participants in our nation’s major quadrennial civic exercise, must seize it. I’m not moving to Iowa or New Hampshire, and it’s my election, too.

Why My Jewish Vote Feels Irrelevant During Primary Season