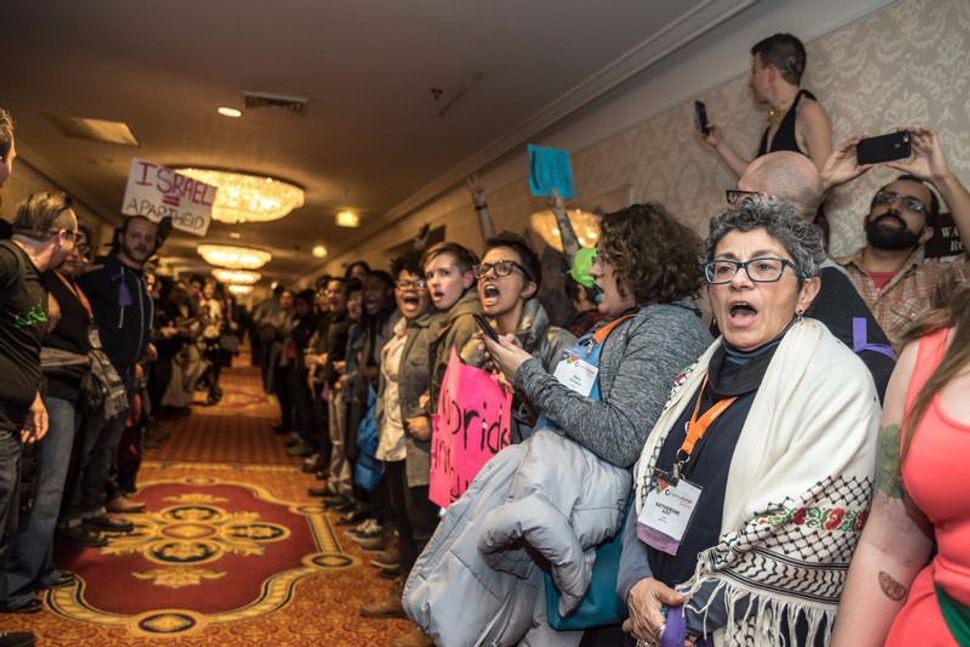 The debate over pinkwashing at the Creating Change conference in Chicago this past weekend was agitational. It was uncomfortable. It brought out tensions in our relationships, our values and our communities.

I was always taught that Shabbat is a time to imagine the world to come. So, when I learned that the Creating Change conference’s only Shabbat gathering was one hosted by A Wider Bridge, an organization that is focused on connecting American LGBTQ communities to the State of Israel, I knew that I wanted to help create another kind of space for welcoming Shabbat. A space that is about envisioning a world to come with justice and dignity for all peoples, not one that pinkwashes the policies of a state that tramples on the rights of millions under its rule.

I also knew that I wanted to join in the protest against a reception hosted by A Wider Bridge, which my fellow activists and I had sought to remove from the conference.

This protest has since been met with false accusations of violence and anti-Semitism, misreported claims that the protest disrupted a Shabbat service, and condemnation for its messaging and tactics. So often, calls for dialogue or critiques of protest rhetoric are invoked to mask the deep need for self-reflection and critique. Rather than listening to and grappling with the urgent cry for justice expressed at Creating Change, many commentators have reverted to the usual accusations.

Yes, banning an organization from a conference or protesting the reception it hosted may have been disruptive. But why are we so afraid of disruption?

At our alternative Shabbat service, hosted by Jewish Voice for Peace-Chicago and Coalition for a Just Peace in Israel-Palestine, I saw a community united by a shared sense of what it will take to bring about the world we want to see. Sometimes, that will include disruption. As we read from the weekly Torah portion about the splitting of the Red Sea, we asked one another, “What does it mean to divide and conquer? How can my true liberation be bound up in your drowning, your oppression, your suffering?” What we were welcoming that Shabbat was not rest, but action. Not comfort, but empowerment. The sea parting for all of us, or none. The world that is on its way, not the world as it is.

As the space filled with yearning and energy, we drank up the feeling of being surrounded by those who shared our commitment to building community in the name of justice for all. While others in the Jewish world are handwringing about the idea of “intersectionality,” we were striving to connect our struggles for liberation with those of others. 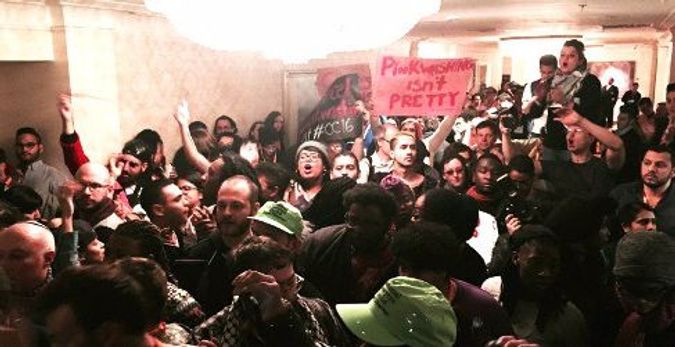 It’s because of this interconnected struggle that we can’t sit quietly and watch pinkwashing organizations like A Wider Bridge paper over Israel’s harmful policies toward Palestinians — policies that harm gay Palestinians in Haifa as well as in Ramallah. This pinkwashing is an integral part of Israel’s “Brand Israel” public relations strategy, which appeals to racist ideas of Palestinians, Arabs and Muslims as backward and intolerant in contrast to the supposedly enlightened Western liberalism of Israel. A superficial embrace of “gay rights” has been used as an effective way to advertise Israel’s Western identity, at the expense of Palestinians who are portrayed as needing to be “saved” by Israeli liberalism — even as they are simultaneously denied equal rights in the Jewish state. Pinkwashing erases queer Palestinians, or uses them as props for a savior narrative, while intentionally distracting from the oppression and violence that they face under Israeli rule.

A Wider Bridge’s work to brand Israel as gay-friendly and to align LGBT North American Jews and non-Jews with Israel plays a role in directly countering advocacy for Palestinian rights within the LGBT movement in the U.S. Their silence on the occupation enables it to be subsumed under a false image of Israeli tolerance.

The world we are building is one in which neither queerness nor Jewishness is used to excuse Israel’s policies. However, so long as that is what Jewish communal organizations insist on doing, we will carve out alternative spaces and we will speak out.

Those of us watching see that Israel’s veneer of democracy is deteriorating. We see separate legal systems for Israelis and Palestinians, increasingly personal attacks on activists, legislating against human rights organizations, and escalating state and vigilante violence that goes unchecked. Now is the time to disrupt this order.