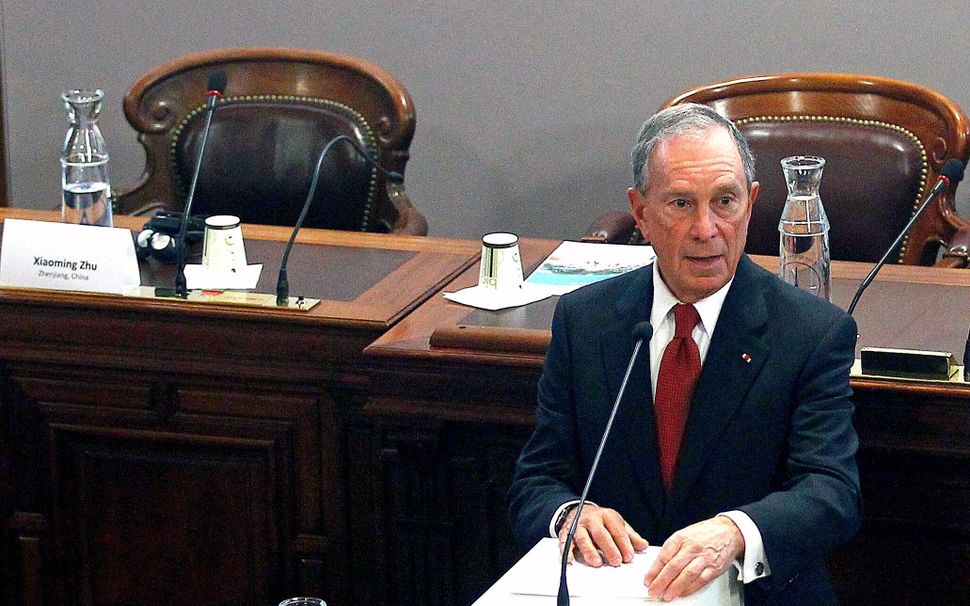 Just when you thought the 2016 presidential race couldn’t get any weirder, it got weirder. On January 23, associates of New York’s billionaire ex-mayor Michael Bloomberg let it be known that he’s exploring a possible third-party White House bid.

This isn’t Bloomberg’s first presidential exploration. It’s his third. His indecision could earn him the label once pinned on the perennial non-candidate Mario Cuomo: Hamlet on the Hudson. The difference is that Cuomo kept considering a run because people around the country kept begging him to. Nobody’s begging Bloomberg.

This year, though, Bloomberg might leap. His associates say he fears that the two major parties might force voters to choose between two oddball populists with scary views: Donald Trump and Bernie Sanders. Apparently Bloomberg feels the country needs a more sensible choice.

That presumably would be a choice between three guys in their 70s from New York.

Or, framed differently, between two billionaires and a socialist.

Or, if you will, between two wonkish secular Jews and a spectacularly self-absorbed Presbyterian-turned-Dutch Reformed-turned-Bible-thumping serial philanderer.

Bloomberg reportedly says he won’t run unless he sees a way to win. He’s set himself a March deadline to decide. But that means he’ll be pulling the trigger before all the data are in — whether Trump or Sanders will be nominated, and how he might or might not win.

We can answer some of his questions already. First, no third-party candidate has ever won the presidency. At most, a handful — Theodore Roosevelt in 1912, George Wallace in 1968, Ross Perot in 1992 — managed to siphon enough votes from the incumbent to crown the challenger.

The most successful upstarts generally figure this time will be different, that the two big parties have gotten too extreme and voters want a sober centrist.

In Bloomberg’s case, that means a marriage of the social liberalism that Democrats champion and Republicans vilify — he emphasizes gay rights, immigration reform and gun control — with the business-friendly economics that Republicans favor and Democrats seem to have abandoned. If he’s right, that’s the sweet spot that eases this year’s surging voter discontent.

Alas, he’s got it exactly backward. The crowds packing Trump and Sanders rallies around the country aren’t chanting for more social or cultural upheaval and a weaker economic safety net. Just the opposite. They want to know how they can feel safe again.

Trump and Sanders are both tapping into a widespread feeling of loss — lost jobs, lost hope for a better future, lost sense of one’s place in America and of America’s place in the world. Trump blames the dislocation on immigrants and minorities and “stupid” management in Washington. Sanders blames “the billionaire class,” by which he means conservative economic policies that have gutted New Deal guarantees over the past 40 years. Their answers differ, but their question is the same: What went wrong?

In the end, the main race might not pit Trump against Sanders. Most polls show Hillary Clinton beating Sanders for the Democratic nomination. Bloomberg isn’t afraid of a Clinton presidency, his aides say, but he worries that Sanders’s challenge will pull her to the left. His larger fear is of Trump and his incivility.

Bloomberg clearly doesn’t generate much interest. The race is between, first, Clinton and Sanders, and second between the Democrat and Trump. The margins separating Clinton from Sanders, and Trump from either of them, are statistically insignificant. Other recent polls, though, show both Democrats beating Trump. Sanders’s margin (54–39) is wider than Clinton’s (51–41).

The most important numbers, in fact, are the undecided. They’re more numerous with Sanders in the race. Voters aren’t certain who he is. They like him better than Trump. But they’re not sure he’s electable. It’s that socialist label.

There’s good reason to worry. In a June 2015 Gallup survey, only 47% said they’d vote for a socialist for president, while 50% wouldn’t.

Sanders seems to think he can explain socialism in a way that voters will accept. So far he’s not doing well. His platform is mainstream enough. It’s essentially a revived New Deal, aiming to restore the optimistic security that Americans enjoyed in the 1950s and that Swedes and Germans enjoy today. But he doesn’t say that. Instead he rails against that nasty “billionaire class.” It’s not clear whether voters share his distaste.

That Gallup survey raises another question that should trouble both Sanders and Bloomberg. It found 91% willing to vote for a Jew, behind a Catholic (93%), woman or black (92% each) but well ahead of a Mormon (81%), evangelical (73%) or Muslim (60%). Conventional wisdom, however, says the 9% who wouldn’t vote for a Jew understates the reality, because many others won’t admit being prejudiced. Even 15% is a lot of votes to give up before the campaign starts.

Strategists for years have insisted those “no Jew” voters wouldn’t have voted for a Democrat regardless, so there’s no net loss. But Gallup found that Republicans (95%) are more open than Democrats (92%) to a Jewish candidate, and independents (86%) least open.

Even more sobering: Voters were slightly more open to a Jewish president in Gallup’s 1999 survey, at 92%. Worse, this dropped to 89% in May 2003, following the 9/11 attacks and the Iraq invasion. Fully 18% that year said “having a Jewish president could present a problem when it comes to foreign policy (especially as concerns U.S. policy in the Middle East).” Just 65% said it wouldn’t make a difference.

One more sobering fact: Any of these candidates, except Clinton, would be the oldest person ever elected to the presidency. Sanders would be 75 when he takes the oath of office next January, Bloomberg 74, Trump 70, Clinton 69. Ronald Reagan, the current record-holder, was two weeks shy of 70. And some researchers say Reagan was showing early signs of Alzheimer’s disease during his second term. It’s hard to imagine any of the lead candidates serving through 2024.

Age aside, the Democrats just might be better off losing this fall. The last time the same party held the White House through two consecutive two-term presidencies was under James Madison and James Monroe, from 1809 to 1825. If that rule still holds, a Democratic victory in 2016 would mean a Republican sweep in 2020. And since 2020 is a Census year, a GOP sweep that year would give Republicans an advantage in reapportionment and guarantee GOP control of Congress for another decade. By that logic, it might be better to let the Republicans have the next four years to make a thorough hash of things, and then try to put the pieces back together. The counter-argument is that Trump just might be taking us down a dark road from which there’s no turning back.

The other alternative is a Democrat who’s not really a Democrat, who can genuinely shake things up and offer a vision of a better America once again. With luck, 2020 might then be a game-changer.