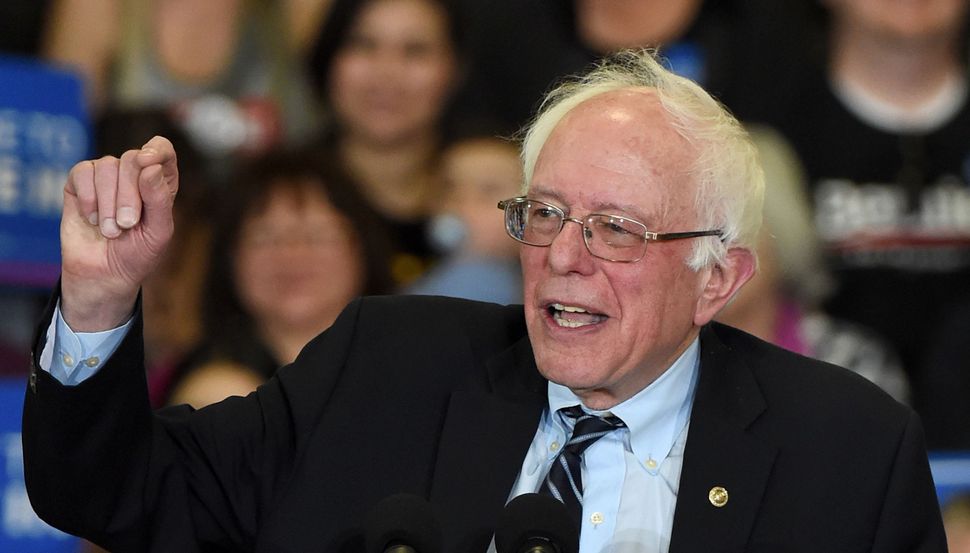 At a rally last October, Remaz Abdelgader — a hijab-wearing Muslim, a senior at George Mason University and the daughter of Sudanese immigrants — stood to ask Bernie Sanders a question.

She started by referring to the Islamophobic bigotry of many of the Republican candidates. As she continued, calling herself “an American Muslim student who aspires to change the world,” Sanders interrupted her to invite her up to the stage and embrace her, and then, respectfully, he gave her the opportunity to finish her question onstage on equal footing. How would Sanders respond, Abdelgadar asked, to the Islamophobia spouted by the Republicans and amplified by the media? Sanders gently took her hand and stood next to her at the lectern as he responded.

Had this scene been scripted, it would have been a remarkable tableau vivant. It was not rehearsed, but neither was it accidental. Sanders’s response to her question gave us a rich insight into the Socialist worldview that underpinned the Jewish and multicultural Brooklyn environment in which he was raised, which goes a good way toward explaining his broad and growing appeal.

Sanders began by equating anti-Semitism, racism and Islamophobia. He hearkened to his own Jewish heritage and recalled the murders of his father’s family in Nazi concentration camps. Racism is not only about pent up hatred and stupidity, he explained; it is also a tool that politicians and the wealthy elite use to keep workers divided and to weaken their efforts to organize. Politicians, he said, told white workers, “Hey, you think you’re in trouble, but you’re better off than blacks, that can’t drink out of water fountains and go to your school.” By pitting black against white, men against women and straight against gay, “that’s how the rich got richer while everybody else was fighting each other.”

In this brief moment, Sanders illustrated the central tenets of Yiddish Socialism, the dominant political and cultural current among the working-class Jews of Brooklyn where Sanders was born at the end of the Great Depression. In New York and elsewhere, Yiddish Socialists in the early 20th century founded and invigorated fraternal societies, newspapers, schools, athletic leagues, summer camps, theaters and, especially, unions. The immigrant generation were inspired by their experiences in the revolutionary movements in Russia, where intellectuals and militants from up to 100 ethnic groups learned to respect their own and one another’s cultures to be able to speak with and rally ordinary peasants and workers to fight the oppression of the Czarist State.

In America as in Russia, employers tried to pit one group against the other, and so Jews reached out to their co-workers and neighbors across races, ethnicities and religions. In the 1920s and 1930s, Jewish unionists and their Italian anarchist allies approached the very black and Puerto Rican workers who had been hired as strike breakers to join the union. Then they created organizational structures that encouraged workers of different racial-ethnic backgrounds to explore their cultures in a militant union context. No union did so more successfully than the International Ladies Garment Workers’ Union, which melded strike preparations and ferocious picket line defense training with multicultural sports tournaments and music, dance and theater festivals.

Yiddish Socialists succeeded in organizing the men’s and women’s garments industries, among others, and created the foundation for economic security for workers of all cultures. The unions they built gained increasing influence in local and national politics and helped pass New Deal, Veterans, and Great Society legislation that established middle class living standards for millions of American workers. Working with the Roosevelt, Truman and Johnson administrations, they fought for and won labor rights, social security, minimum wages and housing subsidy legislation, though not for everyone.

But the McCarthyist Red Scare of the late 1940s and 1950s suppressed much Jewish Leftist activism, and by the time a radical critique of American and Western society reemerged in the 1960s, many Jewish leaders, intellectuals and activists saw themselves as having a seat at the table.

Following World War II, these Jews — the children and grandchildren of the refugees from Czarist Russia — had begun to transition from Yiddish Socialism to Jewish Liberalism. Their critiques of capitalism softened and their solutions to social problems were more about reforms than radical systemic transformations.

But even many liberal Jews retained a sensibility about the importance of racial-ethnic cultural diversity to a healthy democratic and economically stable society. Radical and liberal Jews alike overwhelmingly supported the Black Freedom Struggle and Johnson’s Great Society programs.

It was in this environment in the early 1960s that Sanders joined the Young People’s Socialist League and organized for the Congress on Racial Equality and the Student Nonviolent Coordinating Committee.

For some, Sanders’s call for revolution is mild. Medicare for all and increased taxes on the top 1% won’t change the economic, political and social structures. Perhaps. Sanders has for more than 50 years embraced a form of socialism that is both radical in its critique of social injustice and pragmatic in offering solutions. But his vision is also deeper and more complex than most commentators understand. His “political revolution,” steeped in a specific tradition, time and place, does not privilege class warfare over identity politics, or vice versa. This is the key to his growing appeal.

Sanders is giving voice to an emerging current among those who occupied Wall Street, declared they are undocumented and unafraid, and insisted that black lives matter. He understands all oppression as an ecosystem. An injury to one is an injury to all. And the solutions have to be broad and interconnected. Throughout American history, too many movements for social justice have ignored, ridiculed or barred some other group. Sanders’s call to unite poor people, people of color, women, LGBT people, students, immigrants, people of all faiths and no faith, and others, is inspired by an emerging movement of inclusion that may prove to be longer lasting, more effective and more powerful than we have seen before in this country.

Daniel Katz is the author of “All Together Different: Yiddish Socialists, Garment Workers, and the Labor Roots of Multiculturalism” (NYU Press, 2013).