Stop Trying To Steal Bernie Sanders’s Red Flag — and Mine 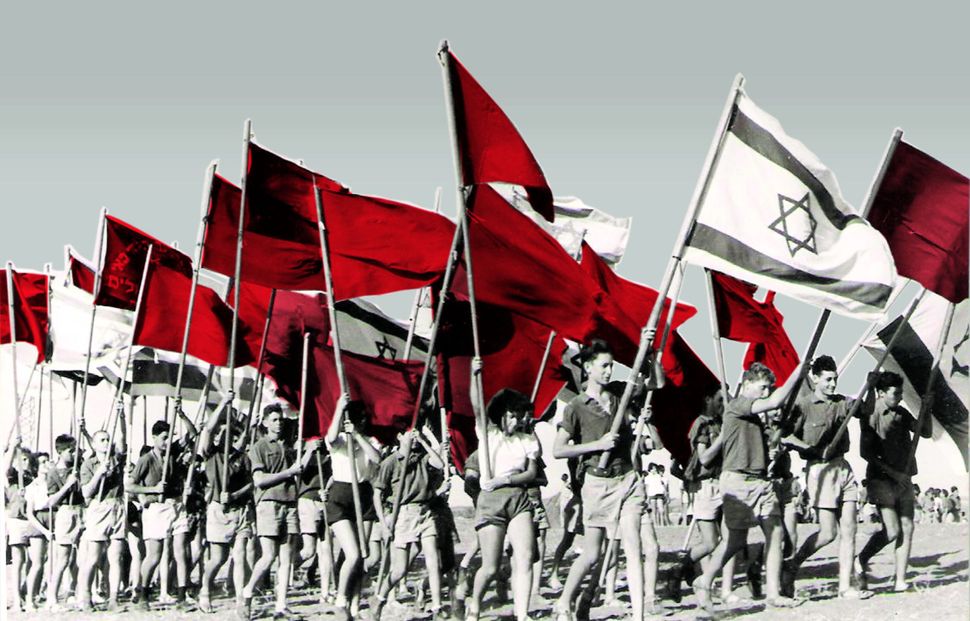 In the spring of 1968 I had a transformative experience that changed my self-awareness as a Jew and an American. I’ve been thinking about that moment a lot since Bernie Sanders’s presidential campaign turned serious — and especially since the story of his kibbutz connection has gotten him slammed as a communist.

I was spending the year on an Israeli kibbutz in the pre-college leadership program of my Zionist youth group, Habonim. That spring found the entire kibbutz movement, then still the revered icon of Israeli idealism, embroiled in a furious debate over the red flag of socialism. Would kibbutzim fly it from their grain silos on May 1, the international workers’ holiday?

Kibbutzim up and down the country had flown the red flag every year for decades, side by side with Israel’s own blue-and-white flag. After all, the red flag was the banner of democratic socialism long before the communists dreamed up their dictatorships. It was borne aloft by the British Labour Party and the French, German, Italian and Swedish Socialists. It was flown by Israel’s many labor parties and institutions long before Israel was a state. Surely no society was ever more democratic than the socialist kibbutz, and the red flag was a symbol of that democracy.

But 1968 changed things. Only a few months had passed since the Six Day War of June 1967, when Israel faced down three Arab armies bristling with Soviet weaponry and Soviet advisers and vowing to exterminate the Jewish state. In the early years after the Russian Revolution, many socialists and democrats hoped it might prove to be the birth of a better society. Some were disabused sooner, others later. By the 1950s, the last traces of hope had turned to disgust, even among the hardiest diehards. In 1967, the disgust turned to hatred.

It seemed the kibbutz movement — indeed the whole Israeli labor movement, parties, unions and all — was in the throes of an identity crisis. Half the movement wanted to be scrubbed clean of anything evenly vaguely associated with the Kremlin. Nobody wanted that more than the young kibbutzniks who’d just come back from the war. The other half insisted, as one old-timer told me then, that “we can’t let the murderers steal our flag.”

Watching from my desert kibbutz, an American high school graduate on a one-year student visa, I was experiencing my own personal identity crisis. Growing up in a Labor Zionist family on Long Island, I was accustomed to being an oddball in the neighborhood. But I’d always known I belonged to something larger. After all, it was my movement, Labor Zionism, that had built the Jewish state. And we were part of a worldwide movement for social justice, in which Jews played a leading role. The leading voice of the American Socialist Party from its founding days was a Yiddish newspaper, the Jewish Daily Forward. The kids in my neighborhood didn’t know any of this, but I treasured it in private and waited for the day I’d get to Israel.

Now I was in Israel. So what the heck was going on? How could the red flag and the blue-and-white flag not fly together? Obsessing over the evils of communism could only lead to trouble — every draft-age American teenager knew that in 1968. Why was there a problem? I’d come to Israel seeking answers, not wrenching questions. And the flag debate was deeply wrenching. 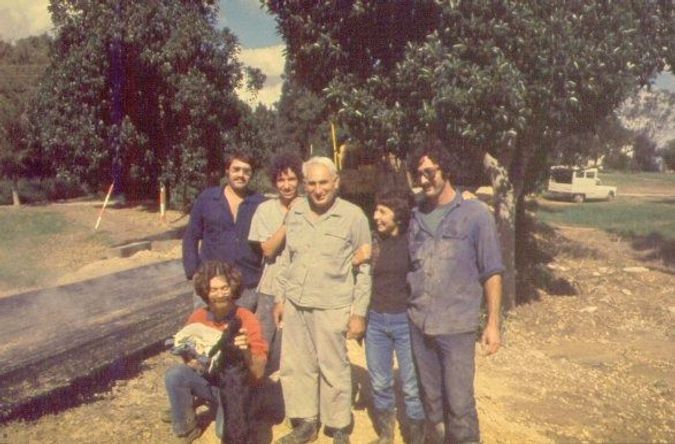 The harder truth is that for all my certitude, identity for me had always been a jumble of confusion and contradiction. My boyhood heroes were Davy Crockett and David Ben-Gurion. I’d learned by junior high that Americans divided the world into bad communism and good capitalism, with no room for the middle ground or third way that I’d been raised to appreciate as a matter of course. Swedish welfare and Israeli workers’ communes weren’t things you gabbed about on the playground.

Even when the 1960s arrived and radical politics became fashionable among my peers, it never felt quite like my revolution. My friends dreamed of hippie communes in San Francisco with Che Guevara posters on the wall and Jimi Hendrix playing on the stereo. I dreamed of driving a tractor.

My refuge was the Zionist youth group, where we spent weekends and summers singing the hymns of Haim Nahman Bialik — “Let our hands be strong redeeming the soil” — and the British Labour Party anthem that I’d learned as a child at the Seder table: “Though cowards flinch and traitors sneer / We’ll keep the red flag flying here!” 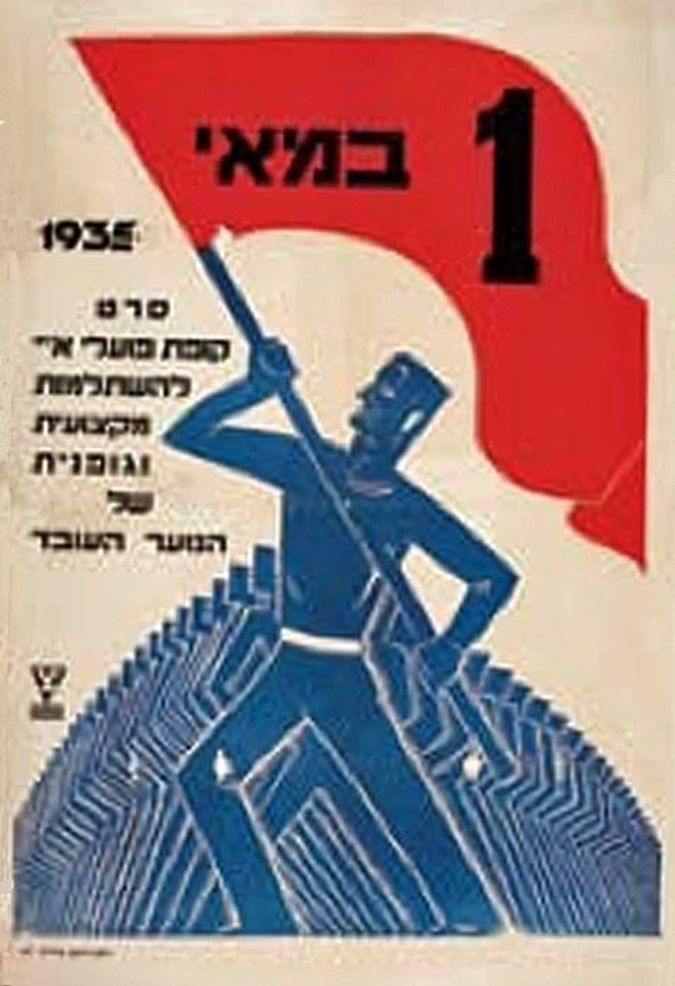 Unabashedly Red: An Israeli May Day poster from 1935.

Now I’d finally arrived in Israel, just in time to see the red flag taken down and folded away. Identity and belonging were turning out to be much more complicated than I’d imagined.

The year in Israel left me more conflicted than ever. Returning home for college, I threw myself into campus Zionist activism. My time was divided between fighting the student left over Israel’s right to survive and fighting the Zionist mainstream over compromise and coexistence. Four decades later, I’m still fighting both fights. One side is still trying to steal my red flag. The other side is trying to steal my blue-and-white flag.

There are times when I feel like I’m back at summer camp and my life is one big game of Capture the Flag.

Most days, the red flag battle of 1968 seems like ancient history. But it’s come alive again, thanks to Bernie Sanders and his mysterious kibbutz adventure. Once Haaretz discovered that he’d been a volunteer at Kibbutz Sha’ar HaAmakim in the early 1960s, journalists started poking around. They discovered that the kibbutz had flown the red flag and belonged to a Labor Zionist faction, Hashomer Hatzair, that had once believed in the Soviet illusion. The news came back to America, and we were off to the races.

There will be lies told about Sanders in the months ahead, just as lies are told about every political candidate when the race heats up. But few will be more misleading, and more defaming of Israel’s founders and pioneers, than the tales told about the red flag.

Stop Trying To Steal Bernie Sanders’s Red Flag — and Mine