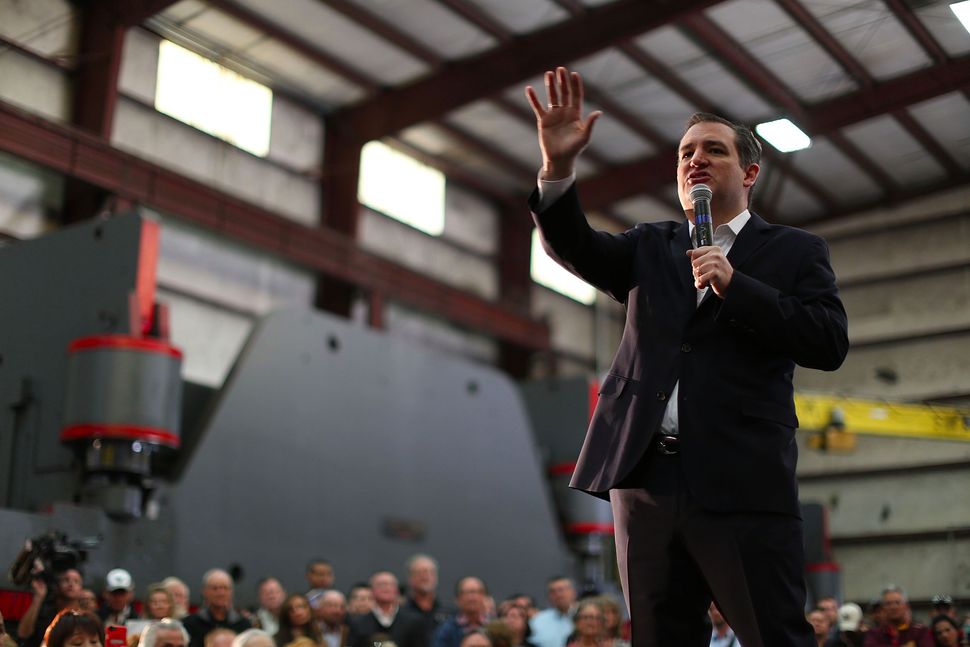 As I follow your presidential campaign, I’ve often heard you speak of how your faith informs your policy positions and how the United States is a nation based on what you call “Judeo-Christian values.” Upon winning the Iowa Caucuses, you declared in your victory speech that “Judeo-Christian values built this nation.”

The Constitution entitles you to your opinions and religious beliefs and even affords you the right to express those convictions in your pursuit of public office. But as a Jew and a rabbi, I am writing to ask you to please leave me, Judaism and my people out of your rhetoric. Don’t use “Judeo-Christian” to try to appropriate my religion and my people’s history to advance your agenda.

I can appreciate that Jews and Christians share many similar values and beliefs, just as I recognize that many of the values I learn from my tradition are also shared by many other religions. But while our respective religions have many things in common, we also diverge in significant ways. You and I read the same Bible very differently and draw sometimes contradictory conclusions from it. I honor those differences and I affirm that Jews and Christians (as well as Muslims, Buddhists, Hindus, atheists and many others) can come together to exchange ideas and live at peace with one another. But your particular brand of Christianity bears little resemblance to the Judaism I practice, and when you use the term “Judeo-Christian” to really mean “Christian,” you erase the distinctions between our faiths — and you essentially erase Jews.

It is well documented that you subscribe to a theology known as Dominionism — a philosophy you learned from your father, Rafael Cruz, a self-styled evangelical preacher. Dominionism asserts that the American government and the institutions of society should be dominated by fundamentalist Christians and that our laws should be modelled on a literal interpretation of Biblical precepts. You have asserted in the past that the founders of our country were actually a secret society of evangelicals. You’ve suggested that you were sent on a mission by God to run for president. I’m no expert in Christianity, so I’ll let your fellow Christians argue with you over theology, but I’m asking you to stop implicating my religion and me in your plans.

You claim that your “Judeo-Christian values” are the basis of your opposition to the equal protection of the law for same-sex couples. When you speak of “religious liberty” what you mean is the right of businesses that provide public accommodations to discriminate against people and impose their religious beliefs upon their employees. You have defended the display of exclusively Christian symbols in public buildings under the banner of “Judeo-Christian values.”

When you use the term “Judeo-Christian,” you give your particular brand of Christian ideology a veneer of universalism it does not merit. It is misleading to suggest that your ideas are part of a “Judeo-Christian tradition.” The term “Judeo-Christian” was originally coined in the 1930s by liberal Christians and Jews who sought to encourage ecumenical relations between those two faiths for the purpose of fighting the growing racism, xenophobia and nativism of that time. But in the 1950s the term was adopted by political conservatives who used the phrase “Judeo-Christian values” as a cudgel in the fight against fellow Americans they accused of being “Godless communists.” And since the 1970s the call for a return to so-called “Judeo-Christian values” has been used by the Christian right as code language to their base for a particular brand of conservative policies that are anything but inclusive.

And while I’m at it: Please leave Israel out of this, too. You claim to love and support the state of Israel and, as with “Judeo-Christian,” you invoke your love of Israel to bolster your bellicose foreign policy. You recently invited the endorsement of Pastor Mike Bickle of the International House of Prayer. Bickle, like many evangelical Christian Zionists, believes we are living in the “end times” and that Jesus will return any day now to take up good Christians in the Rapture, leaving the rest of us to languish in a millennium-long war whose battlefield will be the land of Israel. Bickle, among other meshugas (that’s Jewish for “crazy-talk”), teaches that Hitler was a “hunter” sent by God to drive the Jewish people to resettle Israel, thereby hastening the battle of Armageddon. But instead of distancing yourself from Bickle, you’ve embraced his endorsement. If this is what support for Israel means to you, you can keep your support, along with your “Judeo-Christian” theology.

What makes this country great is not “Judeo-Christian values.” It’s the rule of law and the civil liberties guaranteed by our Constitution. America’s freedom of religion, with its wall of separation between religion and state, is what makes this a land for everyone — believers and secular people of all stripes. It’s our religious liberty that actually allows religion to flourish here like nowhere else in the world. The American tradition of religious liberty is what created a welcome home for Jews fleeing persecution. Theocracies like the one envisioned by Dominionism stifle religious expressions, pervert true faith and corrupt effective government.

Senator Cruz, if you want to promote your agenda and claim it is a reflection of your religious values, go right ahead — but don’t exploit my religion and my people to do it.

Salomon Gruenwald is a rabbi in Denver, Colorado.