To all those sensible people who are just as outraged as I am about the rise of Donald Trump: please curb your uproar.

We all know Trump has gone farther than we would have liked, but our anger only legitimizes his success and gives fuel to his momentum. Criticism is a compliment in itself, garnering publicity and discourse around its subject. Instead, we should ignore him or, if we must, ridicule him, just as the British parliament has done in a recent debate over whether to ban Trump from the UK. As outspoken and dramatic as the GOP candidate is, we know he’s just putting on a show. So, for the sake of the America we love, let’s treat him like the clown he really is, with indifference and occasional laughter.

To that end, we have to stop assigning gratuitous titles to him. Some have called the Donald a “fascist,” others even likening him to Hitler. Trump may be bad, but I implore my fellow liberals and enraged conservatives not to overstate. The fascists of the past century, especially Hitler, are remembered for mass murder and aspirations to world domination. Trump is just a comedian turning the Republican primaries into a circus. Let’s not compare him to mass murderers; he really does not even deserve it.

Some have called Trump a “racist” and an “Islamophobe.” I will not deny that he has made some pretty racist comments about a number of minorities, or that he has proposed a policy to ban Muslims from entering America, but we must remember that he is putting on a show. He wants us to get angry and shower him with the gift of criticism. But he is not serious, so let’s not take him seriously.

If we understand that he is not serious, everything starts to make sense. We realize that he doesn’t really mean it and that he actually has nothing to offer us except a comedy show. Yes, it worries me that he is doing well in the primaries. Yet all this shows is that there are people who do take him seriously and that is partly because sensible people like us have been giving him undeserved attention. We really should treat him like the laughing stock he is; after all, no one takes a comedian’s jokes personally, right?

Donald Trump Is Playing 'Mr. Neutral' on Everything From Israel to the Klan — and It's Working

At the same time, there is a real chance of Trump winning the nomination. Democrats, fear not: if he wins, it will only improve our chances. Republicans, do everything you can to ensure he does not win the nomination because he will turn your party into a laughing stock.

So, whether Democrat or Republican (or Independent, for that matter), next time you see Trump at a rally or a debate, just sit back, enjoy the show, laugh a little and go on with your lives.

Ido Levy is a Jewish Israeli-American from New York City, currently studying for a BA in Israel at IDC Herzliya. 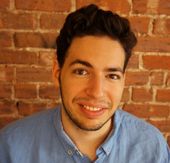