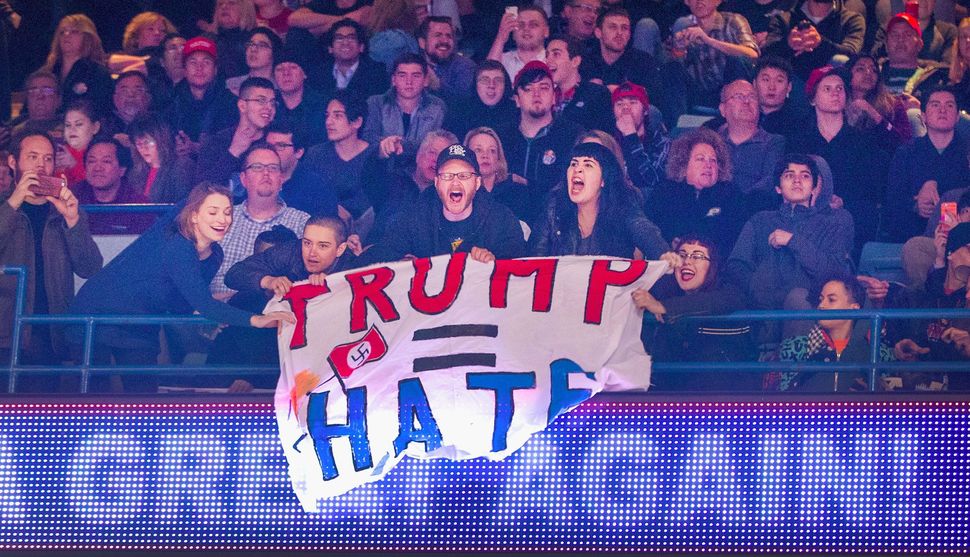 On social media and over drinks, American liberals are discussing — sometimes jokingly and sometimes not — how to move to Canada if Donald Trump makes it into the White House. Between the violence against minorities at Trump rallies, the Nazi-like salutes and the candidate’s choice to tweet a quotation from Benito Mussolini, the idea that “it can’t happen here” is quickly giving way to the fear that it just might. But what the brave activists in Chicago have shown us is that our response to Trump’s barbarity should be not a massive evacuation, but a massive confrontation.

After hundreds of activists showed up to demonstrate against Trump at his March 11 Chicago rally, the event was abruptly cancelled. Since then, Trump’s defenders and a great many moderate liberals have been painting the activists as hypocrites, partisans who talk of free speech but silence others when they don’t like what they hear. But this is farcical. Trump gets more media attention than any other candidate. And although the First Amendment enjoins the state from silencing you or your group, it doesn’t protect you from unfriendly people who don’t like what you have to say.

Besides, it’s not like the activists are trying to stamp out just extreme speech. The Trump movement has already proven that it’s ready to use physical violence to enact its code of white nationalism. In no uncertain terms, the black, Muslim and Latino activists who are putting their bodies on the line in places like Chicago are acting in self-defense.

Jews always say in response to the Holocaust, “Never again.” Well, this activism is the living embodiment of that slogan. And if we liberals really believe in those two words, we should quit joking about moving to Canada and put our bodies on the line to protest Trump, too.

Trump has gone on the offensive against Bernie Sanders supporters, saying that the “communist” candidate has joined with angry racial minorities in forming a disruptive counter protest. It all sounds harsh, brash and hyperbolic, but there’s almost a refreshing honesty to it. Sanders may not be a communist — he’s a social democrat and a former kibbutznik, meaning that he actually believes in democratic freedom — but Trump is absolutely right that those who follow Sanders ideologically are predisposed to fighting Trump’s rhetoric in the streets as well as in the voting booths. Socialists of all varieties throughout history have fought and died to crush fascism, from the brigades of the Spanish civil war to resistance in Germany to the defense of Greece from the Nazis.

And those people who are on the receiving end of Trump’s racial incitement can’t wait until November to silently defend themselves. 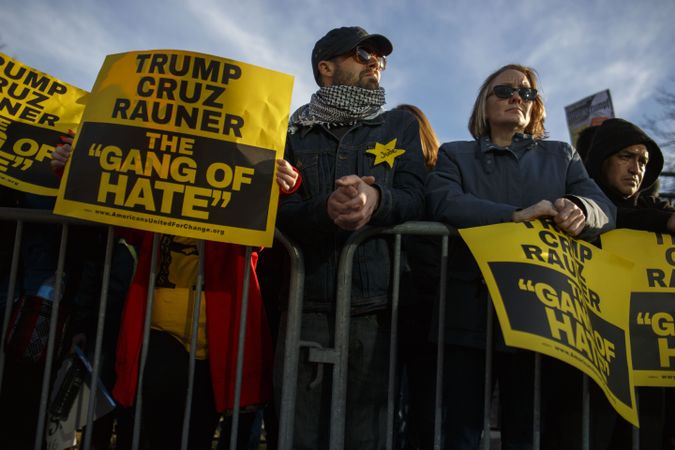 This needs to be said plainly: Trump’s political ideology can only be defined as fascistic, and any other view is simply pedantic denialism. But it’s not his administration we should immediately fear. He’s a man with no loyalist machinery in Congress, and it’s safe to say that as absurd as he might be as a leader, he wouldn’t get that much done. For example, his audience loves his chatter about changing laws, but thankfully that’s not in the executive’s domain. The fact that the Republican Party is aghast at his ascendance is almost proof enough that he’s not interested in enacting the establishment’s laundry list of rollbacks of social progress.

What’s more troubling is that he’s brought angry, violent white nationalists out of the shadows. His rallies have become violent mobs directed at the mere presence of non-whites and Muslims. His popularity has emboldened organizations like the Ku Klux Klan and the online community Stormfront. While Trump’s presidency would be a comedic circus ending in Washington gridlock, he would give confidence to the most dangerous elements of American society. Trump might not organize Brown Shirts, but don’t be surprised if you see towns and schools districts become more overt and aggressive with their bigotry.

As scary as that sounds, it’s also the reason those of us who are seriously pondering fleeing should reconsider. Emigration is often a luxury of the privileged. It’s only an option for people with global contacts, advanced job skills that can transfer overseas, second and third languages and, of course, saved liquid assets to make the journey possible. People without the means to emigrate are going to be the ones most vulnerable to the rise of Trump’s followers, and there is perhaps no more illiberal act than politically abandoning these vulnerable people for our own personal, immediate comfort.

Americans who fear Trump should also see their political crisis in a global context. This candidate’s ideology is not an isolated phenomenon. Although European social democracy can be tempting for American liberals, the continent also features France’s National Front, Greece’s Golden Dawn, Hungary’s Jobbik and general nationalist antipathy toward migrants and refugees. Some suggest that liberal Jews who hate Trump should just move to Israel, but when you read reports about how , it doesn’t seem like such a great alternative to Trump’s America.

“For what it’s worth, it’s far worse in Europe,” noted American dissident and scholar Noam Chomsky told me in an email in regards to the rise of neo-fascism. When asked what the antidote to the American predicament was, Chomsky responded, “The only ways I know of are the old tried and true ones: education, organization, such actions as are appropriate.”

Watching Trump’s capitulation in Chicago, it’s clear that we need to keep the heat on him with our actions. It might be the only thing that can stop him.

Ari Paul is a journalist in New York City who has covered politics for The Nation, The Guardian, VICE News, In These Times, the New York Observer, The Brooklyn Rail and many other outlets. Follow him on Twitter @AriPaul