Should I Feel Guilty for Worrying About Palmyra’s Stones, When ISIS Slaughters Humans? 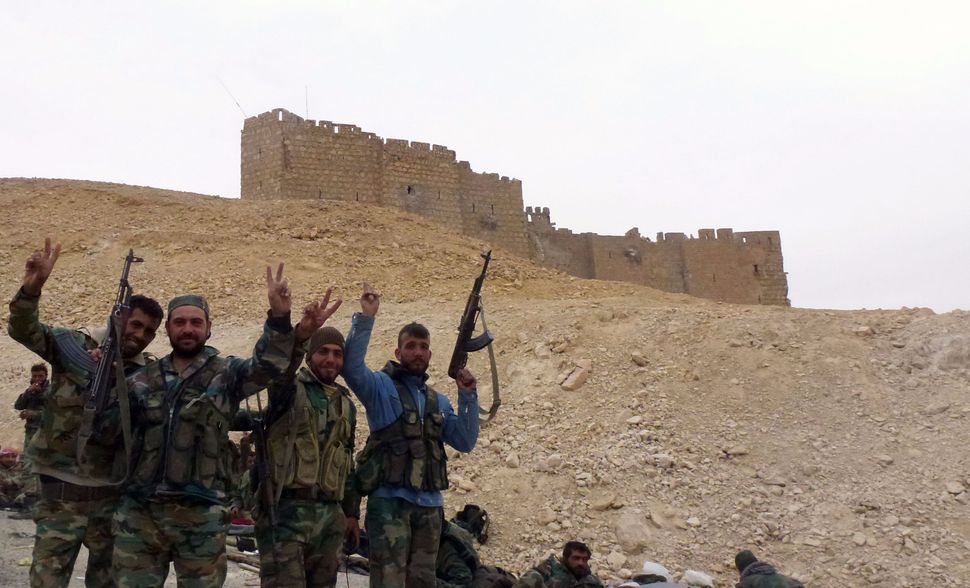 Mere stones broke my heart even as people lost their lives.

For so many years, that has been the guilty paradox that plagued my feelings when I thought about the brutality of the Taliban and Al Qaeda and, later, the so-called Islamic State group.

Now, with the Syrian Arab Army’s recapture of Palmyra (with help from the Russians and Iranians), the early reports are coming in on the destruction wreaked by the Islamic State group on that city’s unique and irreplaceable monuments — and the destruction, too, from the Syrian soldiers and the Russian Air Force in their battle to retake it.

So far, initial reports have a vaguely Jewish tone: It could be worse.

For someone like me, who actually laid eyes on that Roman-era city’s stunningly preserved Temple to Baal — yes, the same deity that Elijah vanquished in the Hebrew Bible, though still around, it seems, when the Romans ruled 800 years later — this provokes a wary expulsion of breath and a sense of prayerful hope.

Immediately, I want to know: What has happened to the temple? What is the condition of the museum that held so many of the city’s public statues, inscriptions and art? How much of this city’s wide, main stone street remains with its majestic Corinthian columns on each side of the avenue that I myself once walked along?

I had the place virtually all to myself back then, in 1992, when I visited Syria for Washington Jewish Week. And the sense of ancient beauty amid desolation in the desert allowed my inner eye to easily imagine the shops with their merchants, lined up alongside the meticulously reconstructed avenue. The shoemaker, the barber, the horse trader in each stall between the columns — it was as if they were all just out on a lunch break and could return any minute.

Yet, the fall of the city meant much more than the destruction of these stones. An estimated 55,000 of Palmyra’s 70,000 modern-day residents fled their homes when the barbarians known as ISIS took the city last May. Thousands more died, many killed brutally. Why did the stones rather than the people have this hold on my emotions? 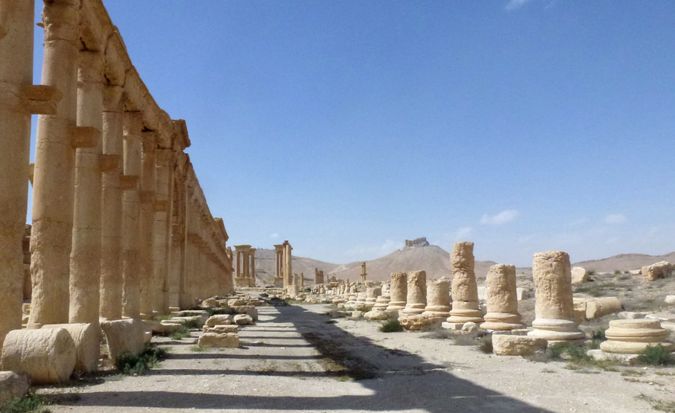 This was a feeling I knew even earlier, when the Taliban destroyed the twin giant Buddhas of Bamiyan, in the mountains of central Afghanistan, in March 2001. The World Trade Center’s twin towers still stood tall at that point. But in the remote Hindu Kush, the two giant Buddhas were blown up at the order of Mullah Omar, the Taliban leader who was then hosting Osama Bin Laden.

Their contempt for human history was like a warning flare thrown up, alerting humanity to the violence they would soon visit on New York City. But who knew that back then?

Again, I was distraught and heartbroken, and it was personal. In 1976, not long after I had graduated college, I had spent three weeks living in the dead of a snowy winter under the benign shadow of those Buddhas, built in the 6th century CE into the rocks of the mountains surrounding the city. They were incredibly moving, a kind of Mount Rushmore pointing toward the divine. Even more amazing were the paintings an intrepid visitor could see if he scaled the rickety steps leading up to the arches above their heads. There, Buddhist artists of the Kushan Empire combined their traditional iconography and the Greek artistic influences left behind centuries earlier by Alexander the Great to paint stunning Greco-Buddhist images in which the Gautama looks akin to Apollo. It was truly, and stunningly, a monument to East meeting West.

In Syria, the temple to Baal was also amazing to me, most of all for the way the structure seemed to mimic recreations I had seen of the Temple in Jerusalem renovated by King Herod. I knew Herod had died shortly before the Common Era. The Bel Temple, as the shrine to Baal is called, was dedicated in 32 CE. Did they, perhaps, have the same architect? Their similar designs suggested that this, too, was a place where humanity’s opposites met, mixed and merged.

When Al Qaeda killed some 3,000 people in my home city just seven months after the Buddhas were blown up, it changed my life, along with the life of this country, and the world, forever. Like many of my fellow New Yorkers, I was devastated. I was acutely aware of the individuals who died, all the more so as their lives were made real through The New York Times’ thumbnail profiles of each and every one of them.

But the heartsickness I felt at the demolition of human civilization’s precious and irreplaceable patrimony was somehow not less than this, if different, because I had seen the structures with my own eyes. And this troubles me vaguely to this day.

It vexed me all the more this week when I looked up the history of the Taliban’s interactions with the Buddhas. I discovered that for several years before it blew them up, Mullah Omar, the sect’s leader, had staved off calls for their destruction, on the grounds that they could no longer be considered idols. 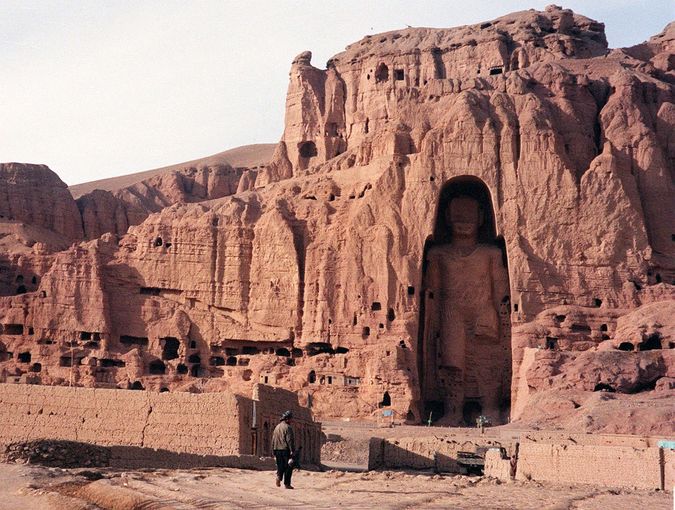 Lost Buddha: A 1997 photo shows an Afghan walking near the world's tallest standing statue of Buddha in Bamiyan province of Afghanistan. Image by Getty Images (8)

“I did not want to destroy the Bamiyan Buddhas,” he is reported to have said in an interview with rediff.com, an Indian news outlet, in 2004. But “some foreigners came to me and said they would like to conduct the repair work of the Bamiyan Buddha that had been slightly damaged due to rains. This shocked me. I thought, these callous people have no regard for thousands of living human beings — the Afghans who are dying of hunger — but they are so concerned about non-living objects like the Buddha. That is why I ordered its destruction. Had they come for humanitarian work, I would have never ordered the Buddhas’ destruction.”

One can and must do both kinds of work, of course. But for Omar, it seems, the line between idolatry and our precious treasuring of history is violated when we divert any resources to the latter from human needs — never mind his own contempt for human life.

For me, and I suspect, for many others, our capacity to value both humans and human history is no sacrilege; it’s an obligation. But apportioning our resources and our emotions between the two is not meant to be easy.

Larry Cohler-Esses is the Forward’s assistant managing editor. Contact him at cohleresses@forward.com

Should I Feel Guilty for Worrying About Palmyra’s Stones, When ISIS Slaughters Humans?