Want To Keep Students from Turning to BDS? Try Mock Peace Negotiations With a Twist 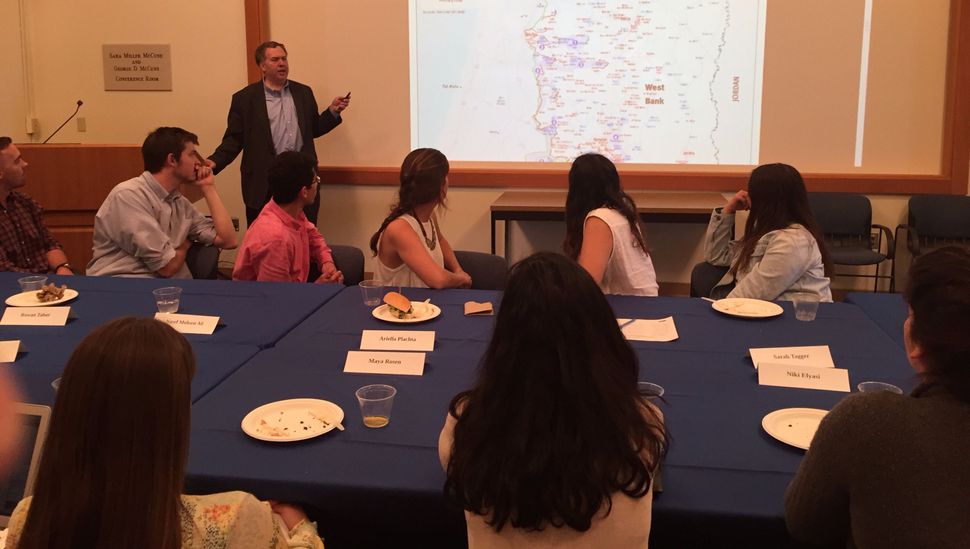 As the two of us headed to the University of California, Santa Barbara to give a talk about Palestinian-Israeli peace back in 2009, we didn’t think much about it. We’re both veterans of this conflict, accustomed to the regular interactions between Palestinians and Israelis in the Middle East, and to the civil, collegial and interactive nature of the policy conversation in Washington, D.C. We’d given countless talks about the issue over the years. We had no reason to think this would be different.

The talk itself went quite well. The real surprise came when we had lunch the following day with Jewish and Muslim student leaders. During the lunch, we were impressed by the knowledge and enthusiasm of all the participants. So it came as a real shock to us when, at the end of the meal, one of the students casually mentioned that for most of the participants, this was the first time they’d had a conversation about this issue with their counterparts.

Since then, we’ve appeared together at scores of campuses across the country, and every year (with an interruption during David’s time on Secretary of State John Kerry’s peace team) we have returned to UCSB. The most common reaction we get from students is wonderment at seeing a Jewish and an Arab policy analyst engaging in a civil conversation aimed at exploring the nature of the conflict and possible solutions — without resorting to insults and recrimination. The solution-oriented dialogue we took for granted in our D.C. policy universe was clearly not the norm outside the beltway.

Much has changed since 2009: The prospects of a two-state solution in the foreseeable future have dimmed, and the discourse on campuses has become more shrill and divisive. Yet one thing remains constant: In every campus we go to, there is always a group of students who want to learn about the different perspectives on the conflict, and who are still passionate about peace. For us, the challenge has become how best to serve this constituency, equipping these students with knowledge and modeling civil dialogue.

But perhaps the greatest challenge is how to revive a sense of possibility for a generation that has never experienced firsthand the hope engendered by the historic events of peacemaking in the 1990s. This generation has experienced the conflict only through the prism of repeated failure, shattered dreams and bloodshed.

In this task, we find the model developed at UCSB to be very worthy of replication elsewhere. Our visits come as part of ongoing activities organized by the UCSB Taubman Symposia throughout the academic year, which situate our events in a cumulative process. The combination of guest teaching in an ongoing class on Jerusalem along with a public lecture in front of several hundred students ensures a diverse audience.

But the most unique feature of our UCSB program is the mock negotiation exercise, where we ask students who self-identify as pro-Israel to play the role of Palestinian negotiators and vice versa. It’s all too common in such a highly emotive conflict for partisans to dismiss the views of the other as mere posturing or as unfounded propaganda. Rather than simply spelling out the various parties’ positions to the students, we challenge these students to articulate the logic and sets of interests that lead each side to adopt its position.

This is not an emotionally easy process for students who feel a strong affinity to one side. As facilitators, we can see in the students’ facial expressions and body language clear signs that many of them struggle to argue for the very same positions they have grown accustomed to criticizing. So it’s important for us to ensure that they are not made to feel uncomfortable with their views or pressured to abandon them. Instead, we hope that students leave this exercise with a greater understanding that the positions of the other side are based on a set of facts, interests and narratives that need to be understood, even if they are not adopted, by anyone who seeks to end this conflict.

As the exercise progresses, we see the participants becoming more comfortable with the idea that people can have their own narratives and that often, although not always, these different narratives do not come from a place of malice. The participants begin to understand that this conflict is not a morality play, as they may hear from some of their teachers in the classroom.

In the end, we believe that the effort is worth it when students — often those who were most skeptical at the start — tell us that they leave the exercise understanding that the conflict is more complex than the bumper stickers or fliers on campus suggest it is, or that they now appreciate that both sides believe they have justice on their side. Our hope is that students will use the knowledge they gained to promote dialogue and practical forms of coexistence rather than engage in BDS or other forms of divisive, mutually delegitimizing activities.

While the trajectory of the Palestinian-Israeli conflict will not be determined by what happens on American university campuses, these dynamics are still very much relevant. The current state of the debate creates an environment that is highly unhospitable to students who want to engage on this issue, and doubly so if they want to engage in collaborative coexistence activities. The stories we hear about students feeling pressured by their peers not to engage with the “other side” are shocking, not least because this runs counter to the very ethos of education. What students learn at universities shapes their views for a long time to come.

We’ve both been around long enough to remember the days when the discourse about Palestine and Israel was focused on the denial of the other’s very legitimacy. When we hear echoes of the same on today’s campuses, we can’t help but fear that the students who emerge from this discourse are doomed to repeat the same mistakes of the past, to the detriment of Palestinians, Israelis and American national interest.

Offering an alternative model showing that civil dialogue is possible, and that such a dialogue could suggest solutions to the thorny issues of Middle East peacemaking, can help counter this negative trend on campuses. We believe that students who engage in the mock negotiation exercise get a personal taste of the sense of possibility that we got to experience firsthand. And we hope that other individuals and universities draw on this model to take up the task of countering the current trends.

David Makovsky, director of the Washington Institute for Near East Policy Project on the Middle East Peace Process, served on Secretary of State John Kerry’s negotiating team during the 2013–2014 Israeli-Palestinian talks.

Ghaith Al-Omari, a senior fellow at the Washington Institute for Near East Policy, previously served as an adviser to the Palestinian negotiating team.

Want To Keep Students from Turning to BDS? Try Mock Peace Negotiations With a Twist