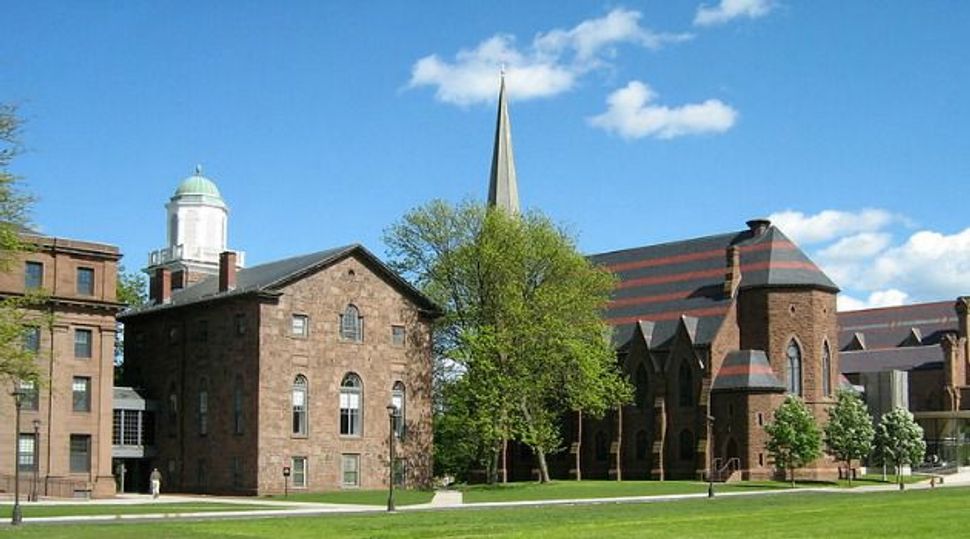 When I arrived at Wesleyan last fall, I thought I would be involved in Israel politics despite the campus political climate. Instead, I got involved because of it. Wesleyan’s reputation as a strongly pro-Palestine campus had preceded it, and I admit that I had been anxious about coming in a Zionist, even a progressive one.

When I came to campus, though, I was met with diverse opinions. Instead of the loud yelling of two polarized groups, I heard students exchanging ideas thoughtfully — though rarely in agreement — and leaving the conversations with respect, compassion and nuanced approaches to their ideas. And when members of four different Israel-Palestine groups convened last week at a panel in the Bayit, Wesleyan’s communal Jewish space, I was reminded of why I am so proud to be a part of my campus’s open and pluralistic Jewish community.

The Wesleyan Jewish community is an Open Hillel, meaning that we are not bound by the standards, rules or donor politics of other Hillel-affiliated organizations. While Hillel International’s standards of partnership prevent Jewish students from hosting or partnering with individuals and organizations who are deemed too critical of Israel, the Jewish community at Wesleyan welcomes all views into our space, thanks to the student leaders and activists who made Wesleyan an Open Hillel in 2014.

At last week’s panel, members of Jewish Voice for Peace, Cardinals for Israel, Wes United with Israel, and J Street U at Wesleyan explored their personal relationships with Israel/Palestine politics on Wesleyan’s campus and how they navigate their political views in Jewish communal spaces. Though many of the panelists’ views were affirmed in their Jewish communities, that was not the case for everyone. When discussing her relationship with both Israel and the Jewish community, Yael Horowitz, a member of Jewish Voice for Peace, said: “Judaism inherently points towards justice, towards tzedek. Israel doesn’t speak for me, and my Judaism is just as important.”

That students who care deeply about their Judaism are welcomed into our community, regardless of their opinion on Israel, is to me the reason our community is thriving. Rather than furthering some leftist agenda or forcing political opinions on my peers, my school’s Open Hillel allows us all to celebrate our Jewish identities, as well as push ourselves to think critically about our own opinions.

The passion I see in my peers who engage with Israeli-Palestinian politics, regardless of their political affiliations, gives me so much hope about the future of the Holy Land. My voice is not just heard, but valued. My views have been challenged, certainly, and I often leave conversations grappling with the questions they provoked, but I am always met with compassion.

And this campus makes me feel closer to Israel. My community’s plurality doesn’t alienate me, but pushes me to think deeply about the conflict. When the Bayit embraces students with diverse political opinions, and when we have the opportunity to engage with the issues that we feel so deeply and passionately about, my peers and I are able to develop our opinions in an informed and responsible way. As one of my peers, Grace Rubin of Cardinals for Israel, said about her relationship with Israel: “I’m proud of my opinions, of how they’re nuanced and of how they’re constantly growing and shifting — and yes, I’m pro-Israel.”

The openness of dialogue in this campus’s Jewish community never allows us to be blindly opinionated, or to trust that we are always right. Rather, we are constantly assessing the subtleties of our opinions, strengthening and shifting them as we continue to learn more about the world around us.

It’s easy, I think, for older Jewish communal leaders to be afraid of communities like mine. Young people are painted as notoriously unpredictable, as too young, too naïve, too immature to engage with people with whom we disagree without exploding. Yet as Ella Israeli, a member of J Street U, said at the panel, “The more I talk to students on this campus, the more I realize that we have more common ground than other people would like to believe.” It might be effective to paint campus groups as entirely in opposition to one another, even as enemies, yet this does not have to be the case. Certainly, the groups have different goals and different values, but are we enemies? Far from it. We are all committed to justice, and to learning from each other and challenging one another as our generation tries to forge a better path.

It’s tempting for adults to dismiss college students as starry-eyed idealists. But as young people, we know that at the end of the day, we have the potential to make the world a better place. When we have the spaces to explore this potentiality fully, we bring a new vitality to the conversation. We engage with one another, and we challenge both our peers’ beliefs and our own. We grow as Jews and as people. Jewish communal leaders looking to understand our generation ought to listen to us.

Anna Fox is a student at Wesleyan.