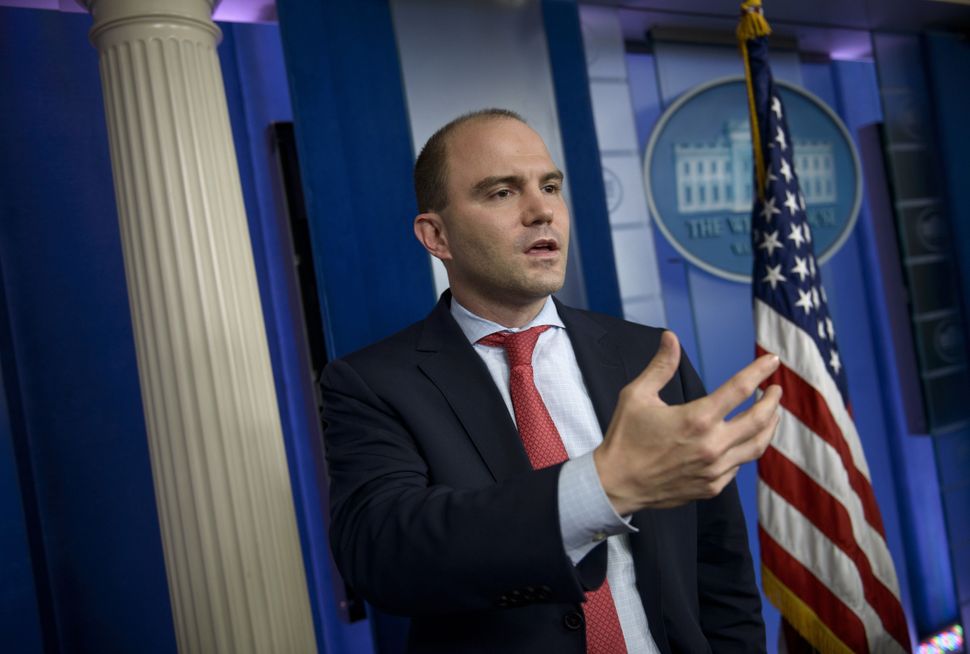 It’s hard to know whose face was more red — White House foreign policy wunderkind Ben Rhodes or Jake Silverstein, the editor of The New York Times Magazine — in the days following publication of the magazine’s embarrassingly frank May 8 profile of Rhodes.

Rhodes, the president’s deputy national security adviser for strategic communications, is under fire for dishing all too freely to the reporter, freelancer David Samuels, on the selling of last summer’s Iran nuclear deal. As for Silverstein, he’s accused of publishing what critics call a hit piece by an outspoken opponent of the Obama Iran negotiations — one who presented himself as an open-eyed observer without acknowledging his own leanings.

Samuels is no neutral bystander. He spoke strongly against the nuclear talks during an April 2015 panel discussion at the conservative Hudson Institute. Even earlier, in 2009, he published an essay on Slate.com arguing the “rationality” of an Israeli air strike against Iran’s nuclear project.

The Times article has been delighting administration opponents with its inside account of how Rhodes, who was an aspiring novelist before entering politics, tweaks the White House’s messages for willing and sometimes gullible journalists to share with the public.

It’s also touched off a furious side debate over Samuels’s description of two prominent journalists, Jeffrey Goldberg of The Atlantic and Laura Rozen of Al-Monitor, as “handpicked Beltway insiders” who “helped retail the administration’s narrative.” The two are complaining to Silverstein that Samuels misrepresented them as administration shills without giving them a chance to reply.

Goldberg goes a step further and charges in a blog post that Samuels bears some personal “animus” toward him, based on some unpleasant history between the two. It goes back several years to a failed negotiation to bring Goldberg from The Atlantic to Tablet Magazine, where Samuels’s wife, Alana Newhouse, is the editor and Samuels himself was a contributing editor (he’s now literary editor).

Full disclosure: Both Goldberg and Newhouse are former Forward staffers, though they didn’t overlap. Goldberg moved on before I became editor in 2000; Newhouse served under me as Arts & Culture editor, and moved to Tablet in 2008 after I stepped down. I’ve had complicated relationships with both, now long past, but I greatly admire their work, and I think they know it.

In Samuels’s most damning passage, he writes that the Iran deal was sold to the American public through a “largely manufactured” narrative — namely, that Washington could work with Iran once it elected a “moderate” president, Hassan Rouhani, in 2013.

What’s more, Rhodes tells Samuels that while he’d “prefer” that Rouhani “turns out” to be moderate, the administration is “not betting on that.” The agreement, Rhodes notes, is “state to state,” not with any particular Iranian faction.

Actually, Samuels notes, the nuclear talks secretly began months before Rouhani’s election, when Mahmoud Ahmadinejad was still president. This means the “moderate” storyline is a dodge. “Even where the particulars of that story are true,” Samuels writes, the “implications” offered to the public were “often misleading or false.”

Conservatives are now citing the article as proof that the nuclear deal was based on a pack of lies. At least one, Illinois GOP Senator Mark Kirk, is calling for Rhodes’s resignation.

The article is long and engaging, and manages to slip almost unnoticed between direct quotes by Rhodes, along with other current and former administration aides, and Samuels’s own observations. For example, although it’s been widely reported that Rhodes denies Rouhani is a moderate, he never actually says that. It’s Samuels who puts “moderate” in quotes and makes it a critical factor in ensuring the deal’s public acceptance — and by implication, its legitimacy.

In the actual Iran nuclear debate, the central question wasn’t whether the regime was moderate, but whether the deal’s actual terms enable America and its allies to prevent Iran from acquiring a nuclear weapon and for how long. The debate was about numbers of centrifuges and quantities and levels of enriched uranium. Centrifuges arise only once in Samuels’s article, when he notes that Rhodes doesn’t seem to have much “passion” for such “technical specifics.” These are “matters for negotiators and area specialists,” Samuels writes.

One of the critical questions debated was whether the West would have tools to monitor Iranian compliance, since both sides assumed that Iran might try to cheat. That is, that however moderate the regime looked, it couldn’t be trusted.

The election of Rouhani did enter the debate, but not as an indication that the regime could be trusted. His election simply installed a regime that was willing to negotiate seriously. Obama’s diplomats secretly started talking to Iranian officials months before the election (first reported by Laura Rozen), but the focus was whether and how to negotiate, and went nowhere. Only once Rouhani entered did negotiations get serious.

What does arouse Rhodes’s passion? Samuels says it’s “his own sense of the urgency of radically reorienting American policy in the Middle East in order to make the prospect of American involvement in the region’s future wars a lot less likely.”

What would this radical reorientation look like? In another passage, Samuels explains — without quotations or attribution — his understanding of Obama’s regional goals. That, it turns out, is not any known Obama policy but a favorite right-wing talking point: “By eliminating the fuss about Iran’s nuclear program,” Samuels writes, “the administration hoped to eliminate a source of structural tension between the two countries, which would create the space for America to disentangle itself from its established system of alliances with countries like Saudi Arabia, Egypt, Israel and Turkey. With one bold move, the administration would effectively begin the process of a large-scale disengagement from the Middle East.”

The idea that Obama wants to disentangle America from its alliances with Israel, Saudi Arabia, Egypt and Turkey and bond instead with Iran is a popular fantasy on the anti-Obama right. One of its most articulate presentations was a February 2015 essay in the online Mosaic magazine by Hudson Institute fellow Michael Doran.

Doran shared the April 2015 Hudson panel stage with Samuels. The session was moderated by another Hudson fellow, Lee Smith, who is also a senior editor at the neoconservative flagship Weekly Standard and a regular contributor to (wait for it) Tablet.

Tablet and Mosaic are both highly regarded as journals of Jewish thought. Both are funded by philanthropist Mem Bernstein, who gives prodigiously to promote Jewish conservatism.

As for their access to the White House and The New York Times Magazine, that part is free. And priceless.