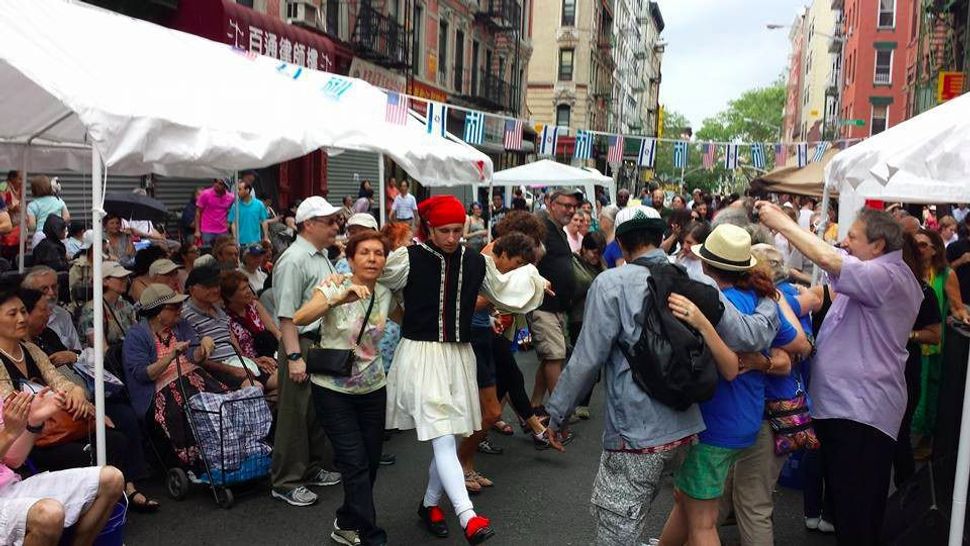 Most of the year, the stretch of Broome Street between Allen and Eldridge Streets, on the Lower East Side in New York City, is fairly quiet. The majestic Kehila Kedosha Janina overlooks Chinese restaurants and repair shops as cars and motorbikes speed by on Allen Street’s southbound branch. But this Sunday, the block was crowded with the joy and celebration of hundreds as they came to celebrate a subset of New York Jewry that, though perhaps not as famous as the Lower East Side’s Ashkenazi community, is neither unforgotten nor unknown. There was Jewish music, there was Jewish food, and there was Jewish celebration.

The annual Greek Jewish Festival is held by the Kehila Kedosha Janina synagogue, the Western Hemisphere’s only Romaniote synagogue and a major center for the diaspora of Greek Jews in New York City. The festival celebrates the century-long presence of Greek Jews on the Lower East Side, and the continued vitality of Greek Jewish and Sephardi culture in New York today. Attendees — Greek, non-Greek, Ashkenazi, non-Jewish — came from across the metropolitan area to see the historic synagogue, hear Greek music, eat Greek Jewish food and celebrate this Jewish culture.

On the ground, the scene was beautiful: the buzzing chaos of a crowd lusting after bizkocho, the round sesame cookies Christian Greeks call koulouria; the strumming of a bouzouki on a stage, and the cacophony of English, Greek, Hebrew, Chinese, Ladino and Yiddish around this one-block stretch of Broome Street. I sat at the festival, eating bizkocho and boureka and pickled mango, marveling at the crowd and the happy feeling that the festival produced.

Before the festival, I sat down with Andrew Marcus, the festival’s organizer, to discuss the event and the Greek Jewish New York it celebrates.

Tell us a bit about yourself.

I was born in Brooklyn. But my father was raised in the Greek Sephardic community on the Lower East Side, around Kehila Kedosha Janina, and my brother and I also had our bar mitzvahs there.

I was one of the last students of Hy Genee, who died in 2006. He led the services and the community for almost 50 years, and he taught me for my bar mitzvah. He probably knew the most about the Romaniote tradition and helped keep it alive. My father has been president of the synagogue since then. He does a lot of the day-to-day stuff like maintenance and other work to keep the doors open. I’ve followed his leadership and I’ve become more involved over the years, especially with outreach to the local community and the younger generation.

So it’s sort of a family project then?

Basically, yeah. But my father’s been involved for over 20 years, and as I’ve gotten involved — since my bar mitzvah — I’ve caught up with more of it. I joined the board of KKJ in 2014. 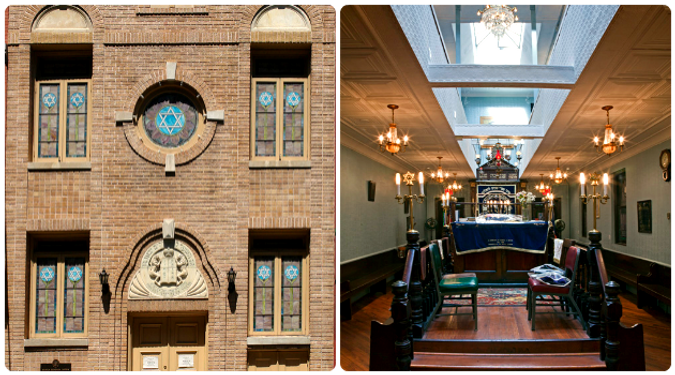 So can you tell us more about the Kehila Kedosha Janina community and Greek Jewish life in New York?

KKJ has had Shabbat services continuously for 90 years, which we still do today. Beyond services, we’re open on Sundays as a museum, and we also host events like lectures, movies and concerts throughout the year.

The community in NYC first formed in the early 20th century with Jews from Greece and the Balkans, who were concentrated on the Lower East Side. After World War II, as they moved up the economic ladder, these Jews moved to Brooklyn, Long Island and New Jersey, so the community on the Lower East Side was smaller and Greek Jews were more dispersed. We had a core group of congregants led by Hy Genee during the more difficult years, and we’re still here.

We’re the only Romaniote synagogue in the Western Hemisphere, but our community has both Romaniote and Sephardi members, and for both, we’re the only venue for Greek Jews to come learn more and express their traditions. And with the museum, outreach and the festival, we’re engaging the next generation of the Greek Jewish community. We also have a Greek Jewish Young Professionals Network.

It’s really interesting to hear you mention the long Greek Jewish, Romaniote and Sephardi history on the Lower East Side. I feel like in the American Jewish imagination, the neighborhood is imagined as this Ashkenazi monolith. How do you push back against that history?

We’ve been on the Lower East Side for 90 years and have played a unique role in the neighborhood. We’re one of five remaining synagogues on the Lower East Side from hundreds that were once there, and we can still tell the story of the Greek and Sephardi communities that were concentrated around Orchard, Rivington and Broome Streets. Ours was the only one built specifically as a synagogue, and the only Romaniote one; there were a number of other Sephardic synagogues in storefronts, but these were closed as they moved.

Beyond that, we’re the only venue for Greek and Sephardi Jews to express their heritage in the area, and we’re the only remnant of that once-strong Greek and Balkan and Turkish Jewish community on the Lower East Side. Our older members, who are still on the Lower East Side, have stories about when they or their parents came, and the Ashkenazim didn’t think they were Jewish. “You don’t speak Yiddish! You’re not Jewish,” they would say. And obviously there were more Ashkenazim in the neighborhood. But we were here, too.

Many people come now to the synagogue; the Tenement Museum (who we work with) and the Museum at Eldridge Street attract tourists, but we’re now in the online reviews and tour books, too. Some people know about the community that was down here, but others had no idea that there were Greek Jews, or that the neighborhood they see as “Chinatown” was ever Jewish.

Switching gears here — why a festival?

Greek Orthodox churches have had these festivals for a long time in their neighborhoods, and growing up, my family would go to them. We loved the music and food. So we had been talking — if they could do it, why couldn’t we? Then two years ago, I decided, “Let’s do it. Now or never.” I did some research on street fairs and the permits you needed and made a presentation to the board, and we decided to run with it. We were already the destination for Greek Jews, but we wanted to bring ourselves to the public in a fun, exciting way. We reached out to community members and applied for grants and got sponsors to support us.

The first year, we were unsure about the reception, but we got a huge response: 2000 people, and the festival is one block! There was dancing to music in the streets, where people’s parents and grandparents first settled when they came to the United States, which is significant in a meaningful and fun way. It was also a good way for KKJ to reach out to the local Jewish community and its institutions and small businesses — and it tapped into Lower East Side History Month, too.

The American Sephardi Federation has also helped out with the festival, which is great. This festival has become a unifying event for the remaining Greek and Sephardi Jews in the New York City area, and I’m really proud of that.

It sounds like you definitely do a lot of work with the local Jewish community. I was wondering if you did any work with local Greek Orthodox churches or the Greek Consulate-General?

Yes! First, we work with a historic Greek Orthodox church a few blocks away, St. Barbara — in fact, members of the Greek Jewish community who came after World War II attended Greek school at the church. We reached out last year and they came and sold gifts and jewelry, and they’ll come again this year. We’re also in touch with the Greek Consulate, and Archbishop Demetrios of the Orthodox archdiocese here. The Archbishop grew up in Salonica (Thessaloniki) and attends the annual Holocaust memorial event at the Greek Consulate. He always speaks movingly of his memories of Salonica’s Jews.