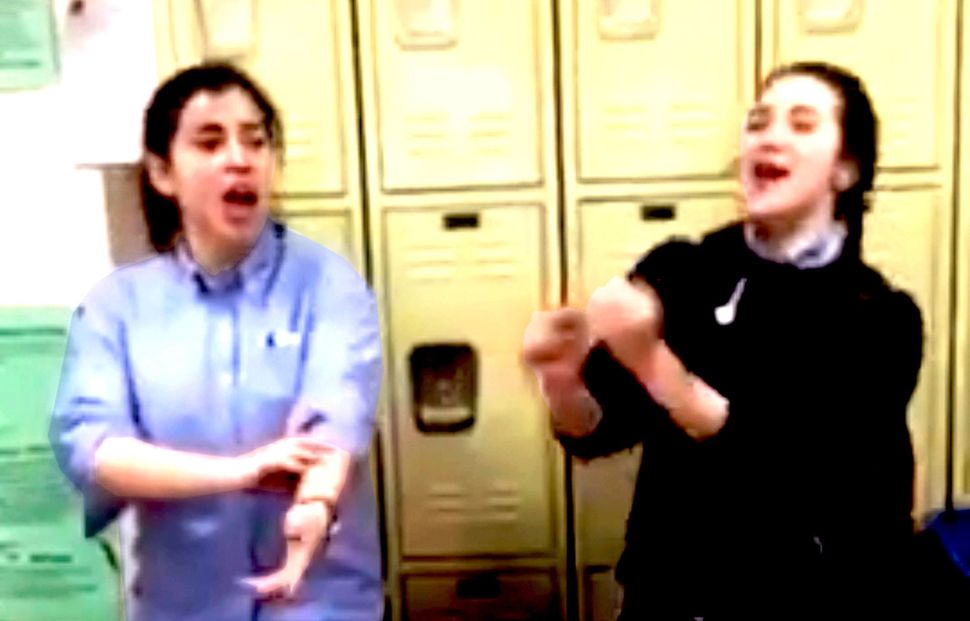 Jewish media outlets were surprised and delighted by a recent viral video of two Bais Yaakov girls rapping about Dor Yesharim, a genetic testing organization. I was delighted, too. Surprised? Not at all.

While there was nothing shocking to me about two Orthodox teenage girls rapping, the responses to the video have been both surprising and dismaying. They betray a prejudiced and inaccurate perception of Orthodoxy in general, and of Orthodox women in particular.

The Forward published an article about the video titled, “Weirdly Talented Rapping Orthodox Girls Star in Illicit Viral Hit.” Why is the reality of Orthodox girls rapping considered weird and illicit? The headline is seemingly using “weird” as a compliment, when it’s really not. “Weird” suggests that there is something off or wrong with what the girls were doing. And the term “illicit” suggests something untoward. But this was not an illicit or verboten act. This was a couple of girls hanging out and having fun at school.

Another article, this onein the Times of Israel, stated, “It goes to show you that you can’t assume that young women wearing long, dark skirts and educated in a sheltered environment don’t know what’s going on in popular mainstream culture.” Seriously? How can anyone think a teenager could grow up in America today and not know what rap is?

These articles expose some real misconceptions about Orthodox girls globally, and about this video in particular, which I would like to dispel.

Reality: They are not. These girls, like Orthodox Jews in general, are committed to tradition while being very much a part of the modern world. They choose religion as the guiding force in their life, but are still attuned to the society and culture around them. Take, for example, the growing number of fashion blogs and clothing labels focusing on modest couture, like Fashion-isha, MyFashionology or MIMU MAXI.

This is not a new revelation or phenomenon. Ayala Fader, in her book “Mitzvah Girls,” found that even in the most insular Hasidic communities, women are rooted in the modern world. In my doctoral dissertation on the history of Bais Yaakov high schools in America, I found myriad evidence of girls’ knowledge of popular culture. Yearbooks were full of references to television, movies and rock music. Yes, they’re Orthodox girls, but they are also American teenagers. It would be very naïve to think these girls aren’t aware of popular culture, and especially of youth culture.

I remember myself, as a teen at an Orthodox girls’ camp over twenty years ago, rapping while rafting down the Delaware river. The rap, made up by two girls on the trip, was an amalgam of modern slang and Yeshivish speak.

Myth #2: These girls are an anomaly and Orthodox girls don’t rap.

Reality: As talented as these girls are — and they are wonderfully talented — they are not unique. Bais Yaakov schools are full of talented girls and school leaders work to cultivate those talents. Bais Yaakov schools commonly have large-scale theatrical productions, artistic displays and extracurricular events like color war. Girls are encouraged in the dramatic arts and in visual arts. Whether for color war or a school Shabbaton, they are often making up songs and skits, serious and comedic, very much like the rap in the video.

In fact, the single-sex milieu of Orthodox education may lend itself more to girls rapping than coeducational environments, where the boys are more likely the ones who would be rapping. In Bais Yaakov schools, girls lead every part of the rich school culture, without the self-consciousness that teenage girls sometimes feel around boys. Stephanie Wellen Levine, in her book “Mystics, Mavericks and Merrymakers,” found that Orthodox students in all-girls schools were able to express their voices, build leadership skills and develop their senses of self, more so than their counterparts in coeducational schools. The Dor Yesharim rappers certainly seem to possess these positive qualities.

Myth #3: These girls are being rebellious.

Reality: They were acting within communal norms. This kind of creative, fun spoofing has been going on for years. Yes, the middle paragraph of the song pokes fun at some of the sacred cows of Orthodox life, like Kollel (married men studying full-time in yeshiva while their wives work to support the family) and large family size. But this kind of good-natured critique is not unusual or unacceptable. This rap reminds me of a song written by Bais Yaakov students in 1983 and published in their yearbook, making fun of all the tzniut (modesty) rules the school had enacted over the past few years:

Similarly, the rapping girls poke fun, but ultimately choose to embrace the values of their Orthodox community. They are not meek, passive dupes of the system. They are engaged participants who are actively choosing to adhere to the Orthodox way of life.

Historically, rap has been a medium through which people can express ideas that are controversial in society. Perhaps, through rap, these girls are addressing and working through some of the challenges faced in their community, expressing concerns that can be difficult to talk about. There is nothing wrong with that. Similarly, when Elana Greenspan, a fabulously talented singer-songwriter, became Orthodox, she detailed the rewards and challenges of that experience in a clever and funny rap, “Fully Halachik with a Beat.”. Rap is also an interesting medium for Orthodox girls. Because it is spoken word and not true singing, it may not be a violation of kol isha (the prohibition of men hearing a woman singing live, which makes it de facto prohibited for a woman to sing in front of men who are not close relatives). Or, to quote Greenspan’s rap, “It ain’t kol isha technically.”

“What goes on in high schools for ultra-Orthodox girls?” the Forward article asked. “Surprisingly good rapping, apparently.” Orthodox girls are creative, talented and introspective. That should not be a surprise.

Leslie Ginsparg Klein is a writer and educator. She teaches Jewish history and education to undergraduate and graduate students and lectures internationally.