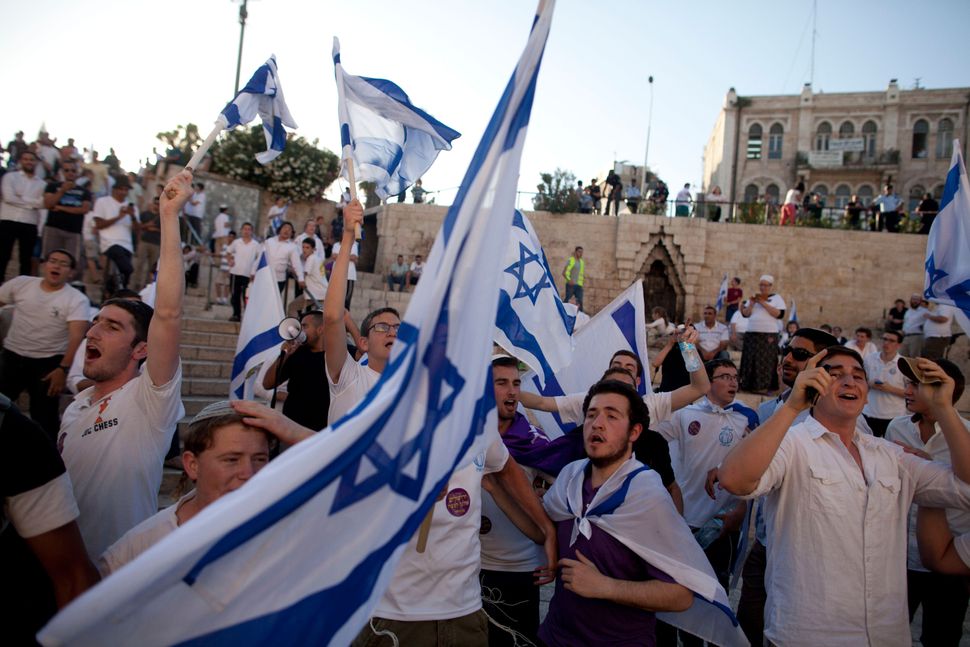 JERUSALEM, ISRAEL – MAY 17: Israelis dance with flags during a march marking Jerusalem Day on May 17, 2015 outside Jerusalem’s old city, Israel. Israel is celebrating the anniversary of the ‘unification’ of Jerusalem, marking 48 years since it captured mainly Arab east Jerusalem during the 1967 Middle East war. (Photo by Lior Mizrahi/Getty Images) Image by Getty Images 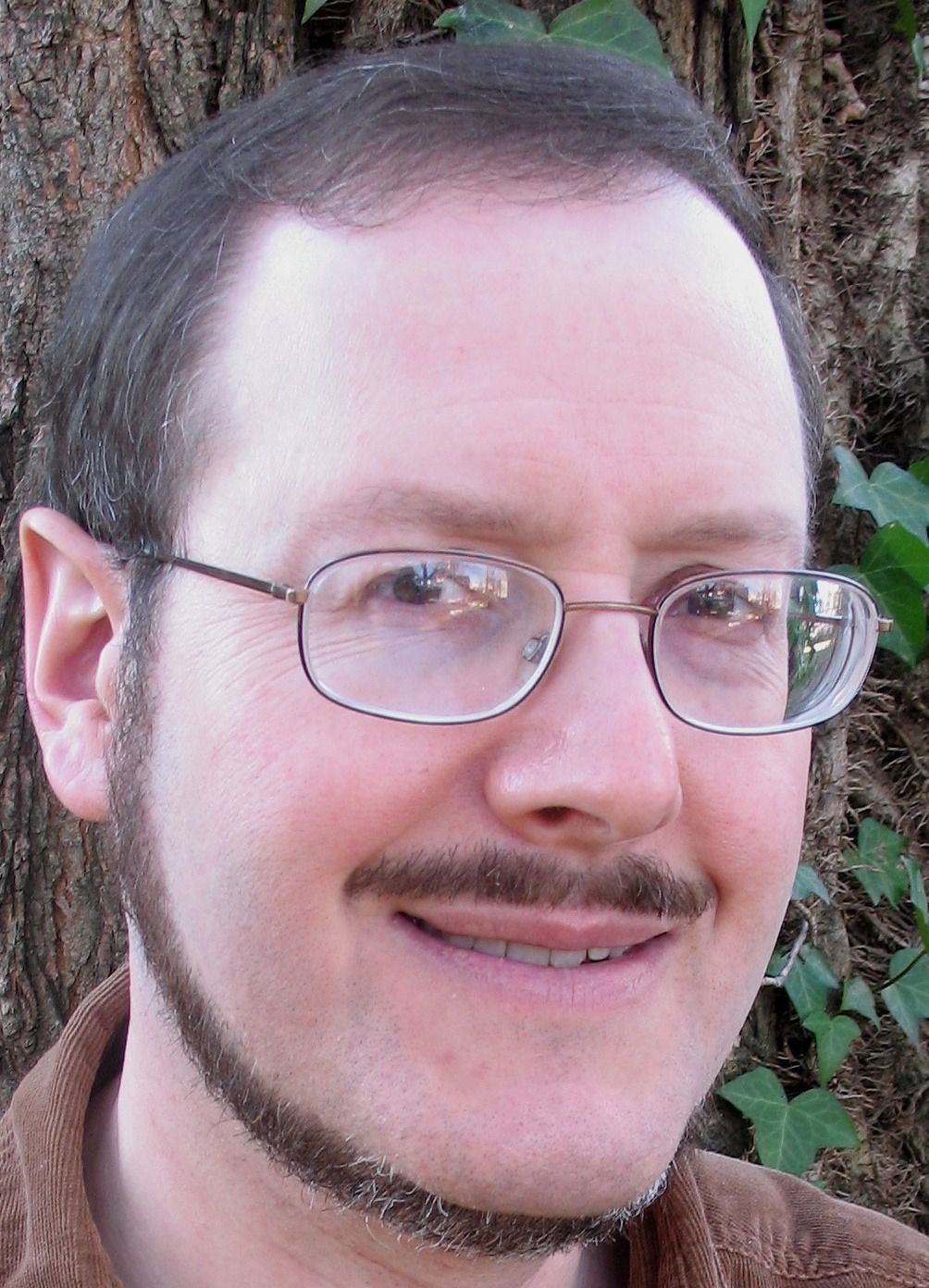 On the eve of the June 1967 war, Rabbi Tzvi Yehudah Kook uttered the audacious (and unwittingly prophetic) lament that Israel did not yet rule over all the former Mandatory Palestine: “Have we forgotten those parts of Eretz Yisrael which are not in our hands? Where is our Jericho? And where is our Hevron? And where is our Shechem? Can we possibly forget them?”

I was 9 years old at the time, religiously unaffiliated and blissfully unaware that a distant government was planning the capture of the West Bank, or that the leading Religious Zionist rabbi — a man who had seen the horrors of the Third Reich — was breathing religious life into new imperial dreams.

Today I’m an Orthodox Jew, a veteran of years of exposure to Talmud and halakhah, with two children who have studied at religious schools in Israel. I know that Talmudic tradition is not the same thing as fundamentalist jingoism of the Pat Robertson variety. I know that rabbis over the centuries have struggled to reconcile ancient texts with scientific fact and with the highest ethical standards.

But “Jerusalem Day,” the anniversary of Israel’s conquest of East Jerusalem in June 1967, pulls me up against a profoundly unsettling aspect of today’s Orthodoxy. For as Rabbi Kook’s example shows, the language of Judaism can be used to sacralize — and to falsify — contemporary politics, with inevitably dangerous results. Access to the holy sites is worth celebrating, but it wasn’t a miracle.

So why don’t Orthodox rabbis warn their followers against looking for miracles in the newspapers?

Precisely because the 1967 war left Israel in occupation of Palestinian territory — an occupation that continues to this day — it’s exactly the sort of historical event that demands careful understanding rather than dogmatic fervor. That’s why I wince whenever I read the entry for 28 Iyar, Jerusalem day (the day the city was reunified in 1967), in Rabbi Eliyahu Kitov’s popular 1979 “Book of Our Heritage.” The following is a typical excerpt:

Two days before [the start of the war]… there had stood surrounding the borders of Israel, all the armies of Egypt, Jordan, Syria and Iraq, which then had nearly two hundred thousand troops supplied by Russia with an arsenal of mighty weapons. In the ears of the whole world they arrogantly declared: “We are set upon destroying the Jewish state and murdering its inhabitants!”

In fact, there’s less evidence that Israel was in any real danger than you’d think. Avraham Sela, of the Shalem Center, has acknowledged that Egypt’s troops “lacked a clear offensive plan” when they deployed in Sinai, and that Egyptian President Nasser’s “defensive instructions explicitly assumed an Israeli first strike.” What’s more, even in the unlikely event that Nasser did attack, “he’s finished,” Mossad chief Meir Amit confidently predicted to Israel’s prime minister, Levi Eshkol. U.S. and Israeli intelligence services “agreed entirely” that Israel would defeat even a simultaneous attack on three fronts in no more than two weeks.

Yet like Rabbi Kook before him, Rabbi Kitov, using biblical tropes of threat and salvation, was prepared to invoke a negligible danger to justify a war of aggression. In fact, his only regret about the “wondrous deliverance” of the war was that Israel’s conquest did not go far enough: “The time of remembrance of ‘the covenant of Avraham’ (‘…from the river of Egypt to the great river, the river Euphrates’) had not yet arrived.” Rabbi Kitov’s deployment of bombastic biblical rhetoric here shows how ill-adivsed it would be to use it, or similar religious rhetoric from Iran, to inform current political or even ethical decisions.

So why, especially on a day celebrating a city holy to all three religions, don’t more rabbis condemn Jewish exploitation of religion as quickly as they condemn extremism among Muslims or Christians? Too many have given a pass to writing like this from Rabbi Meir Soloveichik, in his pithily titled 2003 essay “The Virtue of Hate”:

Archbishop [Desmond] Tutu, who…preaches the importance of forgiveness towards Nazis, has… become one of Israel’s most vocal critics… Perhaps he would have Israelis adopt an attitude of forgiveness towards those who have sworn to destroy the only democracy in the Middle East. Yet forgiveness is precisely what the Israeli government attempted ten years ago, when it argued that the time had come to forget the unspeakable actions of a particular individual [Arafat], and to recognize him as the future leader of a Palestinian state… Now, many hundreds of Jewish victims of suicide bombings later, and fifty years after the Holocaust, the importance and the necessity of Jewish hate has once again been demonstrated.

If you’re going to argue for “the necessity of Jewish hate,” you’d better be sure — at least — that you’ve got your facts right. But in Rabbi Soloveichik’s handling, both religious tradition and the contemporary facts he claims it illuminates dissolve in storm clouds of selective reporting. The Oslo accords were not based on “forgiveness”; the PLO specifically recognized Israel’s right to exist the previous decade, in 1988; and Israel’s militant policy in the second intifada can hardly be described as a way of punishing Arafat, when he himself remained relatively unscathed during Israeli violence in which thousands of Palestinians were killed or maimed in the two years up to the publication of Rabbi Soloveichik’s article.

Treating contemporary Israeli history as the stuff of sermons is a dangerous misuse of Judaism. The simple truth is that no religious book can tell you when a particular political compromise is good or bad, a particular act of violence is justified, or “a particular individual” is or is not beyond redemption. Forget that, and you can find yourself in the moral position of those Southern slaveholders who used to defend their “peculiar institution” with quotations from Genesis and Paul.

I cannot know what medieval rabbis would have thought of the “Jerusalem Day” sermons delivered in countless synagogues these days. But I suspect the idea of scanning headlines for biblical paradigms would have unsettled most of them. They looked backward for religious models — back to the Bible, to the Talmud, to earlier rabbinic commentators. Celebrating “Jerusalem Day” as a religious event turns that approach on its head. It implies moral certainty while begging the most important questions of fact. It pushes what ought to be a legal and political issue outside the bounds of reason. And that was not, and is not, the way of rabbinic Judaism. When today’s Orthodox Jews use religious language to sanctify an event they don’t understand, with consequences they can’t morally justify, they’re not applying tradition — they’re betraying it.

Michael Lesher is a member of Jewish Voice for Peace.