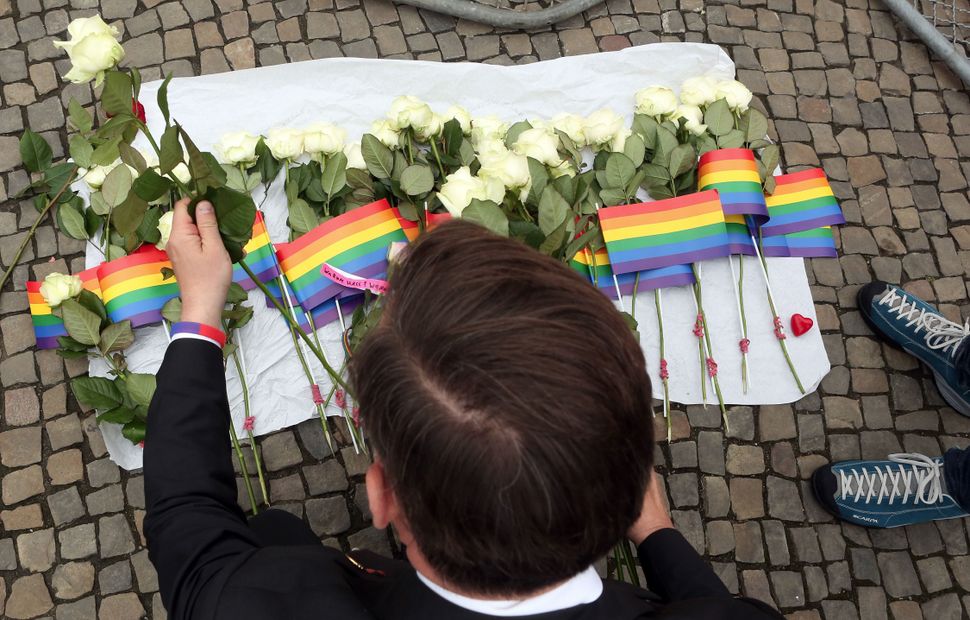 Was the hideous mass shooting at an Orlando, Florida, gay nightclub due to Islamist terrorism, homophobia, mental illness or guns?

All of the above — and that is precisely the problem.

In the short time since the attack — the 49 victims have only just been identified — politicians and pundits of all stripes have re-enacted the tale of the blind men and the elephant, each focusing on part of the phenomenon (in this case, the part they want to see) and conveniently ignoring the rest.

But that’s not how it works. In fact, all four factors were necessary for the worst mass shooting on American soil to take place — and none, alone, is sufficient. The terrorism-spotters are the worst offenders, led, of course, by Donald Trump, who managed to make the mass murder of 49 gay people all about himself. See, The Donald said, I was right about those Muslims. Marco Rubio and other Republicans piled on.

It’s a curious moment when the party that has subjected you to hate and ignorance for decades now adopts you so that it can subject others to hate and ignorance. That being said, the murderer’s twisted version of Islam is obviously part of the story. In part, though not in full, this was indeed an attack on liberal society, and on America, in general. Je Suis Orlando.

But the best analogy to this attack wasn’t the attack on Charlie Hebdo, which, after all, was a strike against journalists who had offended pious Muslims. This was more like the attack on the kosher supermarket in Paris, whose victims’ only crime was being Jewish.

And how offensive would it be, as a Jew, to read tweet after tweet “praying for the victims” and condemning “Islamist terrorism” without a single mention that it was not just any supermarket, but a kosher supermarket, a Jewish supermarket, that had been singled out for attack?

That’s what’s happened here. As my friend Mark Stern noted at Slate, anti-gay politicians from Rubio and Trump to Mike Huckabee and Tom Cotton have not only failed to mention that the attack was against LGBT people, not only supported policies that have led to violence and marginalization against LGBT people, but also cynically exploited my community’s tragedy to their own political ends.

(Alas, even a Haaretz columnist’s analysis of the massacre, republished here, completely omitted that the attack was carried out against gay people at a gay bar. Shame.)

One can almost never draw a straight line from a politician’s biased utterance to a person’s murderous rage. Especially in this case, it’s hard to blame Christian conservatives for the act of a Muslim extremist — even more so because we know that anti-gay messages have recently been preached at Orlando-area mosques.

But no one operates in a vacuum. Anti-Muslim attacks have risen in the wake of the Trump phenomenon. So have anti-Semitic ones. And so, when anti-gay and anti-trans attacks take place, it’s reasonable to look at society in general, and at all those who depict LGBT people as predators, degenerates or worse.

Has anyone noticed the irony, by the way? Republican politicians are spreading lies about transgender people in bathrooms — but it was the anti-LGBT shooter who holed up in a gay club’s bathroom for three hours with dozens of innocent hostages. Indeed, there have been over 100 anti-LGBT bills proposed in states across the country in the last 12 months. Any correlation, do you suppose, between demonizing gays and murdering them?

Not to mention the long, sorry history of violence at gay bars and clubs, which often serve as the only available “safe spaces” for LGBT people.

Of course. This was both an act of Islamist (not Muslim, but Islamist) terrorism and the worst anti-gay violence in American history. Both/and, not either/or.

Mental illness, or at least psychological imbalance, also seemed to have played a role in the Orlando attack. This supposedly anti-American terrorist posed for selfies in NYPD T-shirts and regalia. He was a thug who beat his wife and was prone to fits of rage. Whether he was bipolar or suffered from more serious illness, it’s clear that psychological imbalance was also a necessary, but not sufficient, cause for Sunday morning’s massacre.

(It’s also possible that the attack was deliberately timed for “Latin night” at the club; the overwhelming majority of victims were Latino. If this turns out to have been deliberate, than anti-Latin hatred, too, must be taken into account.)

What can be done about these three causes, though?

For a start, enlisting rather than marginalizing moderate and progressive Muslims, since they are our best allies against extremists. In this regard, race-baiters like Trump are ISIS’s best allies. And our society can and should do more to treat mental illness. And we should have zero tolerance for any public figure who lies about LGBT people — including a majority of North Carolina’s state representatives — for any reason.

Which is what brings us to the fourth necessary condition for Orlando: guns.

Even if the terrorist were radicalized and pledged himself to ISIS, even if he were homophobic, and even if he were mentally ill, the massacre at Pulse would not have happened if he hadn’t so easily obtained a deadly assault rifle that, until ten years ago, was illegal under the Bush-era assault weapons ban.

And that’s something we could do something about, but choose not to.

There is no reason on earth why any civilian should be allowed to own an AR-15 assault rifle, a weapon based on the M-16 that has been used in at least ten mass shootings since 2001, and that has no conceivable hunting or self-defense application. (Assault rifles were also used in the San Bernardino terrorist attack.)

And there is no reason why the federal government can’t even study deaths from guns, as it studies deaths from car accidents.

No reason, of course, except the Republican Party’s fealty to the National Rifle Association and its powerful lobbying and propaganda machines. There is no constitutional issue here; terrorists with AR-15s are the polar opposite of the Second Amendment’s “well-regulated militia.” There is only profit for gun manufacturers, fear-mongering for right-wing opportunists, and political expediency for the Republican party.

In a bitter, tragic irony, the Republicans’ sworn enemy, Islamist terrorists, are quite aware of this. “America is absolutely awash with easily obtainable firearms,” said Al Qaeda spokesman Adam Yahiye Gadah in 2011. “You can go down to a gun show at the local convention center and come away with a fully automatic assault rifle, without a background check, and most likely without having to show an identification card. So what are you waiting for?”

Like Islamism, homophobia and mental illness, our psychotic, phallic, paranoid gun culture was not a sufficient condition for the Orlando massacre. But it was a necessary one. No AR-15, no massacre — not on this scale, anyway. And unlike the other necessary conditions for the massacre, this one could be eliminated almost completely.

So while pious conservatives want us to pray for the victims of this tragedy, they should study the Bible instead. Starting with Genesis 4:10, which screams, “What have you done? Listen! The voice of your brother’s blood cries out from the ground.”