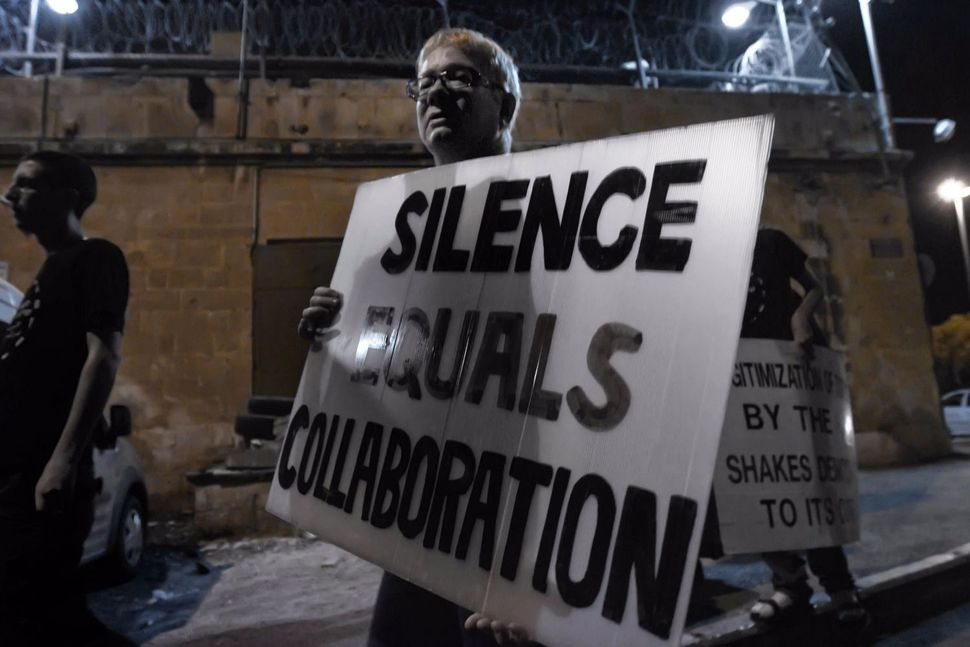 Israel’s parliament, in a dazzling display of perverse logic, managed to shoot itself in the foot on Monday with formal approval of a law that hobbles human-rights organizations.

In fact, NGOs were already required under existing law to make all funding sources public. The new law merely adds the requirement that organizations funded by foreign governments call attention to that fact every time they appear in public. In effect, the goal is to encourage popular hostility toward organizations advocating minority rights by creating the impression that they’re foreign agents.

The law’s supporters have been arguing for years that foreign government funding of Israeli NGOs undermines Israeli democracy by letting other nations subvert Israeli decision-making. Justice Minister Ayelet Shaked of the settler-backed Jewish Home party, the law’s main author, has repeatedly claimed that similar laws exist in other democracies, including the United States, and that no democracy can tolerate foreign governments meddling in their politics.

Prime Minister Benjamin Netanyahu himself, in a Facebook post, wrote that “the purpose of the law is to prevent an absurd situation in which foreign countries interfere in the internal affairs of Israel by financing NGOs while the Israeli public remains unaware of it.”

Leaving aside the irony of Netanyahu railing against foreign governments trying to intervene in Israeli decision-making while tempers are still raw over his spectacular effort last year to intervene in a historic U.S. decision — and leaving aside the fact that the foreign funding was already public knowledge on the NGOs’ websites — the prime minister’s remark is riddled with perverse logic.

For one thing, no government other than Israel’s considers Israel’s conflict with the Palestinians to be a purely internal Israeli matter, any more than Congress’s vote on the Iran deal was a purely internal American matter. In the narrowest sense, the relationship between Israel and the Palestinians of the West Bank and Gaza is considered by every country except Israel to be an international relationship between Israel and another entity beyond its borders. In a larger sense, leaving aside the question of where Israel’s borders are, the conflict has explosive spillover effects worldwide. We live in a global village.

For another thing, government funding of foreign human-rights NGOs has been an honored practice throughout the democratic West for decades. The United States has three separate government-financed foundations — the National Democratic Institute, the International Republican Institute and the parent National Endowment for Democracy — that spend hundreds of millions of American taxpayer dollars annually doing nothing but exporting American notions of democracy to more than 100 countries around the world. They do it both by funding local NGOs and by running their own programs on the ground. Britain, France, Germany and other democracies do the same.

Some target countries welcome the West’s help in strengthening their local democracy. Others hate it and try to outlaw it, notably China, Egypt, Cuba and Iran. Now Israel has, in a tentative way, joined that august club.

A list of 27 organizations that will be affected by the new law was prepared by the Justice Ministry’s registrar of non-profits and submitted on June 1 to the chair of the Knesset’s law and legislation committee, Nissan Slomianski of Jewish Home. Slomianski refused to make it available to the committee’s members, however, noting that the law would apply to any organization receiving substantial foreign government funding and he wanted to keep the debate “clean” of specific organizations or ideologies.

In reality, though, targeting foreign government funding while ignoring private donations is tantamount to targeting the left and giving the right a pass. Left-wing NGOs in Israel focus heavily on Palestinian rights and opposition to settlement expansion. Those priorities dovetail with the policies of nearly the entire world community.

Right-wing NGOs tend to focus heavily on expanding Jewish settlement in the post-1967 areas and enhancing the Jewish identity of state institutions, often at the expense of non-Jewish minorities. Those priorities run counter to the policies of virtually every country except Israel, and are supported instead by private funding from overseas religious sources.

And indeed, the left-wing slant of the target list became clear the day after the committee meeting when the Jerusalem Post obtained a leaked copy of the Justice Ministry list and published a photocopy of the Hebrew original. Haaretz published an English translation of the list (here) a day later.

Of the 27 affected NGOs, 25 are left-leaning organizations that focus variously on broad human and civil rights, Israeli-Arab rights, Palestinian rights in the territories, African refugee and migrant rights and general peace advocacy. The other two appear to be Sephardic Orthodox educational institutions backed by French foundations whose relationship to a foreign government is unclear.

Here’s another irony: A goodly chunk of the targeted organizations’ activities involve taking the government to task for failing to enforce its own laws, whether on settlement construction in unauthorized areas, equal treatment for Israeli Arab citizens or timely processing of refugee applications. The purpose of the new law is to limit efforts by Israeli organizations that seek enforcement of Israeli law. Insisting on the rule of law smacks of leftism these days. (See: Hebron shooter Elor Azarya.)

Despite Slomianski’s demurral at the June 1 committee meeting, he effectively acknowledged the anti-leftist and anti-Palestinian-rights intent of the legislation during the fiery, six-hour Knesset debate preceding the law’s adoption June 11. “Left-wing NGOs finance the Palestinians,” he said during a speech from the rostrum. The remark caused an uproar in which two opposition lawmakers were ejected for accusing him of incitement.

Left-wing organizations targeted by the law have been complaining for months that the law is deliberately crafted to hurt the left while ignoring the very substantial foreign funding of the right. “While the law will de-legitimize left wing organizations, pro-settler NGOs who receive millions of dollars in foreign donations without any transparency will remain unaffected,” the Israeli Peace Now organization said in a statement following the law’s passage Monday.

An earlier version of the bill required NGO representatives to wear special badges every time they visited the Knesset to lobby or testify. That requirement was deleted last spring at Netanyahu’s urging, following protests at home and abroad that the badges were reminiscent of the yellow badges worn by Jews in Nazi Europe.

The bill’s first version (Hebrew text here, my analysis here) submitted to the Knesset in March 2011, would have imposed a 45% tax on foreign government donations to Israeli NGOs that are deemed “political” — that is, critical of government policy. Organizations deemed “dangerous” — those that call for international legal action against Israel or Israeli soldiers or officials — would be barred from receiving foreign funds at all, and the 45% tax would be imposed on their domestic donations. That bill died in committee.

A second version, submitted in March 2015 by the Jewish Home party, would have required all foreign government donations to be approved in advance by the ministers of justice and defense and the Knesset. Organizations receiving unauthorized donations could be shut down. The bill was a condition of Jewish Home joining Netanyahu’s coalition following the March 2015 elections, but the initial draft caused such an international brouhaha that it was withdrawn and radically toned down.

The current version, limited to so-called transparency, was submitted in February 2016 by Justice Minister Ayelet Shaked of Jewish Home.