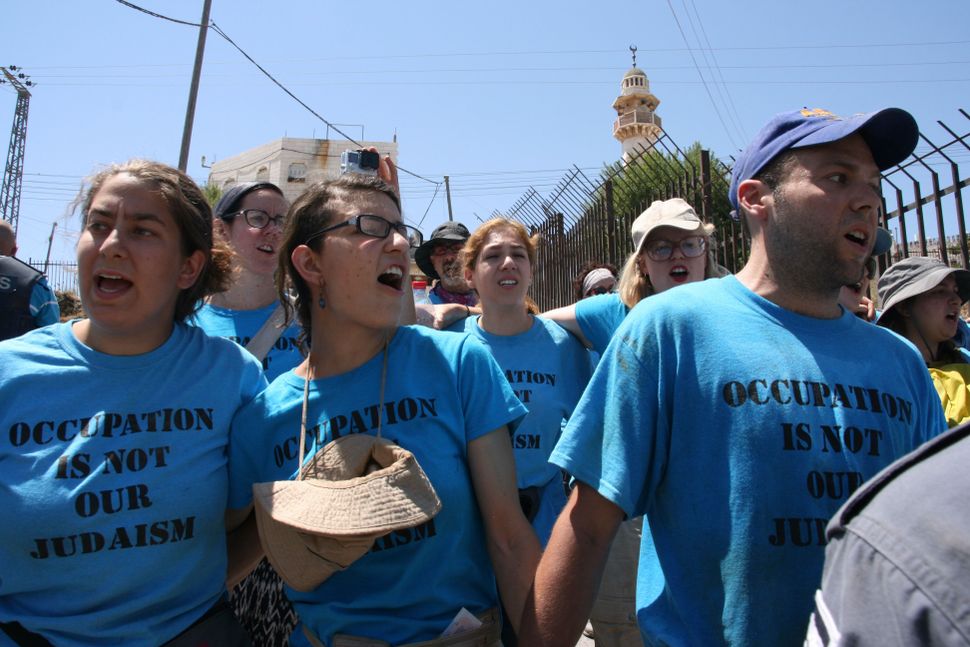 We were about to eat the food we’d been given when the Palestinian detainee was escorted in, blindfolded and handcuffed. The soldiers who brought in the Palestinian placed him on a chair facing the wall. We were sitting around a table, talking and finally starting to get comfortable in our situation. Our bags were still on us, and even our phones were being used not-so-subtly under the table.

“What about him. Doesn’t he get food?” my friend asked the officer.

“He can have some of yours if you want.”

It was shocking to witness the harsh treatment of a Palestinian only a few feet away while we enjoyed privileges based on our status as Jews.

The six of us were Israeli Jews who had been detained in Hebron on Friday for peacefully clearing rubble from a factory in order to create a community cinema, and for refusing to comply with a Closed Military Zone order that the army presented us with to force us to stop working and to leave. Thirty-five of us peacefully protested the order, but it led to the detainment of only six of us.

To be clear, we broke the law, purposefully. We used non-violent resistance, but we still knowingly broke a law. And still the soldiers let us have our bags with us, and our phones. We were given food and had our lawyer present.

By contrast, the Palestinian was detained because he had fireworks in the trunk of his car, left over from a celebration. He was blindfolded and cuffed. No bag, no phone, no lawyer present.

What happened to the other 30 people? The police refused to arrest them because they were American Jews. Soldiers even directed and escorted them to the police station.

It was a stark lesson in privilege. And because of that privilege, we have a responsibility.

We put down our packages of plastic forks and knives and sat in silence. Eventually the soldiers removed the Palestinian man’s blindfold, and when he decided to eat with our encouragement, they also removed the zip tie from around his hands. The soldiers were aware that we were watching and they changed their treatment of the Palestinian accordingly.

It was amazing to realize the power we had to influence the way the system treats a Palestinian while in the same space as us.

This power reflects our broader responsibility to help those whose rights are being violated precisely so that we can hold on to our Jewish privilege. 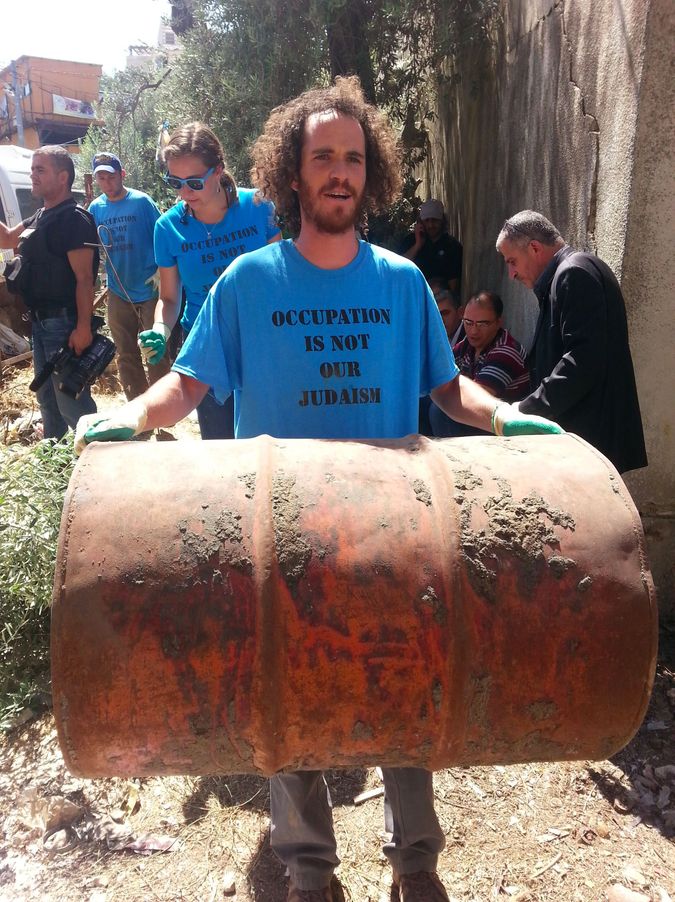 And that’s why we, the All That’s Left collective, in partnership with the Center for Jewish Non-Violence, enthusiastically said yes when we were invited by our local Hebron partners from Youth Against Settlements to transform an unused factory into a theater. Throughout the day, as I witnessed soldiers interact with the property owner in the forms of screams and manipulation, I questioned how I once felt so proud to wear that same military uniform. It amazes me how connected the feeling of pride and shame are, and how acts that used to make me proud can now so strongly evoke in me the opposite feeling. I remember seeing soldiers in their green uniform before I joined the army and wanting so badly to carry that pride they had. When I enlisted, I happily donated my body to the army, and for that I felt proud.

But on Friday, when I witnessed the soldiers ignore requests for medical attention by our Palestinian partner from YAS who was on the ground for 40 minutes, I felt no pride. When I found out that the Palestinian detainee who had joined us had been arrested 20 hours prior and had slept on the ground with his hands tied and blindfolded all because there were fireworks in the trunk of his car, I felt no pride.

I felt an intense and overwhelming amount of shame.

And then I did my absolute best to let go of that feeling of shame, and any feelings of former pride, because those two feelings serve only one person: myself.

Our direct-action of creating a communal space in the form of a cinema reminded me how privileged I am, and how capable I am (we are) of using our bodies in a different way. Instead of using my body and the privilege that comes with it to uphold a system, I can use it to resist that system. In that, I feel neither pride nor shame, but simply a responsibility to use my body and privilege to help dismantle the systems that oppress Palestinians. 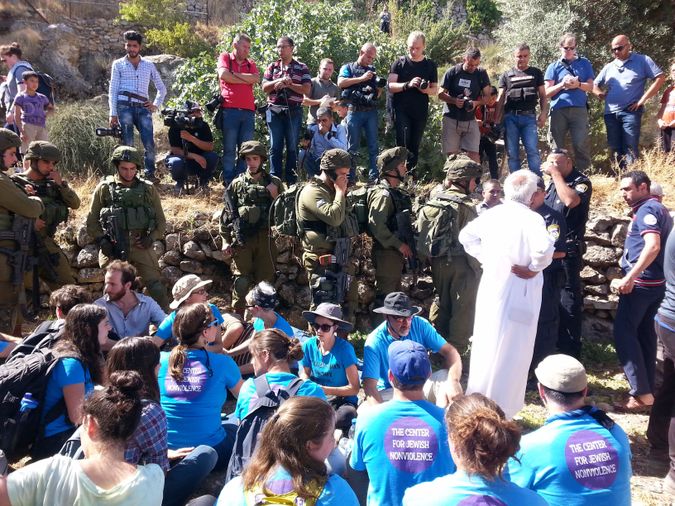 And no, arrest is absolutely not the only way to use your privilege and your body. Showing up when those who are oppressed ask for help is. Youth Against Settlements has enough people in its network to clear out the factory, but Palestinian bodies in occupied Hebron don’t have the right to gather and to work there. Yet we, Jewish Israelis and internationals alike, do.

In a beautiful act of partnership, we, Jews and Palestinians, came together through trust and understanding and made huge strides in creating the first cinema that will stand in Hebron since the 1930s. I had the opportunity to help a community reclaim a small amount of dignity through the renovation of this space. I feel so incredibly humbled that so many who are oppressed in my name would invite me and 60 other Jews to work with them, side by side. And as the one with privilege, it was my responsibility to heed to that call.

The occupation is upheld by the Jewish state, my state, but it will also end with the help of Jews resisting its actions and existence in our names. We as Jews have the responsibility to answer the call of our Palestinian partners and to help end the occupation. In the meantime, we must use our bodies, our eyes and our privileged status to hold our state, society and ourselves accountable. And to help our partners build new spaces, like Cinema Hebron.

Becca Strober is an American-Israeli and is active in anti-occupation movements and queer activism. Follow her on Twitter @beccastrober.