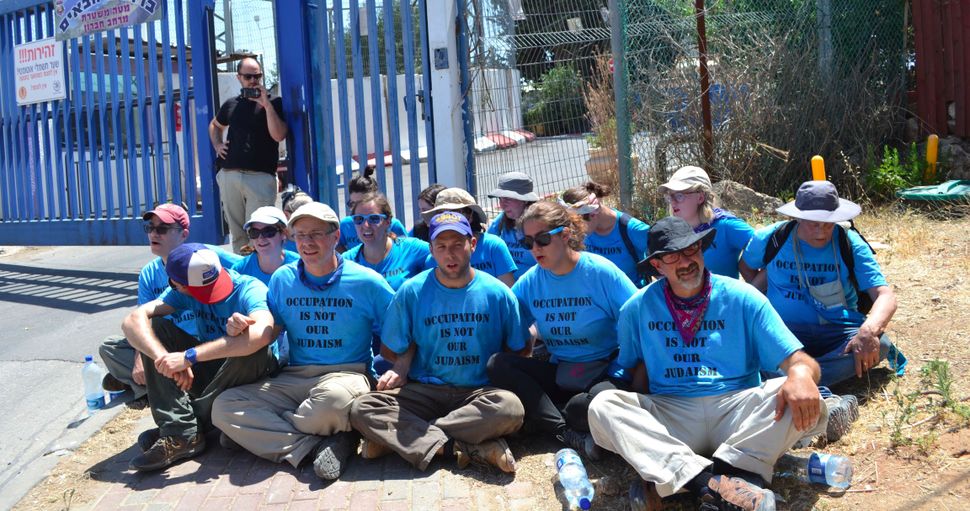 Jewish American activists at a sit-in outside of an Israeli jail in Hebron. Image by Naomi Zeveloff

As their bus rolled toward the Palestinian city of Hebron, American Jewish activists broke into “Olam Chesed Yibaneh,” a Hebrew song about building a world with lovingkindness. Later, facing arrest by Israeli police, they sang “Lo Yisa Goy,” the classic Hebrew summer camp song that warns that “Nation shall not raise a sword against a nation.”

The 45 activists, including liberal Zionist author Peter Beinart, wore shirts that said “Occupation is not Our Judaism.” They were in Hebron to put a Jewish religious spin on the fight against Israel’s military occupation of Palestinian lands. They came as a delegation of the Center for Jewish Non-Violence, a new group that seeks to challenge the Israeli government from an Jewish ethical stance. About 25 activists from other groups, such as the All That’s Left: Anti-Occupation Collective, which also helped plan the day, joined in Hebron.

While the West Bank is a major activist magnet, the Center for Jewish Non-Violence protest was a unique effort because of its Jewish theme. The activists maintained that it was the largest explicitly Jewish direct action in the West Bank in solidarity with Palestinians to date, a reflection of the growing critique of Israel among young Jewish liberals.

In addition to Beinart, the group included another prominent critic in Brant Rosen, the founding rabbi of the non-Zionist Tzedek Chicago synagogue.

“The reason we came was to lift up Palestinian and Israeli non-violent anti-occupation work,” said Ilana Sumka, the head of the Center for Jewish Non-Violence.

Six demonstrators were detained, but they were later released.

Beinart called for direct Jewish action in the West Bank in a 2014 Haaretz column. He likened Jewish protest on behalf of Palestinians to the 1964 “Freedom Summer” when white activists helped register black voters in the south to draw national attention to the oppression of African Americans.

Beinart said that the Center for Jewish Non-Violence activists were not merely using their Jewish identity a “marketing slogan,” but that they felt a true religious impetus to stand with Palestinians.

The group started its day in Bethlehem in the lobby of the Holy Family Hotel, where the activists, most in their 20s and 30s, were staying. They passed around slips of paper with the names and phone numbers of Israeli lawyers to call in case of arrest. Ashley Bohrer, a 27-year-old philosophy professor from Chicago, had helped organize the trip in spite of many of her family members’ disapproval. She said she was there to “dislodge the blind support” of Israel from Jewish institutions.

The day’s unusual main event would be the creation of a makeshift movie theater in a former metal factory in one of the tensest parts of Hebron, where both Jewish settlers and Palestinians live. The idea for “Cinema Hebron” came from the Palestinian activist group Youth Against Settlements, which would be joining the Jewish activists in Hebron. 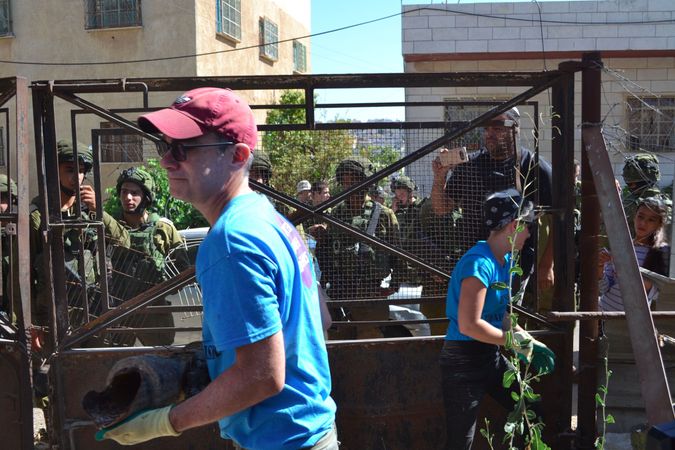 Brant Rosen, a Chicago rabbi, helps clear a yard as an activist project in Hebron, as soldiers and settlers watch. Image by Naomi Zeveloff

Armed with bags of popcorn labeled “Cinema Hebron,” bottles of water and peaches and apples, the Jewish activists divided into three groups: those that were willing to risk arrest, those who were also willing to but didn’t want to be on the front lines, and those who wished to avoid it. Then they piled into several small buses, purposefully divided to avoid looking like the large activist group they were.

As one bus wound through the streets of Bethlehem, 22-year-old Maya Rosen, a soon-to-be senior at Princeton University, talked about the group’s upcoming Friday prayer service in the Palestinian village of Susya. She said her Palestinian host congratulated her with a hearty Hebrew “Kol hakavod,” or “Well done!” when she told him she kept kosher. He is helping her maintain the Sabbath tradition during her stay.

Rosen had joined the delegation with several other college students who raised donations in the traditional increments of $18 — which means “life” in Jewish numerology — to help fund their trip. She said that Israel’s occupation was a “desecration of Judaism and Torah and what it means to be part of this people.”

If the activists were arrested, she said, it would also be a “win” because it would “draw attention to the horrible abuses in Hebron.”

Halfway to Hebron, the activists were alerted that a group of Israelis who had planned to join them were stopped by Israeli soldiers who ordered their bus to turn around.

The American Jews encountered no such obstacles on the road. They made their way to Hebron and through a busy Palestinian market selling pigeons and rabbits to the site of the shuttered metal factory. There were two cinderblock buildings filled with trash and metal scraps, next to a pair of overgrown ancient olive trees.

Mutasem Hashlamoun, an activist with Youth Against Settlements, explained that the buildings were closed along with many other Palestinian businesses after Baruch Goldstein massacred 29 Palestinians in 1994. Now, his group hoped to open a community cinema for Palestinians to gather in.

Another Palestinian man present said that he was happy to have the help of Jewish Americans: “All the time the settlers want to show problems between the Palestinian and Jewish but it’s not a fact.”

It wasn’t long before a eight soldiers in helmets arrived and stood outside a locked fence, watching the Jewish activists clearing the trash. The activists formed an assembly line to pass metal parts and brush from one part of the yard to another, singing loudly: “Woke up this morning with my mind set on freedom!”

“Thanks for cleaning the Jewish property!” one elderly settler shouted. “We will build here!”

Another settler, Tzipi Schlissel, said she was outraged at the Cinema Hebron effort, claiming that Palestinian terrorists were duping the activists into supporting their “jihadist” aims. Schlissel’s father Shlomo Ben Ra’anan, a prominent settler rabbi, was killed by a Palestinian in 1998.

She said it was “very hard” to see Jewish activists for Palestinian rights, but she wasn’t surprised. “Jews during the Holocaust helped Hitler too.”

Mid morning, the group received word that the Israeli police were going to declare the yard a closed military zone. The activists who wanted to avoid arrest slipped away while the ones who were willing to do it sat down cross-legged on the grass. A policeman arrived. “This is an illegal gathering,” he said. He gave them two minutes to leave, warning them he would use force if he had to.

Soldiers lifted the activists from the ground one by one and directed them up a steep stone path as they chanted a Hebrew song, leaving behind the incomplete cinema. Six activists with Israeli citizenship were detained.

The group spent the rest of the afternoon trying to get to the jail to find their friends, but were stopped by soldiers along the way. When they tried to argue, soldiers reprimanded them. “This is not a dialogue.”

One activist has a message for the soldiers: “We’re from the Center for Jewish Non-Violence. Look it up.”