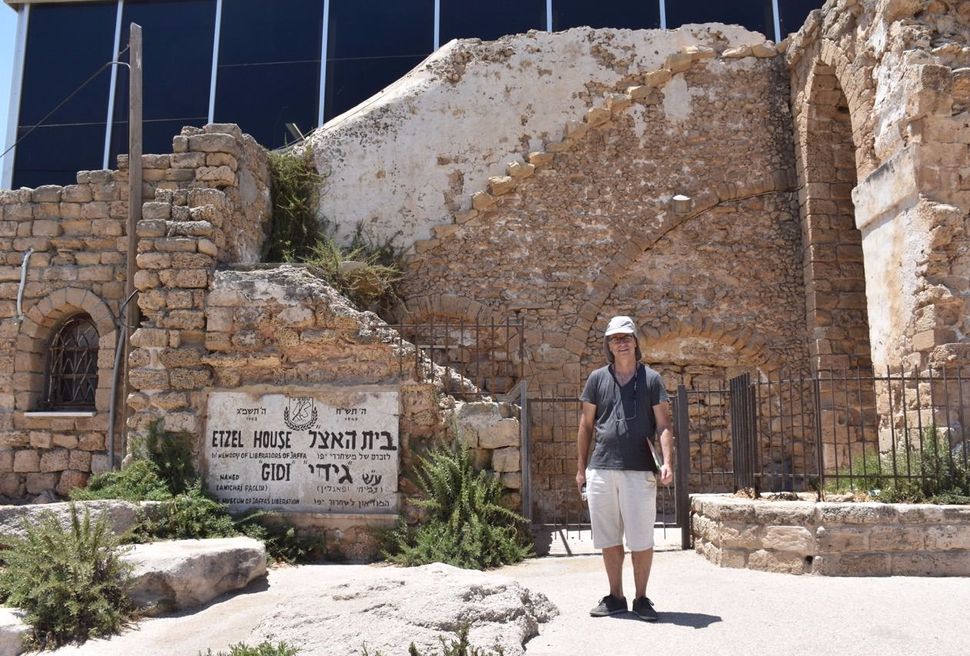 Tel Aviv residents are often described as living in a “bubble,” because of their relative distance from the epicenter of conflict and occupation, and because, at least compared to Jerusalem, the zeitgeist of the city tends toward liberalism and open-mindedness.

But despite all the talk about Tel Aviv’s insulated status, this “first Hebrew city” is very politically saturated — if you look underneath it. I’m thinking of the eight Palestinian villages whose traces, post-1948, are just barely visible beneath the bustling urban center that this place has become. What remains of these villages, whose remnants were absorbed by Tel Aviv’s municipality as the city expanded after the war, and what remains to be done?

I recently toured the remnants of four of these villages with Eitan Bronstein, a founder of the Israeli NGO Zochrot; Bronstein has since left Zochrot to found another NGO called De-Colonizer. Both Zochrot and De-Colonizer try to help Israeli Jews become more aware of Palestinian history. Zochrot is a feminized form of the word “remember,” and De-Colonizer’s stated aim is to “struggle against history’s oblivion and suppressed memories, to finally envision…[an] equal shared life and a peaceful cohabitation.”

We began our tour along the southern part of Tel Aviv’s coastline, at the site of what is now the Etzel Museum, an institution devoted to commemorating losses suffered, and battles fought, by the right-wing pre-state Jewish paramilitary organization. Beautifully renovated, this structure was once part of the Palestinian village of al-Manshiyyah.

Then we went on to the Palestinian village of Sumail, whose remains sit near the intersection of what are today Arolozorov and Ibn Gvirol streets. From there, we continued to Jamasin al-Gharbi, now known as Giv’at Amal Gimel. 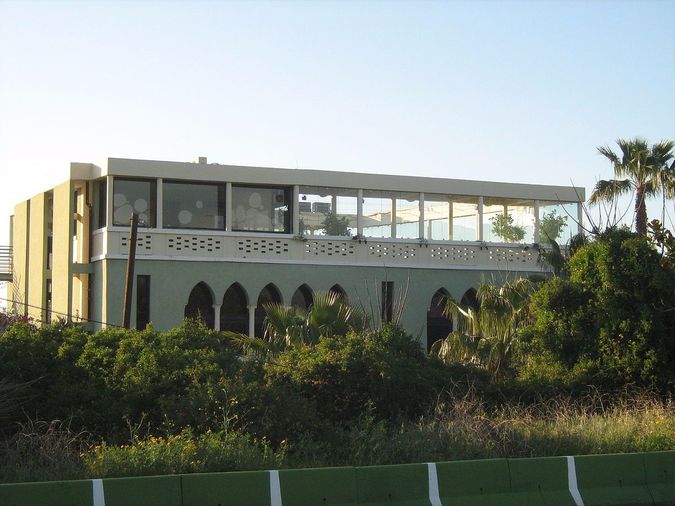 Finally, we ended up at Al-Shaykh Muwannis, which abuts the campus of Tel Aviv University. There, down the road from a large building that was once part of the Palestinian village and is now a faculty club known as the Green Villa (Habayit Hayarok), a cemetery stands as one of the village’s only remnants.

In a tragic mix of geopolitics, social class and urban planning, Sumail and Jamasin al-Gharbi have become sites of contestation between Jewish residents deemed squatters by the state and private developers seeking to evict them. Jamasin al-Gharbi now hosts a growing luxury condo development known as Park Tzameret. When we visited, the remaining residents had penned Hebrew phrases on the corrugated metal walls, in protest: “This was my home, with a garden and a chicken coop. It was yours, it was mine, it was ours” — lyrics to a Hebrew folk song.

Ironically, in this Jew-versus-Jew fight, few may realize that the place they’re battling over used to be someone else’s home, garden or chicken coop. It was once a Palestinian village.

Over in Sumail, an abandoned car stood in tall grass, spray-painted with the Jewish residents’ demands: “[No] evacuation [without] compensation.” In the early 1950s, these villages-cum-neighborhoods were used to house new Mizrahi arrivals, who apparently never earned proper title to their properties — a dynamic that critics have charged was laden with ethnic discrimination. Now developers, along with the city, have other plans for the area. The losers, of course, are the residents who lack the proper paperwork.

Again, here are disadvantaged Jewish residents, understandably unhappy about forced evacuation — and possibly unaware that their residence there is tied to the prior evacuation of Palestinians. 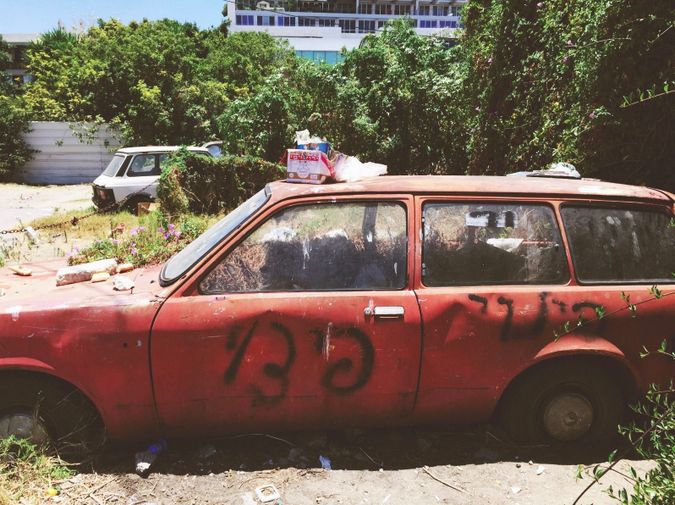 Demands: ‘No evacuation without compensation.’ Image by Mira Sucharov

There’s a sad poignancy to these layers of dispossession, mixed in with competing national and ethnic claims. Some might say that the dispossession that happened in the course of the 1948 fighting was noble enough, because it happened in the name of state-building; at least, it’s nobler than the dispossession happening now in the name of accumulating private capital and stuffing municipal coffers. Maybe, but I’m not so sure. At least those who are being evicted from their homes today have a government to turn to, even if that government is blind to their suffering.

When it comes to the future of the area, Bronstein believes that a “Jewish state” is a “recipe for eternal war.” Instead, he told me that he seeks a “regime that ensures full equality between the sea and the river to all Israelis and Palestinians, including the refugees who wish to return.” On the issue of return, Bronstein was careful to add that he is opposed to “forced displacement.”

And the kicker: “We [at De-Colonizer] don’t see a fundamental difference between Israelis living in Tel Aviv or in Ariel. They are all settlers.”

It’s a bracing statement that will fall hard on the ears of those who seek to defend Israel within the Green Line, at least. But there are many voices, alongside Bronstein’s more strident line, seeking to radically rethink the structure of Israeli-Palestinian relations. And these voices are not necessarily hostile to Israel, as conventionally understood.

I’m thinking of people like Shulem Deen, who, though he did not directly address the refugee issue, wrote in these pages that “Israel need be neither Jewish nor Arab but a state of all its citizens.” Or former speaker of the Knesset and former Jewish Agency chairman Avraham Burg’s vision of two states living in “confederation,” so that we get rid of the notion that “we are here, they are there.” Or Dahlia Scheindlin and Dov Waxman’s advancement of a “confederal approach,” whereby Jews and Palestinians would live freely on either side of an open border, with citizenship and residency decoupled. To wit: “Palestinian refugees who wish to return could live in Israel as residents, but would exercise their full citizenship rights, such as voting in national elections, in Palestine.”

Even Bronstein, committed as he is to radical restructuring, recognizes that all the “practicalities” will “have to be negotiated.” Those “practicalities” include the question of whether the Palestinians who used to live in those villages should be allowed to return to live in Tel Aviv or its surroundings, or elsewhere in what is now Israel. We know that in the Taba talks of 2001, actual figures for refugee return — though they were modest — were introduced into the negotiations. The process, no doubt, will be a tough one of accusation and recrimination, grandstanding and logrolling, as each side starts from a different premise.

In the meantime, as we urge the parties back to the table to discuss refugee return — an issue that should not be beyond the realm of negotiation — we must, at the very least, start to see, listen and remember. Underneath this pulsing, stylish, gritty and contemporary “Hebrew city,” Palestinian history is waiting to be rediscovered.