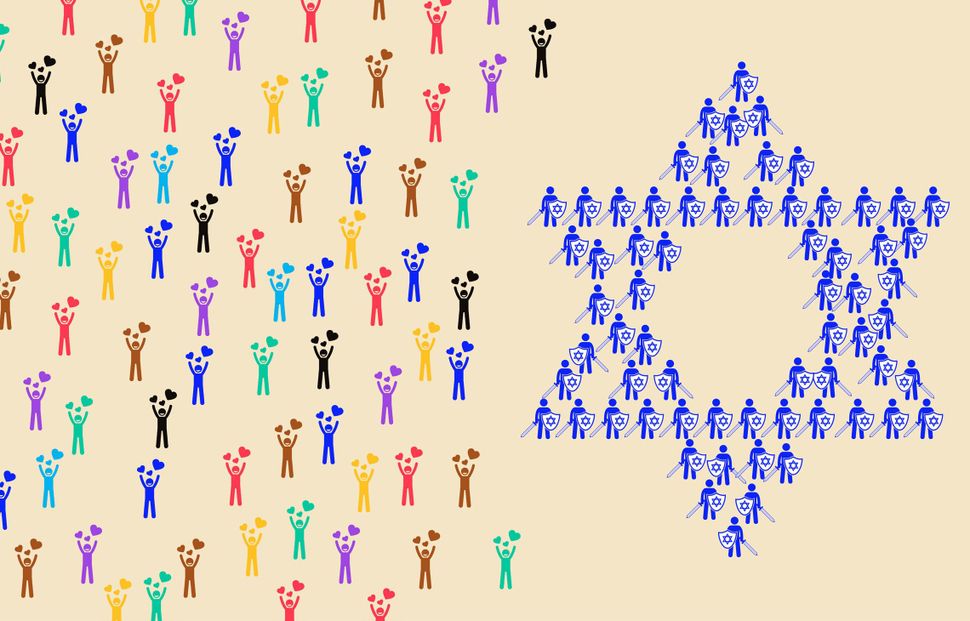 Last November, on tour for my book, I gave a talk at a temple in Cleveland, after which a man raised his hand: “What are your thoughts on Israel?” I hadn’t come to speak about Israel, so I kept my response brief. “I am not a Zionist,” I said. “And I don’t fetishize the idea of Jewish sovereignty, anywhere.”

Later, I wondered if that was the best way to put it. What I had meant was, I’m American, not Israeli, and to me, Israel is just another country. Like Norway. Or Brazil. I like it well enough, but I don’t need it to be Jewish.

The next day, I got an email from a man in the audience. “Your story is compelling,” he wrote me, “but people were turned off by your position on Israel.”

I assumed the “people” referred primarily to himself, but still, it struck me: This man was not bothered by my conventional heresies; he was not troubled by my faithlessness, my lack of religious observance, my belief in no deities, my scarcely finding value in Judaism at all. He was not bothered that I could not say, when asked, what my “spiritual life” was like. Only my non-Zionism turned him off.

In my travels across the country over the past year, in speaking to different Jewish communities, I have had a number of such encounters, receiving little to no opprobrium for forsaking religious faith, but getting looks of consternation when confessing to being “not a Zionist.” It is, apparently, the one heresy left among mainstream American Jews.

I’ve been told that my non-Zionism must be due to my sheltered upbringing: While I was able, with little formal education, to read myself into not one but two careers (first computer programming and later writing), a basic history of Zionism, some appeared to say, was probably too far from my reach. “Perhaps you’d consider learning more about Israel,” the man from Cleveland wrote me. It felt pointless to tell him about the years I spent at the public library reading nothing but.

On reflection, it is not quite true that Israel is, to me, no different from Norway or Brazil. For one thing, I have never visited either of the latter, but have been to Israel, where I have many relatives and friends, nearly a dozen times. It is where over a third of the world’s Jews now live, with whom I feel an instinctive kinship. I have little respect for Israel’s government; its political leaders often strike me as infuriatingly myopic (not to mention, lately, impolitic in their insulting treatment of this country’s president), but as a Jew, I cannot help but feel connected to Israel — the land, the people, the history — even if not to its institutions of state, and to the ideological basis for its existence.

I think about this especially in this month of Iyar, with the sequence of Israeli holidays commemorating Israel’s independence and those fallen in its wars — Yom Hazikaron and Yom Ha’atzmaut — and I wonder about this Israel-schizophrenia of mine. I feel connected to Israel, yet distanced from it at the same time.

As a Jew, I feel enormous pride in what Israel has achieved. When I visit Israel, I feel, if not so enthusiastically, “Home!” (the sentiment of so many Facebook friends when their El-Al flights touch down), at least like I’m visiting favorite relatives. I love the sights and sounds of Jerusalem’s Old City, where my mother lives, and feel the tingles anew each time I see the city’s old walls. I love the scattered remnants of antiquity across the land, providing a tactile connection to history: the stones of the Kotel, the ruins of Masada; even the topology invokes the ancients — the Judean desert, the hills of Jerusalem, the Mediterranean coast. It was all there then. It’s all here now.

It’s also the people. I am not inured to the unique charms (as I choose to see it) of the Israeli taxi driver. I feel oddly connected to Israeli culture, even if I visit only sporadically. I don’t watch a lot of film or TV, but when I do, it is often Israeli rather than American. The only DVD box-set I’ve ever purchased is of BeTipul, the hit Israeli TV series about a psychotherapist and his clients. At present, I find the ingenious comedy sketch show HaYehudim Baim — “The Jews Are Coming” — equalled by nothing on American TV.

When Israel is under attack, I am infuriated by those who remain apathetic but who awaken indignantly only when Israel strikes back. On most days, I think the boycott, divestment and sanctions movement is vile, infested with hatred and bent on Israel’s destruction. I am alarmed by the clear strains of anti-Semitism in much of anti-Zionist and anti-Israel rhetoric.

In a word, I am an Isra-phile. But I am not a Zionist. I love Israel like I love a good falafel: nonideologically. Not because I must — I simply do.

It is a lonely place, though. My friends who were raised among mainstream American Jews often declare themselves Zionists casually, in the way one might be a fan of democracy. What’s to object? They wonder. While I wonder what they find in Zionism so compelling, so obvious, and what makes me so uneasy about it. Have I simply been spared the indoctrination, raised, as I was, among the ultra-Orthodox? Would a Birthright trip have helped?

It came to me on a recent evening, in conversation with a new friend. We’d been acquainted online, and she was visiting from the West Coast, and we met up for drinks. The subject of Israel came up. She loved Israel, she said. I said I did, too, but it was clear she loved it more.

“You a Zionist?” I asked. I was teasing, amused by her earnestness. The answer was obvious.

What followed was an argument, friendly, playful, but illuminating.

Because Jews need one place they can run to in time of danger, of course.

“Imagine a world in which Jews don’t need such a place, a world in which there is no danger,” I suggested. “Just imagine it. Fantasize it. Would we still need Israel then? A Jewish Israel?”

She thought for the briefest of moments, then said, “I just can’t give up Israel.”

And there it was, the reason for my unease.

Zionism dreams of a utopia: Jews in their own land, secure and prosperous, in peace with their neighbors, a nation among the nations — a place for every Jew to run to in time of danger.

A utopian future stuck in a nightmare of history. It imagines a world in which Jews are always threatened, and so it insists on an ethno-religious homogeneity that we no longer accept in Western liberal democracies. It is a particularist’s dream, stirring only to those who cannot think beyond the bleakness of the past and the ongoing daily alarm bells, ignoring the dangers of where such a dream might lead.

A true utopia, if Zionism were to dream big enough, would be one in which ethnic and religious strife has ceased, and Israel need be neither Jewish nor Arab but a state of all its citizens, when Jerusalem, like New York City or Toronto, belongs to no particular group but is free and open to all. An inspiring Zionism would be only a means to an end: creating, in a region rife with sectarianism, a state in which no ethno-religious group is privileged over another.

Yes, it is a fantasy, a dream, but Zionism has always been about a dream, and if it is to dream, it can dream bigger and better. And this, I explained to my friend that night, is why I am not a Zionist.

But she only shook her head and smiled: “I can’t give up Israel.”

A Jewish flag, a Jewish anthem, a Jewish calendar, a Jewish refuge. Others will be given rights, too, yes. A benevolent Dhimmitude — to borrow a regionalism. A utopia for Jews, mere tolerance for others. A dream of the future that in its grandest form cannot conceive of a world without hatred, or its own tribal interests.

This is not a utopia I dream of.

Call me a heretic for that, if you must.