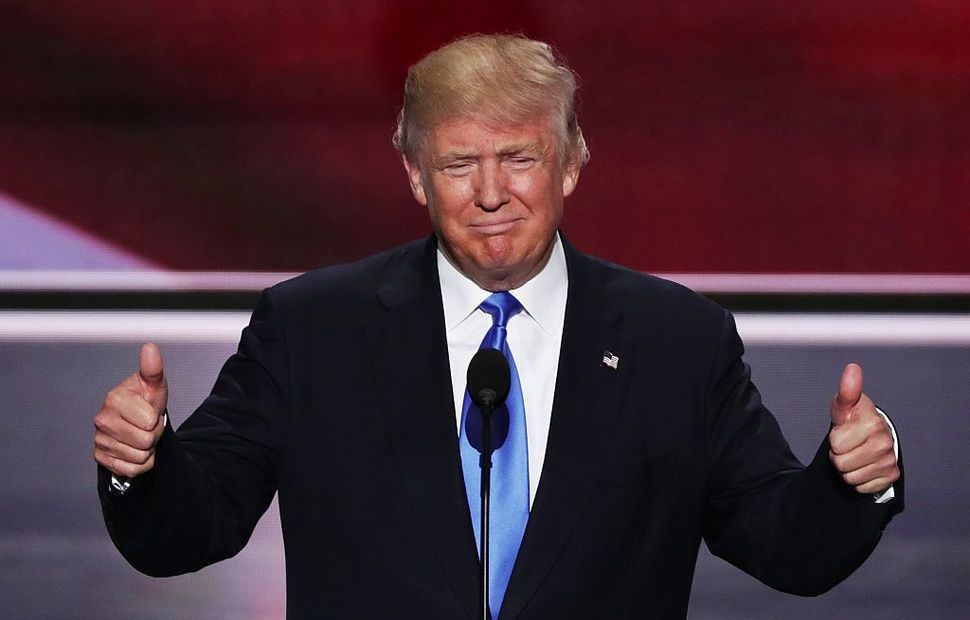 Unless you’re in the fortunate position of living under a rock, you’ve heard by now about the seemingly endless parade of offensive acts that defined the first days of the Republican National Convention in Cleveland. From Congressman Steve King’s blatant white supremacy to Melania Trump’s blatant rip-off of a 2008 Michelle Obama speech to the unauthorized use of a gay icon’s song by a party with one of the most blatantly anti-LGBTQ platforms in recent memory, the RNC has been chock-full of highly unsubtle examples of highly problematic behavior.

Examples of anti-Semitism? Oh yeah, there are plenty of those, too.

The RNC, in an attempt to reach the wider public, decided to host a livestream through which viewers could watch the convention and comment in real time. One of the broadcasted speeches was given by former Hawaii governor Linda Lingle. She spoke of the inroads Republicans have made with Jewish voters and of Republican support for Israel — in and of itself a problematic conflation.

But the real barrage of ugliness came when the feed was flooded with anti-Semitic chatter from the alt-right. Messages like “Press H for Hitler,” “Ban Jews,” and “(((KYKE)))” poured in, seemingly in response to Lingle’s mention of Jewish people. Trump staffers eventually noticed the hate speech and shut down the chat function of the feed.

This is a troubling indication of the sorts of people who rally behind Trump, and of Trump’s implicit endorsement of them in his refusal to come out against their actions.

Jason Greenblatt, a longtime Trump advisor and employee, was quick to issue a public statement voiding Trump of responsibility for the anti-Semitic comments, alleging that Trump “has come out clearly against anti-Semitism.” It’s a claim he’s made before, including in these pages. But not all Jews agree — including the Jew currently writing these words.

Arguably, Greenblatt’s view is clouded by his close association with Trump, because an actual look at Trump’s actual response to the virulent anti-Semitism espoused by some of his supporters paints a different picture. His hesitance to denounce David Duke, the former Grand Wizard of the KKK, is contemptible, and it shows he’s more than willing to throw Jews under the bus by accepting support from anti-Semites.

An even more damning example is his refusal to denounce the actions of his anti-Semitic supporters when they attacked and continue to attack Trump-covering Jewish journalists, such as The Daily Beast’s Gideon Resnick, The New York Times’ Jonathan Weisman, and Politico’s Julia Ioffe.

When Wolf Blitzer confronted Trump about the attacks on Ioffe, which included horrifying Holocaust imagery and death threats and which were the direct result of Trump’s displeasure about a piece she wrote about his wife, Trump refused to take the opportunity to denounce the attacks. Instead, he stated that he doesn’t “have a message to the fans,” and, adding insult to injury, turned the attacks back on Ioffe and the “inaccuracy” of her article.

But here’s the thing: Neo-Nazis and anti-Semites have publicly stated that they actively interpret Trump’s silence as an endorsement.

After the Blitzer interview, Andrew Anglin, the founder of the neo-Nazi website Daily Stormer, wrote glowingly of the refusal of “Glorious Leader Donald Trump” to “denounce Stormer Troll Army,” stating that the group “supports Trump because he is the savior of the White race, sent by God to free us from the shackles of the Jew occupation and establish a 1000 year Reich.”

In the face of such obvious anti-Semitism and such obvious interpretation of silence as complicity, it’s horrifying that Trump has yet to publicly address and condemn anti-Semitism among his supporters. A good place to start would be coming out against the most recent spate of anti-Jewish hatred on the YouTube feed. But if Trump’s track record of condemning (or, rather, refusing to condemn) anti-Semitism is any indication, we won’t see that statement anytime soon.