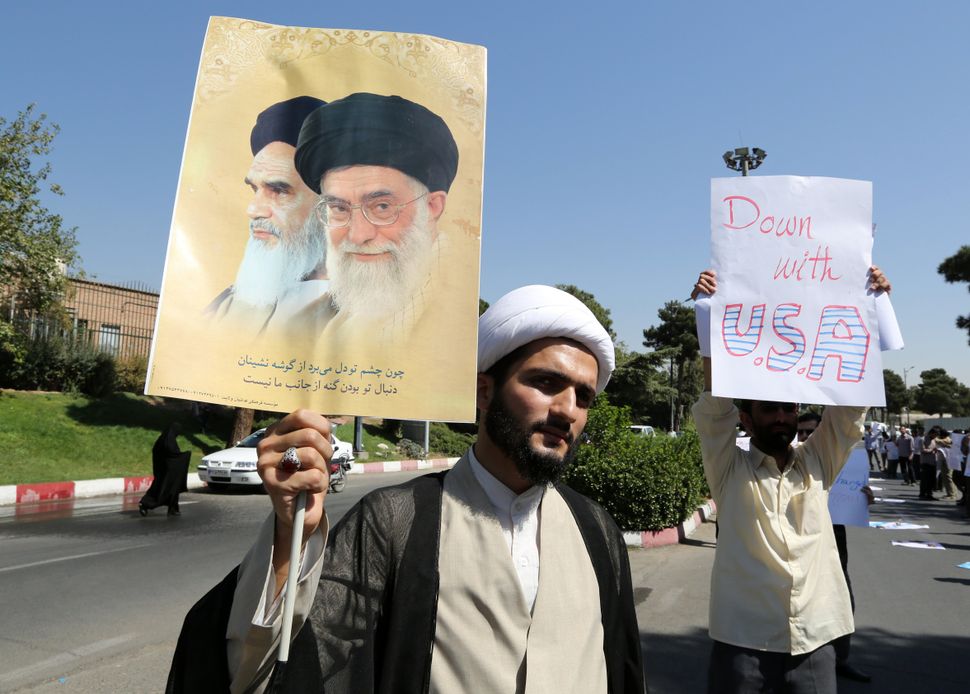 A crazy, cunning man named Max is terrorizing your town. Max — who likes to go by “Supreme Leader” — has a long history of violent assaults, extortion and robbery. He’s been jailed, fined, publicly humiliated. But with a winning smile and an uncanny ability to sound reasonable, he manages to recruit followers who are as violent, if not as clever, as himself.

One day, the town decides it’s had enough. A combination of criminal investigations and civil suits bears down on Max. Feeling the heat and strapped for cash, he makes his gambit. He starts talking about buying a military-grade assault rifle. He stockpiles ammunition. He spends time at the range. He is seen in the darker parts of Wal-Mart.

Terrified, the mayor and police chief call him in for a chat. They ask him, “What do you need in order to not get that rifle?” He flashes his golden smile. “$10 million. Change the laws so I can do what I want. Affirm my right to have a rifle for peaceful purposes. Let me keep my goons and some of my bullets. Do all that — and I’ll put off the rifle thing for a couple of years.”

This is the structure of the deal arrived at a year ago between the six most influential world powers and the Islamic Republic of Iran. With the deal, known as the JCPOA, a terror-supporting, expansionist regime — the puppet-master of war criminals and flagrant violator of human rights and nuclear treaties and Security Council resolutions — has successfully shaken down the powers of the world, securing a massive commitment of cash, legitimacy and arms in exchange for an unsigned promise to put off its nuclear bomb for a decade.

Some ideas are bad ideas no matter how many cutely coiffed experts or slippery diplomats tell you otherwise. Like the mayor’s promises to Max, the Iran deal is self-evidently misguided to anyone who knows the history, the incentives and the way regimes like Iran’s work.

And yet a year later, Iran-deal supporters are awash in self-congratulation. They continue to insist that “smart diplomacy works” and that “we’ve cut off all pathways to the bomb.” They cite short-term threat assessments, quantities of enriched uranium and numbers of centrifuges halted as proof that things are going spinningly.

They’re not. Even on the nuclear issues, Iran keeps scouring for new technology to make a bomb — as a recent German intelligence report showed. It keeps developing ballistic missiles, which, we are to believe, are meant solely for delivering kebobs to your table faster than an Amazon drone.

But questions of compliance were never central to the criticism of the JCPOA. To those who bothered to listen, rather than just “discourse the [expletive] out of this,” as Deputy National Security Adviser for Strategic Communications Ben Rhodes put it, the biggest concerns had to do with a broader context of the vast empowerment of a historically bad actor. The arguments in the deal’s defense, on the other hand, continue to sound like year-old echo-chamber prattle, to which we’ve grown so inured that we have fallen silent while the Middle East reels against the most evil empire on Earth, Europe faces its greatest upheaval in generations because of millions of refugees created by Iran’s favorite proxy, and the United States berates its allies for protesting while it plots to keep Bashar al-Assad in power instead of ending the nightmare.

It can never be said enough: Assad, the greatest war criminal of the 21st century, whose efforts at self-preservation have destroyed a whole nation, is a poodle to the Iranian regime, and has been for a long time. And from what we now know, American flip-floppery about his removal was nothing like the act of baffling incompetence that it initially seemed; rather, it was a sincere effort to keep Assad’s masters in Tehran at the table. The humanitarian cost of this policy beggars belief.

As for Iran itself, virtually everything bad about the regime has gotten worse. Its mainsail hoisted, Tehran has ramped up its jailing and execution of women who’ve been raped, of gay people, of dissidents; has continued, through its proxies, the wars in Syria and Yemen; deepened its hold on Iraq; poured advanced weapons into southern Lebanon to threaten Israel, and launched a campaign to destabilize Bahrain. It has responded to continued nonnuclear sanctions by bombing the banks that enforce them. Yet all these are drowned out by the sucking sound of American influence draining from the region.

As Iran has marched forward, the United States has acted like a starving vegan at a butcher shop: All options disgust, all decisions are half-hearted. The White House has little leverage to get Congress or state legislatures to lift other sanctions or stop new ones. The secretary of state racks up mileage trying to get businesses to invest in Iran, while his own State Department reminds us that Iran continues to be the world’s leading sponsor of terror.

Meanwhile, the discovery of new lies made in defense of the deal has turned into a Pokémon Go-style adventure game for Washington, D.C., reporters. The “most intrusive inspections ever” were actually a front for Iranian self-inspection at key sites; the deal that’s supposed to be “only about the nuclear issue” includes lifting the conventional arms embargo and, apparently, non-enforcement of nonnuclear sanctions and telling everybody that Iran is “open for business.” And the “moderates” the deal was supposed to empower have suddenly given way to the hard-liners, for the simple reason that there never really were two camps to begin with. This, too, was a product of Rhodes’s ingenious Iransplaining machine: The real moderates, it turns out, are all in jail or exiled or dead.

But none of this would matter quite so much if the inherent logic of the deal made sense for American interests or for the world. That we’ve spent very little time talking about that simple question is a credit to the magic of modern media manipulation and the American passion for distraction.

Max may or may not have stopped accumulating bullets. But in the meantime, he’s definitely grown a lot stronger. His crimes are worse, and he now has momentum: People in town either join with him or feel like it’s just not worth fighting if their own leaders won’t do anything. And every time someone calls him on it, all he can talk about is that damned assault rifle. “You know,” he chides them, “I can still buy it anytime I want.”

And when the mayor is asked about all the old investigations and punishments, he tells us that they really were meant just to bring Max to the table. “But this deal,” the mayor reminds us, “has cut off all pathways to that rifle. The world is a safer place.”

And anyone who questions that wisdom is weirdly smeared as a warmonger, an Israel-firster or — heaven forbid — a right-winger.

David Hazony is the editor of TheTower.org and the managing director of The Israel Project. Follow him on Twitter @davidhazony