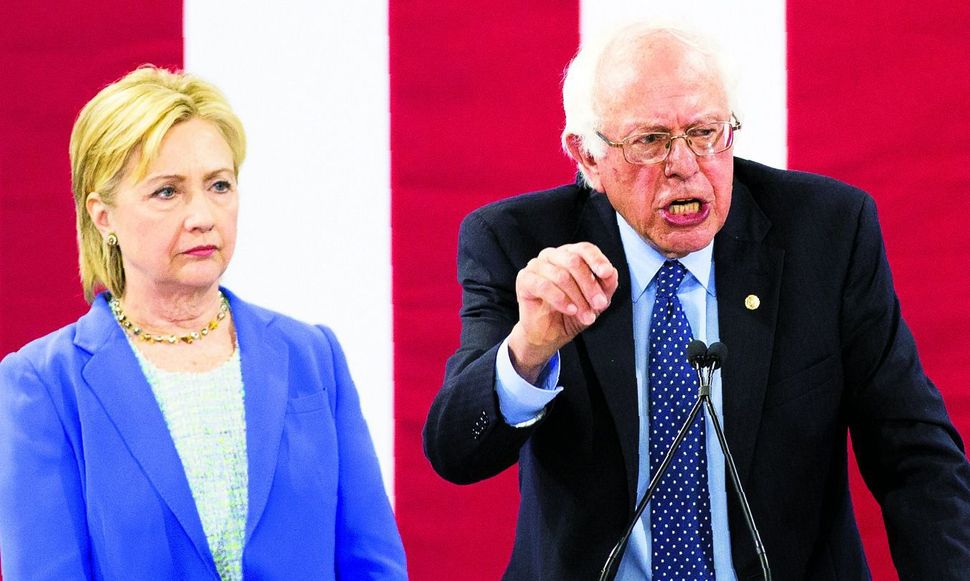 After a chaotic, crisis-ridden day of jeering Bernie Sanders supporters, hacked emails (what is it about Hillary Clinton and emails, anyway?) and a party leader humiliatingly deposed, the Democratic Party formally opened its Philadelphia convention on July 25 and quickly melted into rapture.

For most onlookers, first lady Michelle Obama opened the emotional floodgates late that evening. In a speech destined for the pantheon of American oratory, she spoke about raising her daughters in the White House, about the human side of the presidency and the meaning of leadership. Her commanding presence largely silenced the Sanders-Clinton tensions roiling the crowd. Largely, but not entirely.

The rapture had been building before that. Watching the response on Twitter and Facebook, I noticed an emotional eruption as the New Jersey senator Cory Booker declaimed about love and unity. There was another uptick when Sarah Silverman joined Sen. Al Franken onstage for a slyly subversive Jewish comedy sketch.

Speaking personally, though, they had me at “Glory Hallelujah.”

I admit it: I was gobsmacked by the Democrats’ decision to open their convention with the Civil War anthem “The Battle Hymn of the Republic.” As performed by a choir from one of the nation’s oldest African-American churches, it was a masterstroke of spiritual uplift combined with political snark and just a bit of larceny. “Mine eyes have seen the glory of the coming of the Lord”: You can’t listen to those opening words without picturing the author, Julia Ward Howe, watching a column of Union troops marching off to fight and die in order to redeem America from her original sin of slavery. Summoning that image, the convention planners were reminding us of what our politics is ultimately supposed to be about.

For that matter, you can’t hear those words without picturing a tragic Abraham Lincoln, stooped in grief over those boys he’d sent off to die, battling to preserve a nation torn apart by bigotry and hatred. And that, in turn, has to remind us of what’s happened to the Party of Lincoln. And of who deserves to claim the mantle of Lincoln today.

We remember, too, that those words — “Mine eyes have seen the glory of the coming of the Lord” — were the last words ever spoken in public by Martin Luther King Jr. They came at the very end of his soaring “Mountaintop” speech in Memphis, Tennessee, on April 3, 1968, the night before he died. “We’ve got some difficult days ahead,” King said. “But it really doesn’t matter with me now, because I’ve been to the mountaintop. And I don’t mind.”

The speech was, in a way, King’s summing up of his too-short journey, ending in his eerie premonition of his own death: “I’ve seen the Promised Land. I may not get there with you. But I want you to know tonight, that we, as a people, will get to the Promised Land. And so I’m happy, tonight. I’m not worried about anything. I’m not fearing any man. Mine eyes have seen the glory of the coming of the Lord!”

Remember: King’s mission in Memphis wasn’t strictly a civil rights crusade. He was there launching what was meant to be the next stage in his life’s journey, fighting for economic justice for all. He had come to Memphis to help lead a labor struggle by sanitation workers striking for a wage increase and clean lunchrooms. He was there to march alongside the national president of the sanitation workers’ union, Jerry Wurf of the American Federation of State, County and Municipal Employees. Wurf, the Brooklyn-born labor militant, marched in the streets of Memphis with King, the Southern black preacher. Wurf was at King’s side during that last speech.

It is, in its way, a recurrent, enduring image in America’s battles for social justice: the visionary, inspirational movement leader marching arm-in-arm with the crotchety Jewish socialist from Brooklyn. We’ve seen it again and again over the years: Eugene Debs and Morris Hillquit; Margaret Sanger and Emma Goldman; Franklin Roosevelt and Sidney Hillman (okay, Hillman was from Chicago); King and Wurf.

This year started out looking like the latest version of that old story, a pairing of feminist icon Hillary Clinton with the crotchety, Brooklyn-born Jewish socialist Bernie Sanders. True, it was a competition, not a partnership. Still, it promised to be a friendly, almost affectionate rivalry. Remember the CNN debate in Las Vegas last October, when Sanders told Clinton that Americans were “sick and tired of hearing about your damn emails”?

And here is where the race jumped the tracks and departed from the historical pattern: The movement icon and the crotchety Jewish socialist switched roles. Not that Clinton became a Jewish socialist. But she did become a gray presence, doggedly operating the levers and flywheels of politics, succeeding on the ground without ever taking to the sky, more union boss than preacher.

Sanders, on the other hand, blossomed into a cultural phenomenon, the unlikely darling of a generation that had never before rallied to a cause. The cranky grandpa became a rock star.

In part this was because his ideas were the old, obvious truths of earlier generations that had somehow disappeared from our public discourse: that the necessities of life should be accessible to ordinary people; that government should protect citizens from the predations of the powerful; that Americans really do have a right to life, liberty and the pursuit of happiness. These things had been so out of reach to so many for so long that simply stating the obvious had a magical appeal to his naive, inexperienced followers.

It should have surprised no one that when this pied piper brought his children’s army to the great showdown in Philadelphia, only to surrender his sword and tell them all to grow up and get real, the result would be chaos. Their eyes had seen the glory of the coming of what ended up looking like a tired old grandpa. The sight was agonizing.

The fact is that all those things the old Jewish socialist told them are true. But there’s one more truth that another old Jewish preacher once taught, and it’s a lesson that’s essential for the rest to make sense, for that painful moment in Philadelphia to have meaning, for the young Bernie warriors to find their place in the continuing march of history. It’s in the words of the kindly Rabbi Tarfon of Yavneh: You are not obliged to complete the task — but neither are you free to abandon the fight.